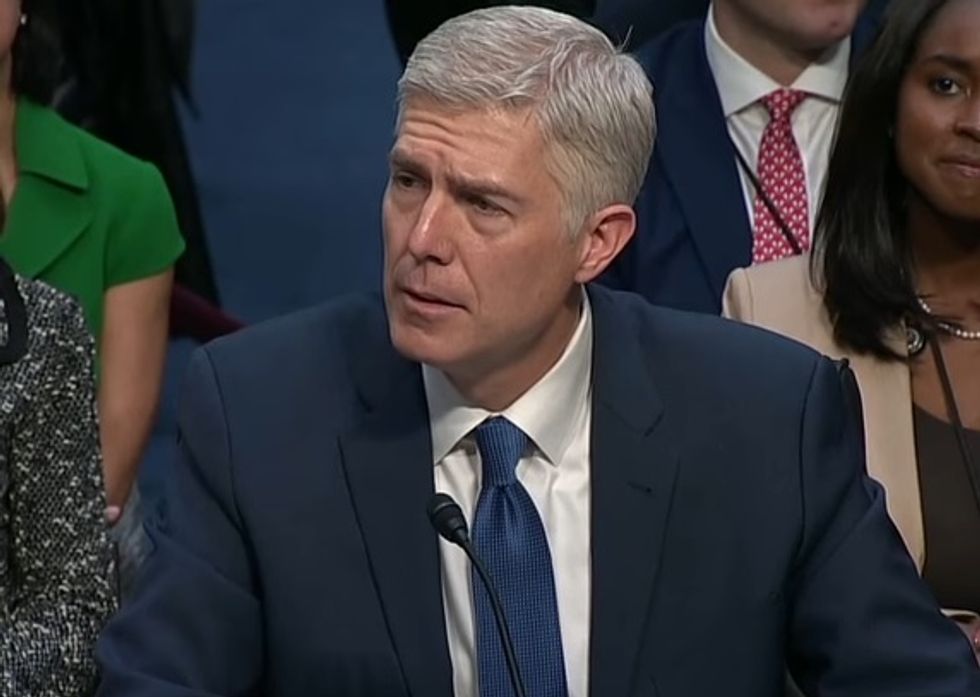 Lurch. That's who he reminds us of.

While House hearings investigated whether the president of the United States got his job with the help of Russia, the Senate Judiciary Committee started its hearings on the nomination of Not Merrick Garland, aka Neil Gorsuch, to the Supreme Court. The actual questions to the nominee start today; Monday was all about the opening statements, with Republicans telling Democrats they need to do their Constitutional duty and give Gorsuch a fair hearing and vote based on his extensive qualifications, and Democrats saying "Surely you are shitting us" and noting these hearings shouldn't be happening at all, what with Republicans having held Antonin Scalia's seat on the court open for over a year.

California Senator Dianne Feinstein summed up how most Democrats felt about the hearings, at least when translated into language fit for the Senate. “I just want to say I’m deeply disappointed that it’s under these circumstances that we begin our hearings,” she said, noting that Gorsuch is only having confirmation hearings this week because of Republicans' “unprecedented treatment” of Garland.

That's all in the past, though, according to virtually every Republican, including the loathsome ambulatory sack of lies and pus that goes by the name Ted Cruz, who explained Gorsuch actually had "super-legitimacy" thanks to the Republican refusal to hold hearings for Garland last year. You see, since he was chosen by a president who was elected by the American people in an actual election last year, rather than chosen by a president who had been elected twice but was in (barely) the final year of his term when Scalia died, that gave Gorsuch extra-special legitimacy as a candidate, and it would be terrible, just terrible, were Democrats to oppose his speedy confirmation. The New York Times reminds us that Cruz was among several Republicans who last year argued it would be perfectly normal to refuse to fill the seat on the Supreme Court for four years had Hillary Clinton won the election. Also, Cruz offered this bit of genius about why it's totally unfair for Democrats to even mention Donald Trump and his potential for judicial entanglements during these hearings, the monsters:

For his part, Lindsey Graham explained it was silly to think Republicans were holding the Supreme Court seat open for a Trump nominee, because duh:

“If you believe this has been a great plan to get a Trump nominee on the court, then you had to believe Trump was going to win to begin with,” Graham said.

So really, the delaying was only a tactical matter during the primaries, we guess, and then during the general election it was more of a habit.

But about this Trump guy: Illinois Democrat Richard Durbin seemed almost resigned to Gorsuch's confirmation, warning the likely justice that Trump -- who doesn't have a clear idea how to Constitution at all -- will present some new challenges when it comes to executive overreach: "You’re going to have your hands full with this president [...] He’s going to keep you busy."

So now that we're finally getting to the questions, what can we expect to come up during Gorsuch's hearing today, beyond the basic stuff about how he shouldn't be sitting in a confirmation hearing in the first place? In addition to the usual abortion-guns-campaign finance-affirmative action stuff that you'd expect in any hearings, there's likely to be a focus on Gorsuch's supposed adherence to the impossible doctrine of "originalism," which requires judges to apply the Constitution as they believe the Founders would have intended. In practice, this amounts to pretending the Founders would have had thoughts about surveillance of cell phone networks, modern medical and financial practices, and women and black people having rights.

In addition, look for a lot of questions about Gorsuch's participation, when he worked at the Justice Department, in the drafting of a George W. Bush signing statement on a 2005 law prohibiting the use of torture. The statement essentially said the president could decide to ignore the law and use "enhanced interrogation" if he thought it necessary during wartime; emails released to the Judiciary Committee last week indicate that particular line of the statement was actually contributed by another Justice Department lawyer, while Gorsuch had pushed for the signing statement as a way of underlining the Bush administration's belief that a law banning torture wasn't really all that necessary in the first place since it was “best read as essentially codifying existing interrogation policies.” So expect a lot of questions about just how open Gorsuch might be to letting presidents order torture as a matter of executive authority, especially considering Donald Trump's fondness for "waterboarding and worse."

Also look for questions from Democrats about Gorsuch's tendency to side with corporations against employees (or anyone else), as personified in his vote on a case involving Alphonse Maddin, who you'll hear called the “frozen trucker" a lot this week. Gorsuch was the one judge to rule against Madddin (on a three-judge appeals panel that ruled in his favor) in a case involving whether Maddin could sue to get his job back after being fired by his employer. And it was a doozy of a case:

Hauling a load along Interstate 88 in Illinois for a Kansas-based trucking company, Maddin missed a refueling stop and pulled to the side of the road to decide his next step. In the subzero weather, the brakes on his trailer froze. He radioed for help, and the dispatcher told him to stay put and that a repair truck would come. Maddin said he awoke hours later in the unheated truck cab, numb and with his speech slurred. Ignoring orders, he unhooked the truck from the trailer and drove off to look for help. He turned around when the repair truck came.
Later he was fired.

Maddin, once well thawed, sued for unfair dismissal, citing Labor Department rules protecting an employee who “refuses to operate a vehicle because . . . the employee has a reasonable apprehension of serious injury to the employee or the public because of the vehicle’s hazardous safety or security condition.” The other two judges on the appeals panel ruled that described Maddin's situation exactly, but Gorsuch took a strict letter-of-the-law approach and voted against him, since Maddin actually was operating his vehicle to get away from the frozen trailer, not refusing to operate the vehicle. If he'd sat there and frozen to the point of injury or death, then he might have a case, more or less.

“There’s simply no law anyone has pointed us to giving employees the right to operate their vehicles in ways their employers forbid,” Gorsuch wrote. “Maybe the [Labor] department would like such a law, maybe someday Congress will adorn our federal statute books with such a law. But it isn’t there yet. And it isn’t our job to write one — or to allow the department to write one in Congress’s place.”

Gorsuch's defenders insist the decision show what a principled guy he is, ruling in accordance with the law as written even though Maddin is a very sympathetic party, while Democrats are saying the decision shows Gorsuch is willing to bend over backwards to find reasons to let corporations get away with misbehavior. Yr Wonkette is not a lawyer, but we'd say Maddin's vehicle -- the whole truck, not just the tractor part -- was unsafe to operate and was going to kill him if he remained sitting by the side of the road, so w're willing to call Gorsuch's nitpick a hell of a stretch to deny Maddin the appeal.

So those are a few things we can look forward to; one thing we should not count on is a visit from a time-traveling History Rectification Squad to declare the whole proceeding a farce, sending us all back to 2016 and forcing Senate Republicans to give Merrick Garland a hearing and vote.