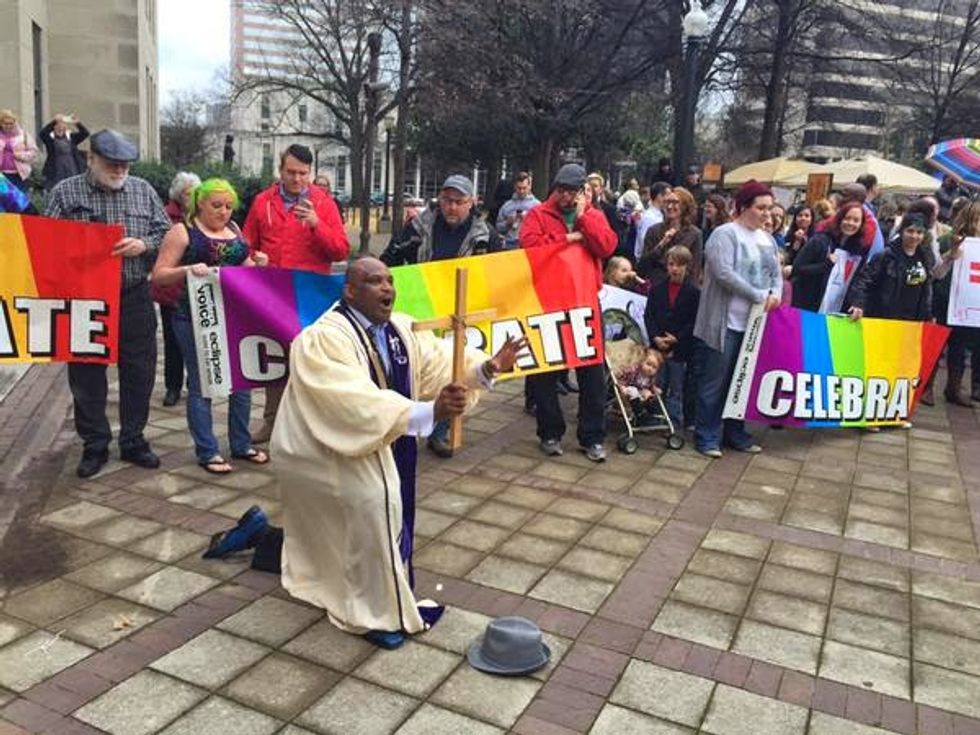 That friendly man pictured above is doing the hard work ofexorcising the homosexual demons out of Alabama because YOU GUYS, the state officially has marriage equality! REPENT!

Sunday night, Alabama Supreme Court Chief Justice Roy Moore -- America's greatest Ten Commandments-protecting jurist, with a special version of the First Amendment just for Christians -- bravely followed through on his promise to block the gay courthouse door, in order that the fundamentalist Christians of Alabama might be saved from the devil's wrath and raining hellfire and whatnot. You know, the typical stuff that happens when Brandon and Derek tie the knot.

Moore issued a letter demanding that probate judges around Alabama REFUSE to issue marriage licenses, once the stay on their marriage equality ruling expired. They all got the letter, but we guess Moore's last minute temper tantrum didn't work, because GAY MARRIAGES ARE HAPPENING IN ALABAMA RIGHT NOW:

The U.S. Supreme Court on Monday refused to stop marriage equality rulings in Alabama from going into effect this morning, denying a stay in the pending federal court cases there.

The move comes even as the state’s Supreme Court chief justice, Roy Moore, has purported to bar probate judges there from granting same-sex couples marriage licenses.

It was not immediately clear how probate judges across the state would react to the seemingly conflicting orders — although one, a spokesperson in Montgomery County Probate Judge Steven L. Reed’s office, confirmed to BuzzFeed News that they are issuing marriage licenses to same-sex couples this morning. Jefferson County Probate Judge Alan King says his office will issue licenses as well, The New York Times reports. Madison County Judge Tommy Ragland’s office confirmed to BuzzFeed News that they will issue same-sex marriage license between 8:30 a.m. and 4:30 p.m. CT today.

This is all wonderful and happy, and even more fun because you just know that Roy Moore cannot SEE straight today, all he can see is the gay, in front of him, behind him, possibly in his own closet, as Alabama's biggest newspaper suggested last night. Roy Moore stood in that courthouse door, like George Wallace before him, and that was not a good place to stand apparently, because a big gay steamroller of justice and goodness just cold knocked him on his ass.

We are also enjoying the fact that Clarence Thomas is sad about this, as he was the justice Alabama had to beg to stop this hurricane-force storm of gay from drenching Alabammy. Thomas referred it to the full Supreme Court, who by a vote of seven to two, said NOPE, let the stay expire, bring on the gay. The only other justice who agreed with Thomas was Antonin Scalia. Court watchers have noticed lately that it's always those two, and only those two, and that Alito, no friend to the gays, has been silent on the issue. How that will play out when the Supreme Court rules on marriage equality later this year, who knows, a 7-2 decision for equality is within the realm of possibility.

But honestly, besides the fun that comes from watching wingnuts squirm and stomp, the real joy is for the couples, many of whom probably imagined this day would never come in their home state. After he performed their wedding, this judge asked if he could get his picture made with the couple, according to the Twitter:

He is obviously A Activist Judge and Roy Moore will make sure he is INPEACHED, but for now he seems to be pretty happy to be part of that couple's special day, and also on the right side of history. Maybe he thought Moore's letter was junk mail and threw it out. Oh well, happy gay marriage day, Alabama, the rest of the country is thrilled for you and Mississippi is very, very scared.