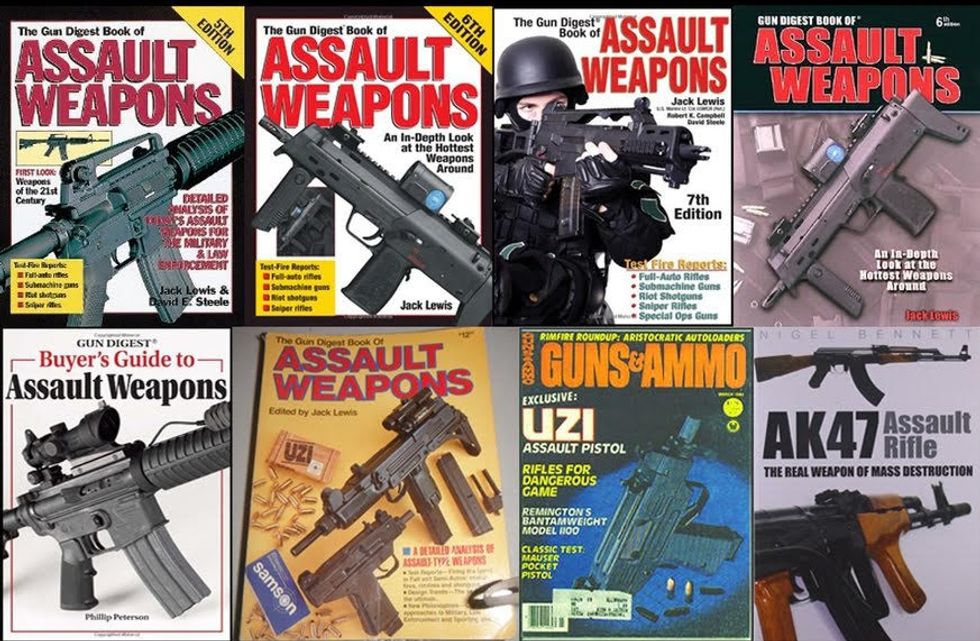 The Supreme Court has declined to hear challenges to state bans on assault-style rifles in Connecticut and New York, leaving in place lower court rulings that the laws don't violate the Holy Second Amendment. Get ready for a barrage of tweets and Facebook posts screaming "What part of 'shall not be infringed' doesn't the Supreme Court understand?"

This is the second assault rifle ban the Court has left in place since December, when it also declined to hear a challenge to a Highland Park, Illinois, law that restricted sales and ownership of assault-style semiautomatic rifles and high-capacity magazines. In that case, the federal appeals court decision that was left in place said residents still had access to plenty of other legal weapons for self-defense, such as handguns and other long guns.

New York and Connecticut are among seven states (plus the District of Columbia) that outlaw assault weapons; the two states' bans were put in place after the massacre at Sandy Hook Elementary in 2012. In the four intervening years, neither state has attempted to institute tyranny or conduct a genocide, although both are undoubtedly right around the corner. The Connecticut law

criminalizes the sale or possession of semi-automatic rifles that accept detachable magazines and have at least one other specified feature, such as a forward pistol grip. It lists 183 specific prohibited weapons.

“The category of firearms Connecticut bans are united by nothing other than the possession of safety-enhancing features that serve to make them more reliable and better suited to home defense,” the challengers argued.

Connecticut Attorney General George Jepsen urged the Supremes to reject the appeal, since the law only affects a subset of weapons available for sale, arguing, “These guns have an established track record of disproportionate use in the most serious gun crime incidents -- mass shootings and killing of law enforcement.” (His boy Elroy had no comment.)

The New York law is similar to Connecticut's, although it doesn't list specific makes or models of guns. Bloomberg Politics notes that although the AR-15 derived semiautomatic rifle used in last weekend's massacre in Orlando, the Sig Sauer MCX, isn't included in the list of weapons banned in Connecticut, "the laws are worded broadly enough to potentially cover the weapon."

Good heavens -- one might almost get the impression that Antonin Scalia, that notorious gun-grabber, actually meant it when he wrote in the 2008 District of Columbia v Heller decision that the Second Amendment doesn't preclude the government from placing restrictions on some types of weapons. And while Scalia was not around to decide whether to hear the New York and Connecticut cases, he was one of the two losing votes to hear the 2015 Illinois case. Monday's decision to reject the Connecticut and New York appeals came with no comment or dissent from the court, so it's unlikely that the presence of Scalia's ghost would have made a difference.

The Supremes have rather pointedly avoided hearing new cases involving gun rights, seeing as how they haven't taken a Second Amendment case since 2010's McDonald v Chicago. As The Atlantic noted when the Court declined to hear that Illinois case in December,

If the justices had accepted one or two firearm-related cases or their silence was limited to a single term or two, it would be irresponsible to speculate. But a five-year silence on the Second Amendment amid a number of major cases suggests something deeper is at work. Maybe it’s the high-profile mass shootings since McDonald. Or the rise in shootings in Chicago since they struck down the city’s handgun ban. Or maybe they’re waiting for more consensus to emerge among the federal circuit courts before revisiting the questions. Or maybe they’re just waiting for the right one.

Hillary Clinton has renewed her call for a federal ban on military-style weapons, and now we all get to argue forever over what an 'assault rifle' is and why everyone needs one, for freedom.

The main thing to remember here, of course, is that it's impossible to ban assault-style rifles, which don't even exist anyway, but absolutely must remain legal for freedom to be preserved. We now welcome all of the usual complaints about how nobody calls for the banning of cars after car crashes. Besides, the real problem is anti-depressant medications, false flag attacks, or Muslims. It's never guns, which are mere tools, and we never regulate tools.