Supreme Court Won't Let Gun Humpers Have Any Fun At All :( 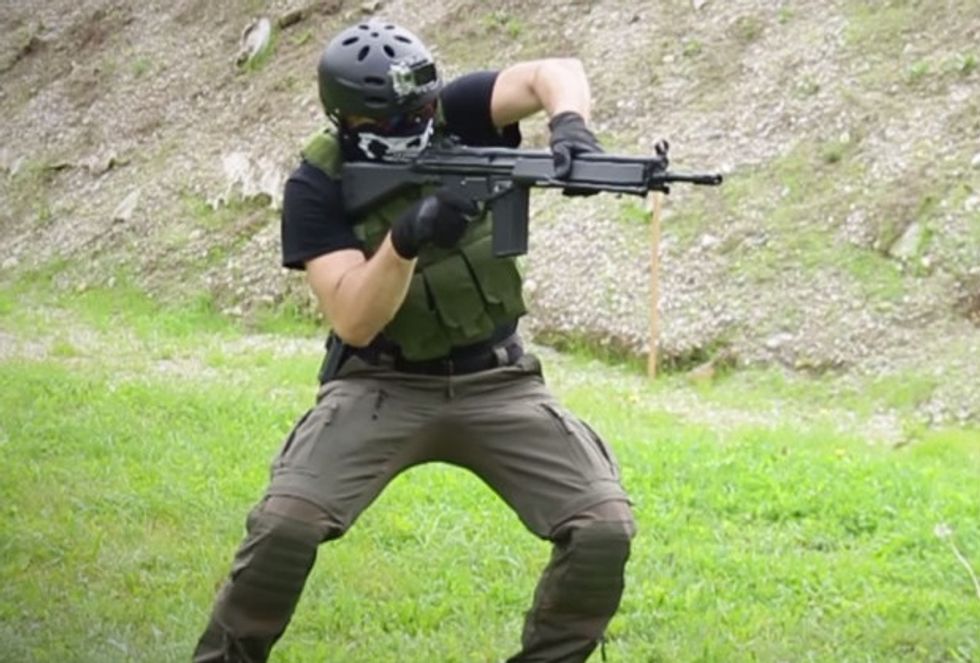 The Supreme Court quietly refused today to hear two cases involving guns, turning away attempts by gun humpers to establish a right to own semiautomatic assault-style rifles and to force Florida to allow open carry of handguns. Guess that means that even Donald Trump wants to take away your guns, so please go buy more. Since the Supremes ruled in the 2008 DC v Heller decision that the Second Amendment protects an individual right to own firearms, it hasn't taken any other cases aimed at expanding that decision. Today's refusal to take cases from Maryland and Florida appears to affirm the Heller decision's acknowledgement that the Second Amendment is not an unlimited right to "keep and carry any weapon whatsoever in any manner whatsoever and for whatever purpose[.]"

The Maryland case had argued that the state's ban on assault weapons (a contentious phrase for gun humpers, whom we invite to stick it in their ejection ports) was unconstitutional. The federal appeals court held, in a 10-4 vote, that since Heller specifically said the government could ban M-16s, the fully automatic military weapon, then limitations on sales of its semiautomatic civilian version and similar assault-style weapons were also justified:

"We have no power to extend Second Amendment protection to the weapons of war that the Heller decision explicitly excluded from such coverage," Judge Robert King wrote for the majority.

The Supreme Court has declined to hear appeals to laws banning the sale or possession of assault-style rifles in Connecticut and New York. Guess that issue's settled, then.

Maryland banned assault-style weapons and magazines with a capacity of more than 10 rounds after the massacre in Newtown, Connecticut, and in 2016 the Supremes also refused to hear constitutional challenges to state assault-weapons bans in Connecticut and New York. The Maryland ban was challenged by a group of gun enthusiasts and firearms dealers, with help from the National Rifle Association, because What About The Children's guns? The poor dears lost, despite their appeal's sad cry of "self-defense":

Maryland has banned the most popular semiautomatic rifles and magazines -- arms that are indisputably in common use for self-defense -- from the homes of law-abiding citizens[.]

Apparently the Supremes just don't care that a lot of people sincerely believe that only a badass semiauto rifle with a big honking magazine can keep them safe in their homes.

The other case, from Florida, involved a Florida dorkwad named Dale Lee Norman, who was arrested in 2012 for carrying a holstered handgun in public, ready for whatever shootout might come his way. Florida only allows concealed carry of licensed handguns, so Norman sued to protect his Gpd-given right to have a shootin' iron on his belt. The Florida Supreme Court said, no, your sacred rights are not being infringed, and if you want to carry a gun, you can darn well get a concealed carry license, for which in Florida virtually any breathing adult qualifies anyway.

NRA Wants You To Shoot Protesters, The Media, People Of Color, And Teachers! God Bless.

The evil liberals are coming to get you, better give the NRA some money!

The Supremes did not comment on the cases, and there's no breakdown of which justices decided not to hear them. It is indeed a very sad day for gun humpers -- they don't have an absolute right to any thunderstick they want, and the jackbooted thugs of government can even prevent them from walking around with their manhood replacements hanging out in plain sight. We'll get right back to you on the inevitable surge in crime rates, government tyranny, or possibly just video whining from Dana Loesch that will no doubt follow the Court's insane decision today.

In happier news, the Washington Post reports that even though the Kenyan Usurper is no longer threatening to take your guns away, guns were among the hottest items on a lot of Black Friday wish lists this year, with the FBI receiving 203,086 requests for instant firearms background checks Friday, a new one-day record. Be extra careful about letting the kids shake those packages under the tree!