Target's Union-Busting Robots, And Other Updates On Our New Robot Overlords 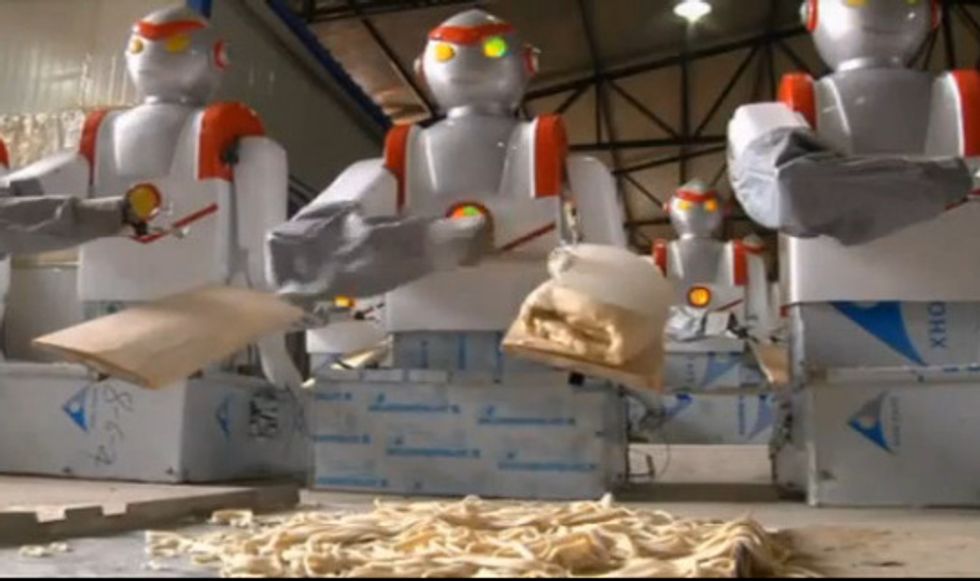 Life is good but it's not all roses, puppy dogs and Pope memes. And while the Robot Revolution may have dropped on our Threat List (currently found between "Dennis Miller" and "unnecessary paperwork"), please don't think our Corporate Persons have forgotten about their usefulness in our beloved free market. You can still sleep tight. But always remember that robots don't really need to sleep because they're not weak like you.

Last week, pharmacy workers at a Brooklyn Target voted to join a Union. Predictably upset at the idea of sitting down with its scamp workers and forking over a couple of extra sick days, the retailer is appealing the validity of the election to the NLRB.

The standard appeals process and worker intimidation will likely run its course. But what would really be great for Target is a group of workers who didn't even take sick days or want to bargain over wages and working conditions. A crack customer service crew who didn't have burdensome things like religious holidays, unsettling birthmarks, or families.

Last week, Target announced a partnership with the rich nerds at Techstar to help makeover all of its important Corporate Person qualities like "supply chain," "analytics" and "profits y'all." And then there's this:

[P]erhaps more intriguingly, [Target CTO Casey] Carl and other Target executives hinted at what’s coming down the pike for the retailer. Target is working on a “concept store” that will open between 18 and 24 months from now that could include robots (conveniently for Target, Techstars has a program specifically for robotics) and other sci-fi features, though Target was parsimonious with details.

Um, I thought they called it "sci-fi" because it wasn't real? Clearly I'm a dummy so just feed me my medicine and point me to the aisle with the X-Treme Doritos and lightsabers.

In a marriage made in dystopian heaven, it seems totally appropriate to pair a soulless machine with Target's soul-sapping red vest. I kind of feel sorry for the thing with no feelings. Target: You can get everything there except eye contact.

Sure, our anointed Corporate Persons populate our planet with fake robot persons, but maybe the rest of us should look in the mirror. Us. The slovenly, fleshy consumer people feeding at the troughs of cheap tube socks and expensive endangered fish. We like robots too. Especially when they can help us accumulate more shit while we sit on our asses, like this Australian woman:

Lucy Kelly, 22, was the face and voice of the unusual-looking device - an iPad attached to a remote-controlled Segway-style scooter - which she parked outside the store 27 hours before the iPhone 6s and 6s Plus went on sale.

Of all the terrible consumers, are there any worse than the New Apple Product People? The people who camp out in order to pay $600 so their #TBTs will look infinitesimally clearer in a few months. Say what you want about the Black Friday People. At least they've had decades of stagnant wages driving them to monstrous bloodletting over $100 flat screens.

Kelly avoided a way to spend 27 excruciating hours with these iPhone people, so she should probably be lauded. She then proclaimed that she is the future, presumably before narrowly evading death at the hands of some freakishly venomous and prehistoric Australian platypocupus.

But before you give all of the kudos to Kelly for maximizing her free time, ask yourself if you really want to wait in line with homemade Johnny 5's who our Supreme Court will probably rule have the right to concealed carry of all the firearms. Not to be outdone, of course someone from the Bay Area did the exact same thing because everyone in Silicon Valley is a visionary or annoying fraud copycat I guess.

Thumbs up or down to Ms. Kelly? This one's up to you, MacWonkers. We just don't want our sexts to automatically go to the iCloud, we're on a family plan you inconsiderate tech visionaries!

Noodlebot To Inspire Your Love For Machines, Then Probably Kill You

Finally, we should end on a lighter (but possibly deadly) note. So let's take a detour from looking at how American companies enable our inevitable robot overlords and take a look at our friends in China. This week, Business Insider posted found 2012 video of Noodlebot, a robotic noodle-slicing maestro. Noodlebot, not a Peggy Noonan nickname, is mesmerizingly off-putting, not unlike Pegs herself. But it also slices noodles at a unmatched pace.

Noodlebot. Displacing workers but making noodles quick and easy. The American Way. Are you hooked? Good.

This just in, Marty McTaintDew has purchased Noodlebots and all basic noodle components. Ramen is now $300. Also The American Way. Too bad so sad Foodies and spaghetti-eating dogs on dates. (This report has not been confirmed.)