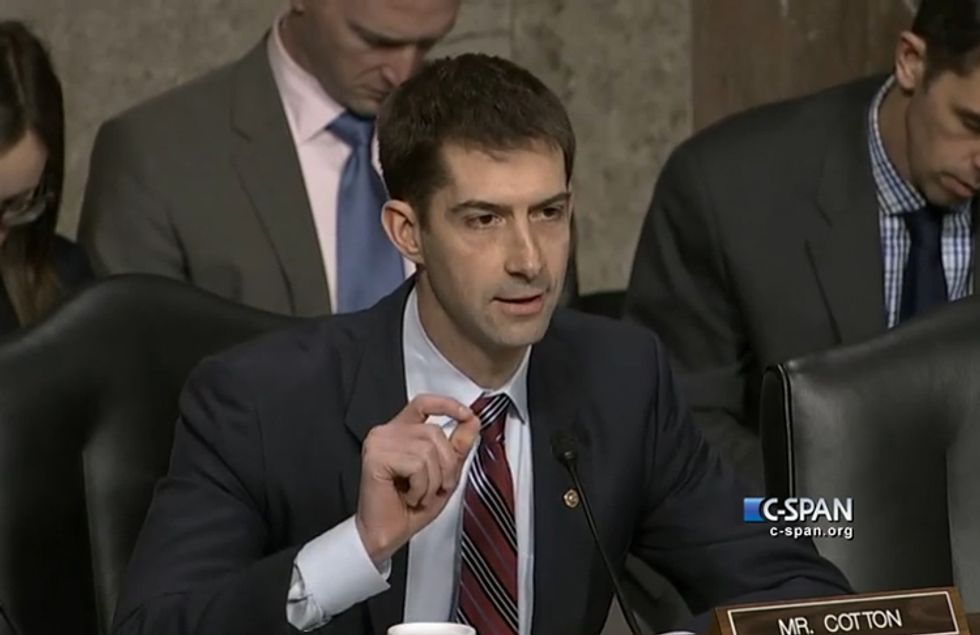 Teabagger Tom Cotton, an actual elected senator from Arkansas, proved this week that, contrary to media reports and the lies of actual terrorists, there is absolutely no way anyone in the Muslim world has ever been moved to take up arms (or suicide vests, or car bombs) against America because of the prison at Guantanamo Bay.

In a hearing Thursday, Cotton dazzled the Senate Armed Services Committee with an amazing display of logic, baffling Principal Deputy Under Secretary of Defense for Policy Brian McKeon and demonstrating once again that Barack Obama doesn't love America enough.

Cotton asked McKeon to explain for the Committee, "How many recidivists are there at Guantanamo Bay right now?" And since no one who's currently at Guantanamo has ever been there more than once, that would be "zero."

Then Cotton slowly closed the Noose of Logic around McKeon:

"How many detainees at Guantanamo Bay are engaging in terrorism or anti-American incitement?" He answered his own question: "None, because they're detained."

Oh wow. And if we never let any of them out ever, they can never terrorist again, especially not the ones who have already been proven not to have actually done anything, but may have been radicalized by being treated like animals.

Cotton then asked, "How many detainees were at Guantanamo Bay on September 11, 2001?"

The answer, of course, was zero; the facility had not yet been established. Cotton argued that this fact disproved the theory, held by many terrorism analysts, that Guantanamo provides propaganda for terrorists. Because terrorism existed before Gitmo did, he implied, therefore Gitmo could not inspire terrorism. "Islamic terrorists don't need an excuse to attack us," he said.

Oh, BURN! It is impossible for Gitmo to recruit terrorists, because terrorism predates Gitmo! They hate us for our freedom, too! Cotton summed up the inevitable conclusion: Barack Obama's desire to close Guantanamo "is not a security decision, it's a political decision based on a promise the president made during his campaign." A promise made to all those voters in Guantanamo, probably. For his part, Cotton thinks that

"The only problem with Guantanamo Bay is that there are too many empty cells," Cotton continued. "As far as I'm concerned, every last one of them can rot in hell. But as long as they don't do that, then they can rot in Guantanamo Bay."

We're not sure that Cotton would be very impressed by the tricky loophole that Vox's Zack Beauchamp points out, though, namely that "it's possible for terrorists to recruit on more than one thing." Since when, Mr. Beauchamp? Isn't the truth simply that Muslims hate America for our freedom, and even if the prison at Guantanamo went away tomorrow, the World Trade Center towers would still have been hit before the prison opened? Some "logic," Mr. Beauchamp! Why do you hate America?

Oh sure, there are those, like former Air Force interrogator Matthew Alexander, the pseudonymous author of the indispensable book How to Break a Terrorist, who have said that detainees he questioned said that both Gitmo and Abu Ghraib had been part of the reason they hated America, but why would you trust a terrorist anyway? Alexander also wrote in 2012, "The longer it stays open the more cost it will have in U.S. lives," and we would just like to point out that we haven't lost a single American life to terrorists crashing planes into the World Trade Center since then, so that pretty much proves that Tom Cotton is a logic genius.

Has Mensa offered Sen. Cotton a membership yet? They should, so he can laugh right in their elitist faces and reject it.