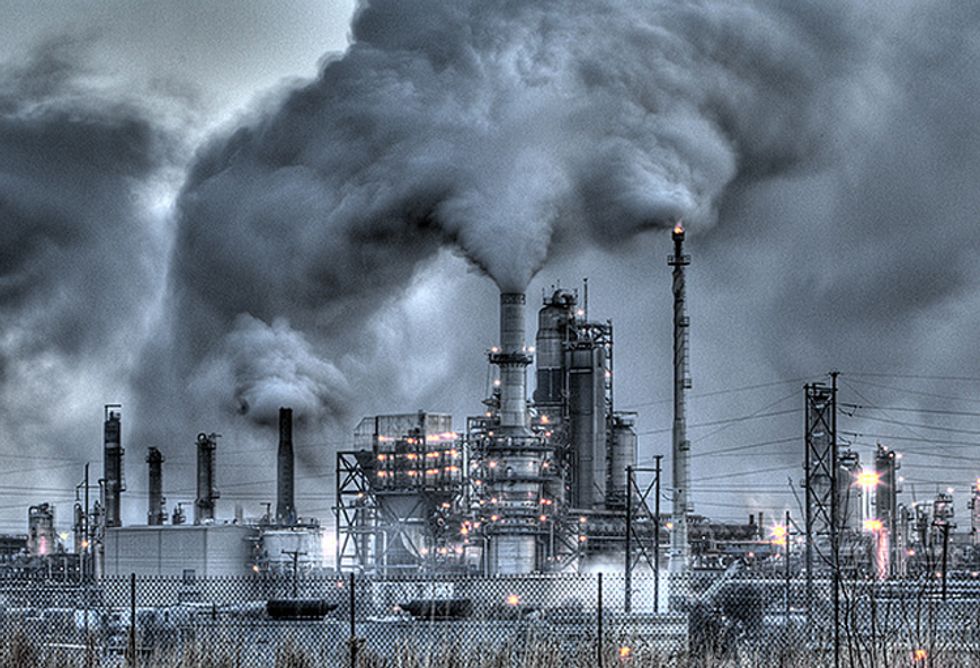 We could show you Scott Pruitt's face. But this is his true essence.

Sure, we've already described the nascent Trump administration as a Lovecraftian horror, forming itself from a twisted concatenation of the very worst unholy abominations like some sort of sludge-creature in a late-night horror movie. But now Trump's somehow managed to top himself, choosing as his nominee for administrator of the Environmental Protection Agency Scott Pruitt, a man whose entire career has been the very antithesis of the first two words in the name of the agency Trump wants him to run. You can't say Pruitt is in the pocket of Big Oil -- it's more like he wears Oklahoma's oil and gas extraction industries as a second skin. Which he rubs heavy crude into willingly, with no fear of getting the hose. Pruitt's appointment as EPA administrator makes Ronald Reagan's secretary of Interior, James Watt, look like John Freakin' Muir. Just how bad is Pruitt? Former Obama advisor Dan Pfeiffer has some idea:

How closely allied to what Molly Ivins called the Oil Bidness is Scott Pruitt? For starters, while he'd long been Big Oil's close personal friend in Oklahoma government, he first came to national attention in 2014, when a New York Times investigation revealed that back in 2011, a very stern letter Pruitt sent to the EPA -- complaining the agency was exaggerating the amount of pollution caused by oil drilling in Oklahoma -- had actually been written by lawyers for one of the state's biggest oil bidnesses, Devon Energy. Devon's lawyers sent it to Pruitt, who copy-pasted it to his official Oklahoma Attorney General stationery with a couple of minor changes and his signature, then dutifully sent it off to the EPA. Beyond that, the Times also found several examples of other letters "by" Pruitt which had been drafted by oil and gas lobbyists and sent off under his signature to "the Interior Department, the Office of Management and Budget and even President Obama," because as Molly Ivins also observed, that's what being a public servant has become: Dancing with the ones what brung you.

taken a lead role in coördinating a twenty-eight-state legal challenge to the Obama Administration’s regulations on fossil-fuel pollution, which are at the center of its larger effort to stem climate change.

You see, while Pruitt hasn't gone quite as far as his new idiot boss and said that global warming was made up by China to keep the U.S. at a competitive disadvantage, he absolutely rejects the scientific consensus that it's happening and that human activity has caused it. Just a couple of examples, from Mother Jones, of Pruitt's thoughts on how science works:

"The EPA does not possess the authority under the Clean Air Act to accomplish what it proposes in the unlawful Clean Power Plan. The EPA is ignoring the authority granted by Congress to states to regulate power plant emissions at their source. The Clean Power Plan is an unlawful attempt to expand federal bureaucrats' authority over states' energy economies in order to shutter coal-fired power plants and eventually other sources of fossil-fuel generated electricity." [Pruitt press release, 7/1/15]

"Scientists continue to disagree about the degree and extent of global warming and its connection to the actions of mankind. That debate should be encouraged -- in classrooms, public forums, and the halls of Congress." [Pruitt National Review op-ed, 5/17/16]

He seems nice, if you're in the oil and coal bidness. Putting Pruitt in charge of the EPA isn't simply the fox guarding the henhouse. It's giving the fox a fleet of bulldozers, several General Electric M-134 miniguns and white phosphorus grenades, and parking him outside the whole damn poultry plant.

[wonkbar]<a href="http://wonkette.com/609102/donald-trump-and-al-gore-will-heroically-save-world-from-global-warming-sky-fires-hooray"></a>[/wonkbar]Hey, remember how way back on Monday it looked like, just maybe, Trump might have let Al Gore talk some sense into him about climate? Psych!

Scott Tong of public radio's Marketplace described the mood among many EPA workers in response to the announcement of Pruitt's appointment as "gloom. Beyond just the regulations, there's fear that the agency will halt or stop enforcing the rules currently on the books." (It was a live interview, so we'll forgive the redundancy. This time).

But -- this is a big but, and we cannot lie -- while there's no question Pruitt and Trump want to go at environmental regulation with sledghammers, crowbars, and probably a wheelbarrow full of C-4, and for all the considerable damage they're definitely out to wreak, we need to keep some perspective. This is merely a massive catastrophe, not quite an extinction level event. What we mean is that, as Tong also points out, there are actually market forces already in place that will at least reduce the amount of devastation Pruitt and Trump can do. They can repeal all the regulations on coal they want (and that will not be as easy as they pretend) but the lower cost of natural gas for power plants is likely to prevent coal from ever regaining the prominence it once had in our energy mix. That means less carbon going into the atmosphere. Solar and wind are also continuing to expand, and as their cost per kilowatt hour continues to drop, they'll displace dirtier fuel. And blue states will continue to promote cleaner energy, so there's that. And other, saner countries are still going to act as if science is real, even if the USA opts out of reality.

Also, at the risk of being hugely over-optimistic, there's an outside chance that the Senate might not confirm him. This is why everyone needs to have their senators' offices on speed dial, dear Terrible Ones. Fight this man's nomination like your grandkids' lives depended on it, because they do.

We're no Pollyannas here -- Pruitt is still going to be horrible, and thanks to the Trump administration's decision to turn energy policy over to the oil and gas bidness, China is almost certain to outpace us in the production of green energy, which will be bad for our economy, too. Maybe Donald Trump can tweet some mean comments at the Sun.

So there's your tiny bit of silver lining. Now back to the doomsday scenario! During the campaign, Trump promised more than once to eviscerate or dismantle the EPA altogether. Scott Pruitt is an experienced lawyer whose career has largely consisted of suing the EPA, and he just might be a dogged enough hater of the agency he's been asked to run that he could tear it apart from the inside.

But just think how many jobs will be created, not just in the energy sector, but also for medical experts treating black lung, skin cancers, and exposure to toxic sludge in the water supply.