Team Romney Quite Sure You People Must Wish You'd Voted For Mitt By Now. Right? RIGHT? 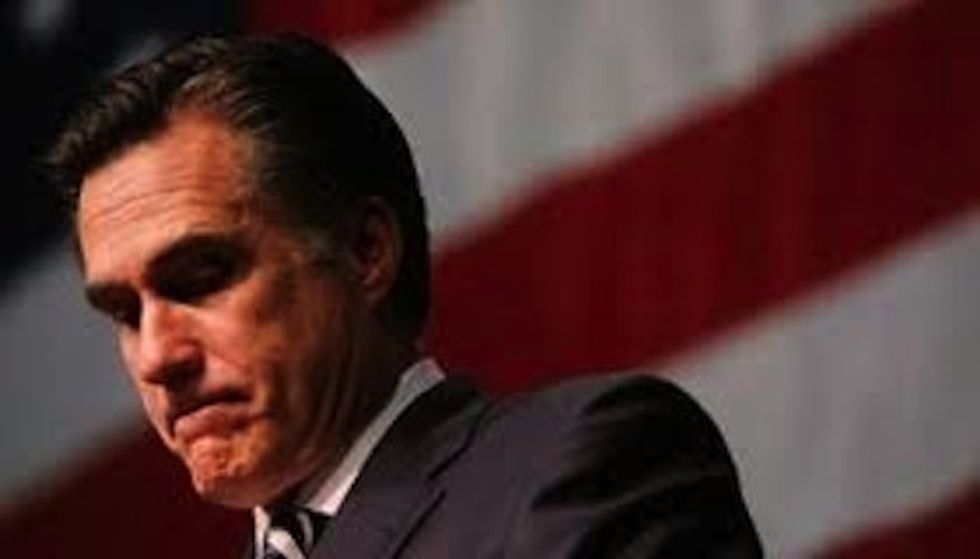 Remember that time Mitt Romney ran for president? Not that he wanted to, of course -- he was against losing a presidential election before he was for it -- but the Romney clan figured it was a good way to kill time until their privately hired lobbyist finished pushing the permits through on their beachfront mansion makeover.

And Romney would have won, too, if it weren't for those meddling voters and that gay wizard math and those pesky unskewed polls. Or if he had been Latino. But le sigh.

Well, thanks to you people insisting on electing O'Bummer AGAIN, we do not have our capitalist unicorns for everyone, or our two-car elevators in every garage, and those damn Messicans have not self-deported themselves yet, and there is also Obamacare a-comin' and DON'T YOU PEOPLE WISH YOU HAD VOTED FOR MITT ROMNEY NOW? The Romney team sure thinks so:

Ten months after Mitt Romney shuffled off the national stage in defeat -- consigned, many predicted, to a fate of instant irrelevance and permanent obscurity -- Republicans are suddenly celebrating the presidential also-ran as a political prophet.

It's pretty much like that one time President Obama was first elected, but then the whole country was all, like, "Damnit, why didn't we make Sarah Palin vice president?" (Oh right. That did not actually happen.)

Even though the Romney team was wrong about, well, you know, everything -- women don't love Mitt, no one loves Ann, and turns out snickering about that time your dad shut down a factory isn't very funny to anyone else, especially not factory workers, and also your baked goods suck -- they are patting themselves on their backs now for being so right about how President Romney would have made America all utopian 'n stuff by now. But noooooooooooo. And now we're all paying the price, and golly darnit to H-E-double-hockey-sticks, there's no way to fix it:

“It’s frustrating because there’s no way to correct it,” Zwick said. “We don’t do what they do in the U.K. and lead the opposition party when you lose. When you lose there is no way to sort of be vindicated. There’s no way to say, ‘OK, well, I didn’t win the presidency but I’m going to continue to fight.’ There’s no fighting. There’s no platform to do that. Fifty million Americans voted for the guy and yet it’s all for nothing.”

Yeah, man, that IS so bogus. Dude comes in second and doesn't even get to be president? What kind of backwater democracy are we? Although, on second thought, you don't need to hold political office to make a difference. Didn't we all learn that from Sarah Palin? In fact, according to the Palin Doctrine, you can do MORE for 'Merica if you quit your job and just blah blah on Fox "News" and then quit that to "share more broadly the message of the beauty of freedom and the imperative of defending our republic and restoring this most exceptional nation." You know, by giving EXCLUSIVE!!!! interviews to the Ghost of Breitbart.

Oh well, it is too late now. (Unless Republicans can finally figure out something to IMPEACH! the president for; fingers crossed!) Now that the Romney team has started to pull its collective self up from the fetal position -- shhhh, Jennifer Rubin, it'll be okay, yes, yes, it's all the fault of the "left-leaning media," there there -- we can join them in wistfully thinking about how glorious America would be if only Romney had won.

Ugh. That's enough of that.