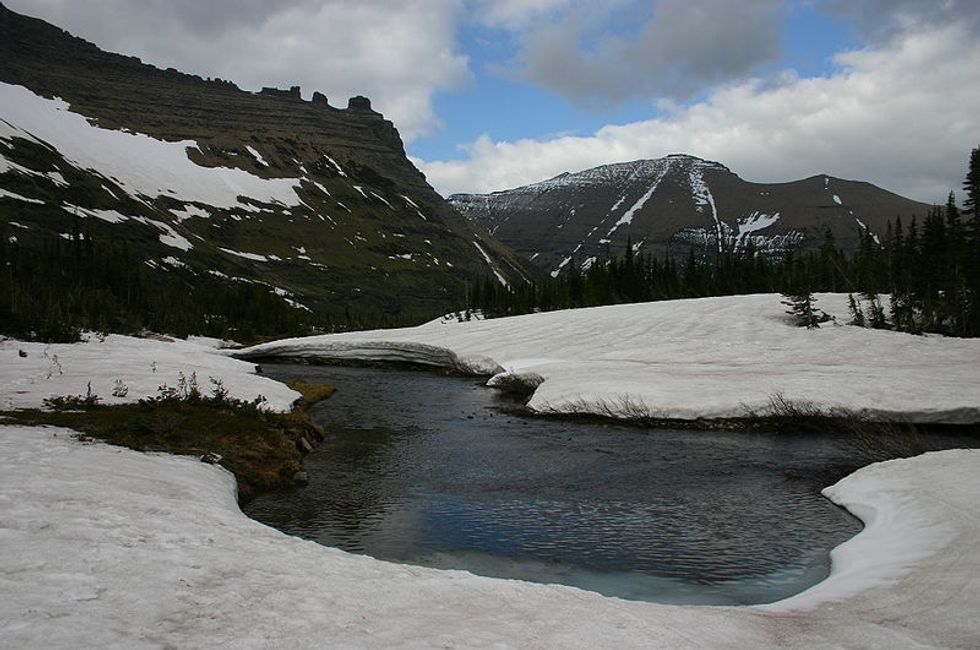 'You've seen one pile of snow, you've seen them all' -- Ronald Reagan

In an impressive deployment of strategic bafflegab, the Interior Department has the most excellent spin ever for its decision to refuse to let Facebook founder and CEO Mark Zuckerberg meet with top climate experts when he visited Glacier National Park in Montana last weekend: No meetings with people who could talk about climate change, like the park's superintendent and top research ecologist, because it wouldn't be fair to ordinary Americans if the park offered special treatment to some stupid nosy celebrity who'd just make noise about so-called "global warming." Just listen to the excellent job of press management done by Interior Department press secretary Heather Swift, in an email to the Washington Post:

“The park gets 3 million visitors a year, most of them coming in the summer months,” Swift wrote. “July is peak season. A number of Park rangers were made available for the celebrity’s personal tour but allocating such extensive government resources to a celebrity would have been a waste of money and a disservice to average parkgoers.”

Swift didn't quite explain why the needs of ordinary parkgoers would have not been met if the delegation that showed Zuckerberg around had included park superintendent Jeff Mow or U.S. Geological Survey research ecologist Daniel Fagre, who told the Post earlier this week that he'd been told not to meet with Zuckerberg. It's not like they're usually manning the ticket booth or picking up trash in the parking lots.

Instead, the Interior Department was out to limit too much factual information about this "climate change" nonsense getting into Zuckerberg's head, according to Interior Department insiders, who would be as interior as you can get. If the goal was economy, it seems maybe that didn't work so well, since Interior held

days of internal discussions — including conference calls and multiple emails — among top Interior Department and Park Service officials about how much the park should roll out the welcome mat for Zuckerberg[.]

Zuckerberg, after all, is one of several techie billionaires who have been very critical of Donald Trump's decision to trash the Paris climate agreement and the planet, so it simply wouldn't do to give Zuckerberg too warm a welcome at Glacier, lest he discover the administration's secret plan to defeat ices.

Swift made it abundantly clear that she didn't want Mow meeting with Zuckerberg, and that park staff were to say nothing about the visit on social media, because after all you don't want the enemy to get a publicity advantage:

[The] Park Service’s public affairs staff was instructed not to post anything about Zuckerberg’s visit on its Facebook or other social media accounts, including sharing a Facebook post he wrote during the visit in which he registered his alarm at the shrinking glaciers at the park, according to someone with knowledge of the directive.

“The fact that you would have been sharing Mark Zuckerberg’s views with 93 million followers is going to give it that much more lift,” said one Park Service employee who was not authorized to discuss the deliberations and requested anonymity.

Here's that Facebook post, which indicates someone on the tour nevertheless spilled the beans about climate change instead of going with the cover story that the glaciers are receding because they're shy:

Welcome to the Age of Trump: Meetings about celebrity visits to national parks are treated as if they involved military secrets. Haha, we are of course engaging in hyperbole -- if Zuckerberg's visit were really that big a secret, we'd have only learned about it when Donald Trump told the Russian foreign minister about it.

Glacier Park superintendent Mow, who has no qualms telling ordinary park visitors that the glaciers of Glacier Park are definitely disappearing due to a warming climate, seemed awfully diplomatic in an interview about being shut out of the tour for Zuckerberg; he said he wasn't involved in any of the planning, and learned he was disinvited when he got an email from other park officials who discussed who should be allowed near the dangerous internet man:

“The way I look at it is whenever you have a new administration, it takes a while for them to get settled,” Mow said. “It’s an issue of people learning their jobs. They’re going to make mistakes along the way.”

“It’s growing pains and learning just how far you are going to get into the day-to-day operational issues at a park,” he said.

Fagre said he was "puzzled" that he was removed from the group guiding Zuckerberg, and said that he hadn't been given a reason for the decision. He has published extensively on the connection between global warming and glaciers disappearing, which probably means he would have just wasted a lot of valuable Park Service money telling Zuckerberg about that research when he should be in his lab staying quiet and not rocking the boat.

Ever the purveyors of fake news, the Post seemed skeptical of Swift's claim that fiscal restraint was the primary motive for keeping Mow and Fagre away from Zuckerberg, noting that

it is common at national parks, particularly premier ones such as Glacier, for the superintendent to greet and give tours to prominent visitors, largely to help promote the Park Service and in some cases to develop relationships that could eventually lead to philanthropic donations. Forbes listed Zuckerberg’s net worth as $63.3 billion Thursday.

Mow said he meets regularly with visitors, from members of Congress to school groups.

“It’s very rare for us to say no to anybody if I’m available and it works for my schedule,” he said.

NRA Declares War On Washington Post, Because After All, Obama's Gone

In which we fact check an NRA rant. Yeah, we're just silly that way sometimes.

Shh! Don't give credence to the fake news, Superintendent! You're only encouraging the violent left! Next you'll have radical black-clad antifa activists all over, breaking the glaciers and burning them for kicks, and rampaging through the meadows beating up anyone in a MAGA hat. If that happens, the militias may have to come and restore order in the park, and also maybe do some oil drilling and coal mining.