Team Trump Thinks Grandma Millie Has Too Much Money. Luckily, They're Here To Help! 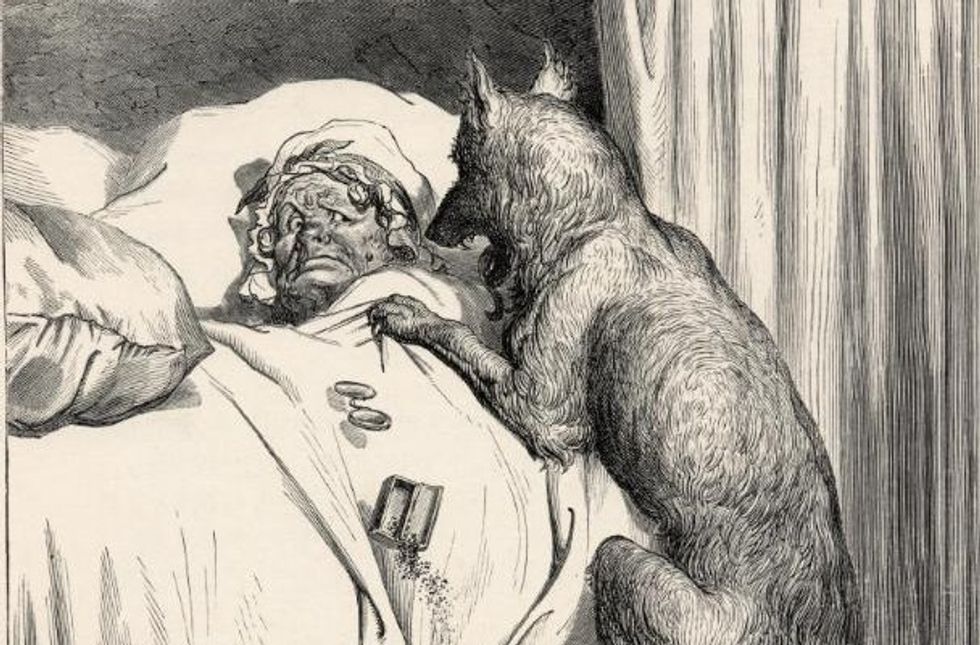 Yes, we know, wolves have gotten an unfair rep. Just imagine it's an HMO executive.

Just when we think we're cynical enough, when we're fairly sure we've heard every possible variation on plans the Republicans are hatching to transfer wealth from the middle and even from the bottom up to the richest Americans, along comes something that tops those horrors and makes us go lie down. You'd think we'd be used to it by now, huh? But consider us once again whomperjawed at the sheer greedy class warfare at work in a policy that's already been proposed in Congress by Tom Price, Donald Trump's nominee as Secretary of Health and Human Services: A change in how Medicare works that would allow hospitals and doctors to use predatory billing to bankrupt elderly patients.

In an article in The Week that's guaranteed to raise your blood pressure, Ryan Cooper explains how medical providers already gouge uninsured patients, and how it could get even worse if Price is confirmed as head of HHS. The profit opportunity is called "balance billing," and while it's currently not allowed for enrollees in Medicare, Price thinks it's a dandy idea, because it would allow free market forces to move money more efficiently from old folks to the Medical-Industrial Complex. Cooper gives us the short version of how "balance billing" currently works:

It's the practice of billing the patient for the difference between the sticker price and what insurance will pay. So if a hospital visit costs $1,000, but your insurance will only cover $300, some providers will "balance bill" you for $700.

For unscrupulous providers, the method of exploitation is obvious: When doing any sort of expensive procedure, take a rough estimate of the absolute maximum the patient can pay, and jack up the price so the balance hits it. Or if you're short on time, just bill them into the stratosphere, and you'll get whatever the patient has during the bankruptcy proceeding.

Cooper notes the practice is illegal for patients on Medicare, and "heavily restricted" for those on Medicaid. The Affordable Care Act was supposed to restrict it for everyone, but providers have found a brilliant way to work around that: the practice of balance billing for out-of-network care, which is allowed under both the ACA's exchange plans and employer-paid insurance. And with restrictive networks, you might find yourself getting surgery at an in-network hospital with an in-network surgeon, then getting an astronomical bill from the anesthesiologist, who happens to be out of network. Surprise! You're responsible for that bill, which may not even apply to your annual out-of-pocket limits. Pretty neat scam, huh? And it's perfectly legal! As Cooper points out, the practice is becoming increasingly common, and is one of the reasons the ACA hasn't eliminated bankruptcies due to medical costs -- they've been reduced considerably, but they still happen, thanks to balance billing for out-of-network providers and services. Oh, but just imagine if it could be expanded to get at a population that uses lots of medical care and tends to have more savings socked away than the average American population!

Permanently obliterating the financial security of helpless families with no or bad insurance as a loved one dies slowly and painfully of a chronic illness is a nice little profit center for providers. But it pales in comparison to the gravy train they might get if they can bring balance billing to Medicare. Seniors use far more care than the younger exchange population, and there are a lot more of them — 55.5 million, versus 12.7 million people on the exchanges. Perhaps most importantly, they're quite a bit richer on average. Many seniors have been scrimping their whole lives to save for retirement, in keeping with decades of agitprop from conservatives and Wall Street, and the more sociopathic among the health-care population are licking their chops at the prospect of being able to devour those nest eggs.

And here's where Tom Price comes into it: In 2011, Price introduced a bill that would have "reformed" Medicare, allowing balance billing along with transferring other costs to elderly patients, in the name of saving the program for future generations, don't you know. The American Medical Association was very supportive of the idea, because the dollar signs in their eyes reminded them of the sacred oath to First, do no harm to doctors' incomes. And while balance billing under Medicare wouldn't allow providers to arbitrarily jack up uncovered costs -- they'd have to set up fixed rates for services in their contracts -- Cooper states

those contract prices are guaranteed to be vastly higher than what Medicare pays now. It will be akin to seeing an out-of-network provider on private insurance now, something that causes thousands of bankruptcies today.

Even in that attenuated form balance billing would also go no small distance toward abolishing Medicare as an actual program of insurance. Medical debt-induced bankruptcies will become a routine occurrence for Medicare enrollees -- how can you be said to be insured if too much care might easily end up costing your entire net worth?

He's throwing out the baby and the bathwater. Hey, how did Grandma get in that tub too?

The result will be a whole lot more medical bankruptcies, but at least doctors will help the economy by boosting sales at Mercedes dealerships. If it's any comfort, Cooper notes that while the AMA is behind Price's nomination and the idea of balance billing for Medicare patients, even some of their member doctors oppose the practice, possibly because a fair number of doctors still go into medicine to help people, not to perform wallet biopsies. On the down side, there's also the larger context to consider: Not only are Republicans in Congress out to kill the ACA, they also want to replace Medicare with a privatized system where instead of having insurance through the government -- with lower overhead costs than private insurers -- the Republican wet dream is to give Medicare enrollees a fixed stipend to offset the cost of buying private insurance. Which can then bill them into the poorhouse.

Oh, yes, that will be the privately contracted poorhouse. Shares in those suckers oughta sell like crazy.