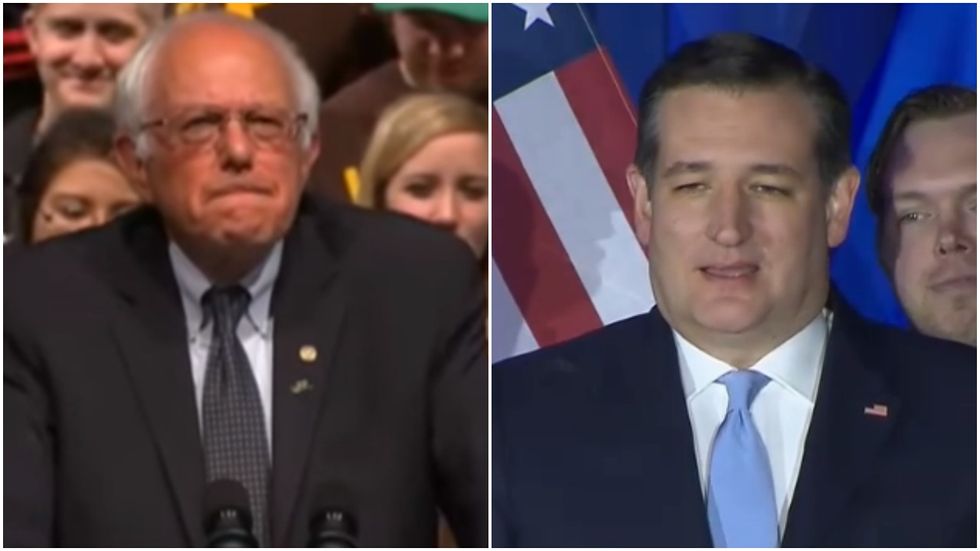 Those boys should smile more, don't you think?

Oh what a night it was in the way Up Nort' state of Wisconsin! It was a night that the punditocrats all said Ted Cruz and Bernie Sanders, currently both running second place in delegates in their contests, really needed to win for math reasons and momentum reasons and other reasons probably too. And they winned them, by handy margins!

On the GOP side, there is this whole thing about how Donald Trump's campaign seems sorta kinda like it's falling apart, or maybe it's just hitting a bump in the road. Trump has been turning off lady voters with his FIVE DIFFERENT POSITIONS on abortion, and also by being gross in the general direction of Ted Cruz's wife, Heidi, so much that even Trump's wife Melania -- never hardly ever seen during this campaign -- has been out there saying, "Hey honey, take your short vulgarian fingers off the retweet button!" But would Wisconsin voters be turned off by all the escandalo! rumors about Ted Cruz's Canadian penis crossing the border into lady-ginas he's not married to, and switch to Trump?

APPARENTLY NOT! Cruz beat Trump by 13 BADGERS, which is how they count "points" in Wisconsin.

For the Dems, it was harder to tell what was going to happen, as Bernie has had some MOMENTUM! lately. However, some of the polls showed him winning, while others showed Bernie neck and neck with Hillary, and oh my goodness so nailbiting! But Bernie winned! With his win in Wisconsin, by a margin of 14 BADGERS as of this writing, he has now won six of his last seven contests.

In fact, he said "momentum" a whole bunch of times in his Wisconsin victory speech, which was held in the Wisconsin suburb of Laramie, Wyoming:

Do you want to watch Ted Cruz get a booger on his lip and maybe boink a whore and be generally foreign-born and punchy and smug? Well, he didn't do the booger or the whore thing, but his Wisconsin victory speech featured a whole lot of him thinking this CHANGES EVERYTHING, blah blah blah, Ted Cruz never fucking shuts up when he (occasionally) wins. Here's his speech if you have nothing better to do in life.