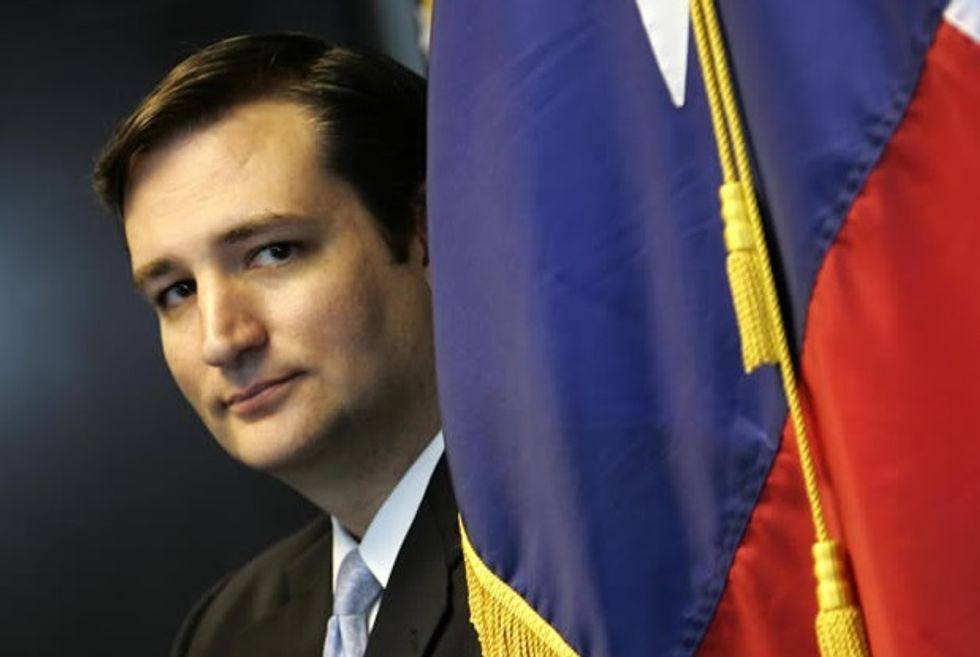 Oh Ted Cruz, you greasy-haired cock tease. Quit with the foreplay and just tell us if you’re running for president or not. We can’t take months and months of these sorts of tweeted hints. First we get this.

And then, literally two minutes later, this.

The linked fluff piece at National Journal – could there be a funnier irony than an article about Winnipeg Ted written by a guy named Tim Alberta? – has so many coy hints planted by an anonymous Cruz “adviser” that we are pretty sure the person was wearing sexy lingerie at the time.

According to sources close to the Texas senator, Cruz could be preparing for an end-of-year announcement and is now dedicating considerable time and effort to cultivating a foreign-policy foundation that might help his candidacy stand out in what is guaranteed to be a crowded field.

Alberta went on to interview Cruz in his office, where the Canadian anchor babby had this to say.

"I have been very clear that, in my view, the 2016 election is the most important election of our lifetimes," Cruz told National Journal in a lengthy interview in his Senate office. "Our nation teeters on the brink of a precipice. And I believe 2016 will be an election like 1980 about two fundamentally different visions for America."

It's no surprise that he wouldn't directly say whether a campaign is in the offing.

Of course not. That’s the job of those anonymous advisers, whom you can then directly contradict the next day by telling some other friendly reporter that 90/10 bit came from “an overzealous supporter out there making freelance comments.” Yeah, an overzealous supporter who was probably sitting in your office during the interview taking notes so he or she could call Tim Alberta and yell at him if the story was not to your liking.

Also it’s a heck of a coincidence that an interview where you strongly note the differences between your foreign policy ideas and those of your rival, Sen. Rand Paul, happens to get published the same day that this long New Yorker profile of Aqua Buddha hit the streets.

Not that we’re complaining! We are almost as excited for the possibility of a Cruz run as we are for another one from Duke Mittens Willingshire Romulus Handshake Croupier XII. Now if we could just get commitments from Governor Meatballs, Walker the Lazy Eyed, Yosemite Rick Perry and the Exorcist, we can finally rev up the 2016 GOP clown show.