Ted Cruz Did Not Put His Extramarital Penis On DC Madam Ladies, He SWEARS! 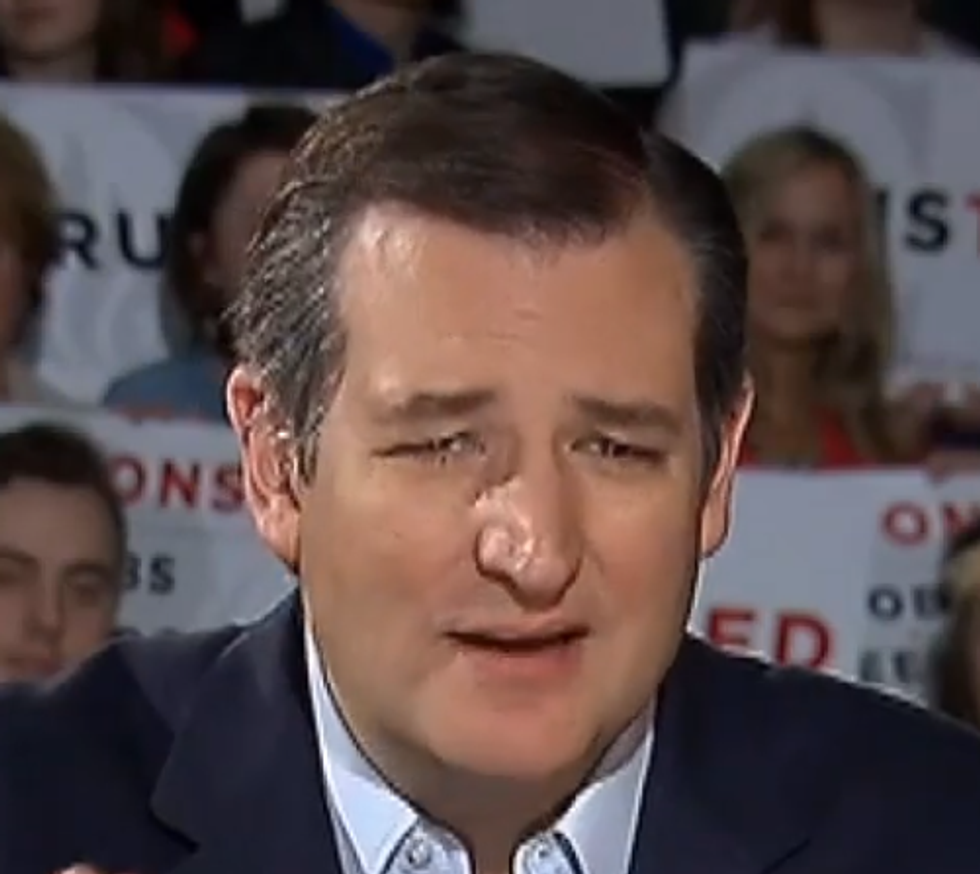 Oh Ted Cruz. You know, of all the people in the political universe we want to be imagining sex scandaling his dong into assorted ladies or gentlemen, Ted Cruz is not one of them. Ew yuck breakfast gone. BUT HERE WE ARE.

A few days back, the National Enquirerpublished a SEXPLOSIVE SEXGASM SEXSCOOP that Ted Cruz had been stickin' it to five different ladies, none of whom were named Mrs. Heidi Cruz. At the time, he called the report "garbage" and blamed it on Donald Trump.

.@MegynKelly: "Have you committed adultery in your marriage?"

KELLY: Have you committed adultery in your marriage?

At least that is a denial! He also says it's still Trump's fault that all this shit is being said:

It's completely made-up nonsense. It's simply not true. I have always been faithful to my wife. I love my wife. She's my best friend in the world. This is the kind of garbage the Trump campaign engages in. You know why? Because they can't debate substance.

Oh OK, he loves Heidi, they are BFFs, he's always been faithful to her, Trump is bad, nothing to see here, post over.

UNLESS we want to look at the UTTER GARBAGE AND COMPLETE LIES, according to Radar:

Montgomery Blair Sibley, a former lawyer for madam Deborah Palfrey, has filed a dramatic appeal to the U.S. Supreme Court for permission to publish her unconventional “black book,” which consists of some 15,000 pages of phone records and calls to clients, as well as their calls requesting the $300-an-hour services from her gaggle of beautiful hookers! [...]

Investigator Wayne Madsen, who was on a team of reporters hired by Hustler Magazine’s boisterous owner Larry Flynt to investigate the madam, told The ENQUIRER that Cruz should be concerned!

“If Montgomery Sibley has what he says he has, it has to be Cruz,” he said in an interview — an advance copy of which was provided to Radar.

“Going on what I know about the other male candidates still in the race, it isn’t any of them, and Palfrey didn’t provide call boys, so it wasn’t Hillary.”

UNLESS HILLARY IS A LESBIAN, MUST CREDIT WONKET.

So, as we see it, there are three options here: