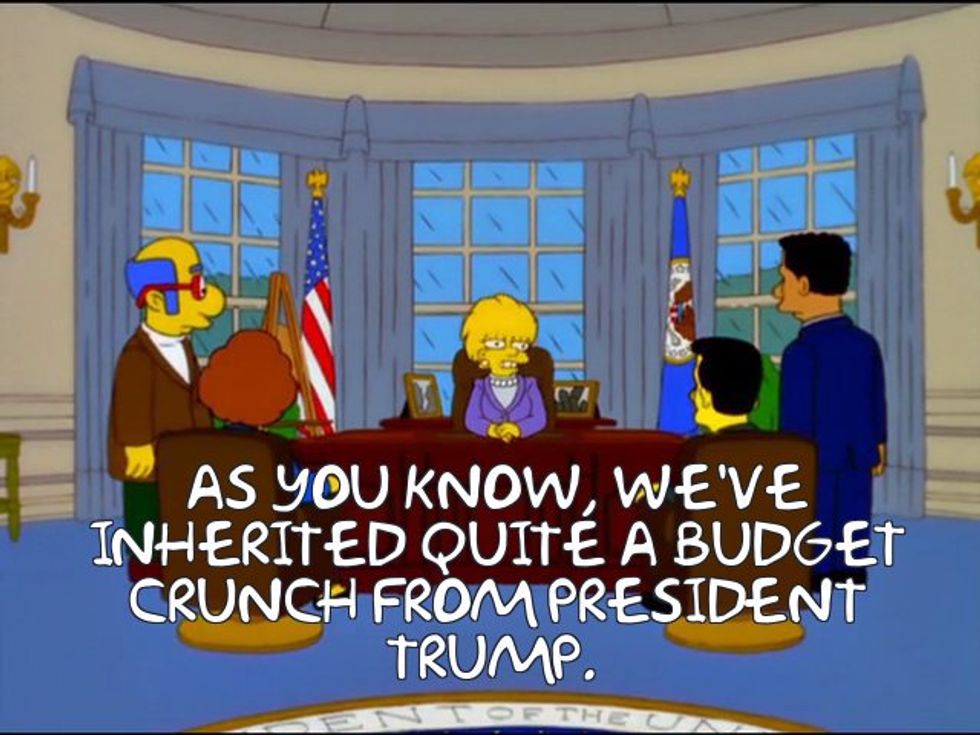 Guess we can see why Cruz wouldn't like Lisa

Ted Cruz isn't just a loathsome little toady who nobody likes. That's a given. No, what's worse is that he thinks he gets pop culture, and then proves just how very badly he doesn't, like that time a few years back when he went on and on about how much he loves "The Simpsons," earning the ire of Comic Book Guys everywhere by misquoting his "favorite" lines from the show. Cruz tried to pull off another really smart Simpsons riff again Thursday at CPAC, where he very predictably screwed the pooch:

I think the Democrats are the party of Lisa Simpson, and the Republicans are, happily, the party of Homer and Bart and Maggie and Marge.

Ted Cruz does have a unique ability to completely miss the point of virtually any work of pop culture, of course. This is the guy who read Green Eggs and Ham on the Senate floor to make clear just how much he objected to Obamacare. While he giggled over how America would not like Obamacare in a boat and would not like Obamacare with a goat, he missed the entire point of Theodore Geisel's little parable: Try something before you say you hate it. (It was a VERY SIMPLE POINT.) Ted Cruz would read Catch-22 and tell you it's the story of this guy in World War II who never understood anything about his patriotic duty.

So of course it makes sense that Ted Cruz thinks Lisa Simpson is someone to make fun of, while the rest of her family are just honest decent reg'lar American folks who love America and vote Republican. And of course he doesn't notice that in elevating Homer and Bart, what he's really saying is that Republicans are stupid, selfish jerks, and proud of it. Ted Cruz honestly thinks there's nothing more to Lisa than the smart kid, the activist, the overachiever, the sanctimonious liberal and feminist who sometimes thinks that because she's smart, she's better than everyone else (but also tries really hard not to). There's a simple reason Ted misses the bigger point, and it's not simply because he's a dumbass, though Jebus knows he's that.

It's really quite simple: Ted Cruz misses the point of "The Simpsons" because he's a sociopath.

Just another day at the Ayn Rand School for Tots

Science: Jerks Don't Understand Sarcasm, Explaining 95 Percent Of Our Letters To The Editor

A million years ago, we came across a study suggesting that empathy is vital to understanding sarcasm and irony. Being able to put yourself inside another person's cognitive frame is key to being able to see beyond the surface meaning of a sarcastic statement like, for instance, "Gee, Mr. Cruz, you sure are smart!" You have to identify multiple possible points of view before you can choose the right interpretation. No one is ever going to accuse Ted Cruz, or his ideological peers, of having an excess of empathy. In fact, they regularly mock the very idea of empathy, because it leads to weakness and spending on the poor, who need tough love.

And that's why Ted Cruz doesn't get Lisa Simpson, or the rest of her family, either. Lisa certainly is every bullied smart kid in the world, but "The Simpsons" isn't a show about why Lisa deserves to be bullied and defeated, for heaven's sake. Lisa is a wonderful kid, even though her parents don't always understand her and her brother has to urge her, at the movies, "If you don't watch the violence, you'll never get desensitized to it." When her elitist tendencies go too far, she usually pays for it, just as her family often gets in trouble when they ignore her. Lisa is smarter than her family, but still a vital part of it. She loves them and they love her; the whole point is that this fractious, dysfunctional family is only truly happy when they're all together (and sometimes at each other's throats). Like America, huh?

As for the rest of the family fitting in with the Republican agenda, again, that reading only works if, like Ted Cruz, you're an idiot who thinks Homer's stupidity, Marge's conformity, and Bart's dislike for learning and rules should be taken at face value. Homer may not understand Lisa's love of jazz, but he also sacrificed the money he'd saved up for an air conditioner to buy her that damn saxomaphone. Twice. Bart is a jerkwad, but he loves his sister -- he wouldn't dream of letting anyone else pick on her. And Marge? She might register Republican to get along with the church ladies, but then she'd vote for Hillary Clinton (and feel vaguely naughty for getting away with it). She wouldn't like Ted Cruz's manners, that's for sure. And she wouldn't appreciate his being so mean to her daughter, even though Lisa perplexes her sometimes.

If Ted Cruz and his wing of the Republican Party really belong anywhere in Springfield, it's in the office suite of Mr. Burns.

They're getting their message out, at least

It probably says more about Republicans than "The Simpsons" that a Ted Cruz would somehow think Homer and Bart are the faces of modern Republicanism. For much of the show's first decade or so -- when it was funniest -- its gleeful anti-authority gags generally gave rightwing types the vapors. Remember culture warriors complaining that "Bart Simpson: Underachiever (And Proud of It)" T-shirts were corrupting the youth? Decades later, tearing down institutions and being unrepentant assholes in the name of being politically incorrect are core Republican values.

But seeing "the Simpsons minus that liberal harpy Lisa" as Republican avatars misses the mark, too. It's as bad a misreading as when the real George H.W. Bush (not the cartoon version who later moved to Evergreen Terrace) proclaimed in 1992, "we need a nation closer to the Waltons than the Simpsons." (The show quickly edited the audio into a rerun, with the family watching TV and hearing the line, with Bart replying, "Hey, we're just like the Waltons. We're praying for an end to the Depression, too.")

As we said when he first expressed his unrequited love for "The Simpsons," a lot of pop culture is just hard for rightwingers. Somehow, they keep thinking they own pop-culture texts that explicitly reject them:

So much of it is filled with liberal bias, and yet they still keep glomming on to shows like "The Simpsons," which openly ridicules them, or "Star Trek," in which starship crews chosen by an affirmative action office zip around a post-nationalist, post-scarcity, socialist utopia spreading science and rationalism, never going to church on Sundays, and pretty much ignoring America’s Judeo-Christian heritage (the last line in TOS’s “Bread and Circuses” notwithstanding). Then again, conservatives also think lifelong socialist George Orwell wrote 1984 to warn against Obamacare.

They should probably just leave most popular culture alone -- at least the stuff that isn't directed by Michael Bay or Jerry Bruckheimer. They tend not to do well with it, the poor dears.

Yr Wonkette is supported by readers like you. Please click here to send us money! No Krustyburger coupons, please.