Ted Cruz Finally Manages To Be Kind Of A Mensch, For Once In His Awful Life 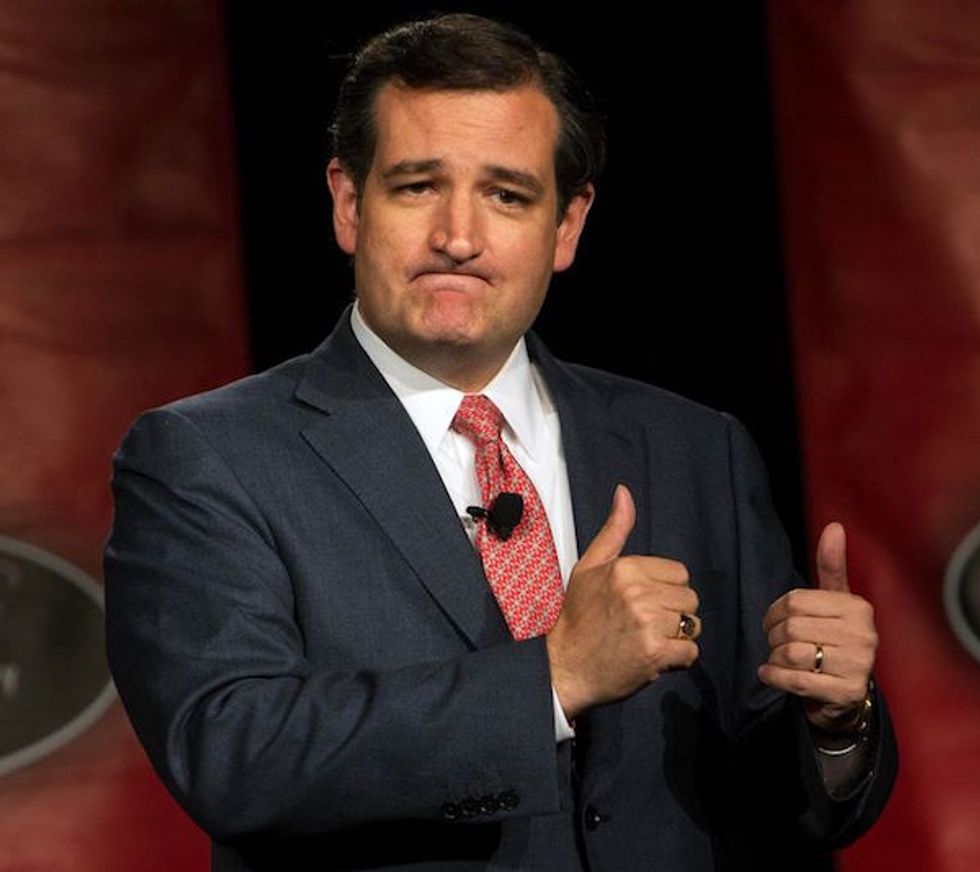 Ted Cruz is a bad person who is notoriously unlikeable and awful in almost every way it is humanly possible to be awful. However! Even a broken clock is right twice a day, and apparently, today was his time.

After abjectly refusing to endorse Donald Trump during his 22-minute long speech last night, Cruz spoke with RNC delegates this morning about what was going through his head when he did that.

I'm not gonna get into criticizing or attacking Donald Trump. But I’ll just give you this response: I am not in the habit of supporting people who attack my wife and attack my father. That pledge was not a blanket commitment that if you go and slander and attack Heidi, that I’m going to nonetheless come like a servile puppy dog and say, "Thank you very much for maligning my wife and maligning my father."

FUCK YES, good for you, Ted Cruz. I cannot believe I am typing this right now, but good for you.Someone comes for your family, that is an unforgivable thing.

You don't wanna be Fredo. Never be Fredo.

Someone in the audience then shouted "This is politics, you get over it!"

Again, good for you, Ted Cruz. Some things have to be more important than politics, and family has to be one of those things. It has to be. Certainly, the party of "family values" ought to understand that you don't just roll over on your wife and your father because it is politically convenient.

It's not easy to give props to people you loathe with every fiber of your being, especially if you happen to be petty as fuck, but I think sometimes you have to find the good in people or else you'll go crazy and hate everything. I will actually always give George W. Bush credit for apparently having been very good and kind to his mother, particularly as a kid. I give Bob Dole credit for having gone in front of all other Republicans to ask them to support the UN disabilities treaty, only to be scoffed at. I, unlike Donald Trump, give John McCain credit for having been through the horrible shit he went through as a prisoner of war. Some things you can't take away from people even if they are otherwise the worst. Standing up for the people you care about and having lines you won't cross? Being loyal to your family? That's a thing to be respected.

And today, Ted Cruz deserves a lot of credit for standing up for his wife and his father. I think he's awful, I think he's a weaselly, homophobic asswipe who in general is just not a good person at all, I think his father is probably even worse if that is even possible, but you know what? GOOD. FOR. HIM. That is a stand up thing to do. If he had gone along and been all sweetness and light and smiles to Donald Trump after the things he said? That would have been epically shitty. There have been way too many people, even on the Left, who have been willing to let Donald Trump say awful things about them and the people they love, and then turn around and smile at him (I see you, ladies of The View.).

I hate to say this, but if everyone followed Ted Cruz's example and stopped forgiving Donald Trump for being awful and acting like it doesn't matter, I'd be a lot less scared right now.