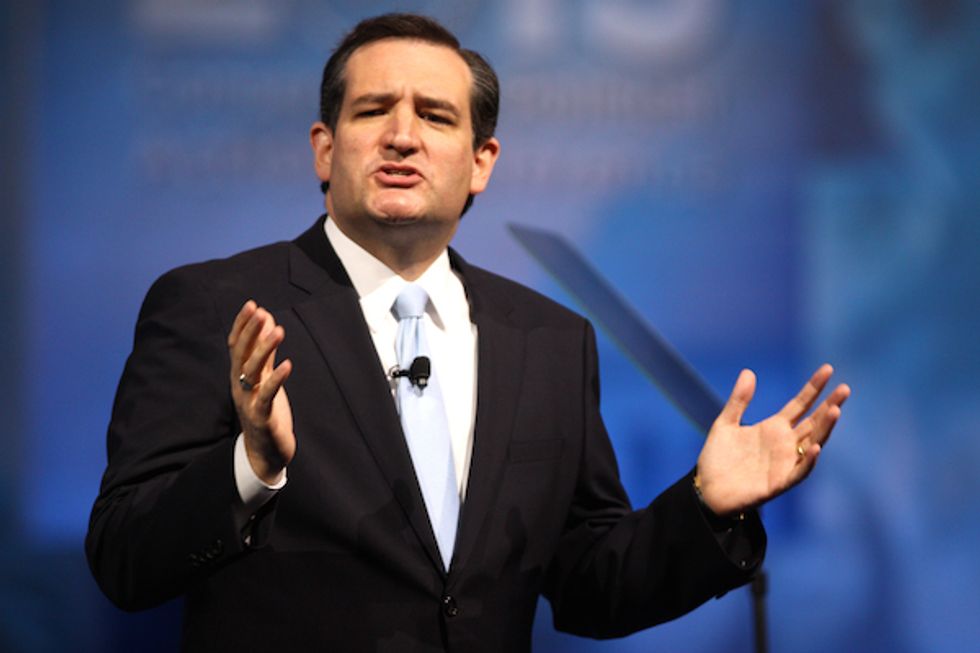 Wednesday night at a Washington gala dinner, Ted Cruz gave a keynote speech that ended with him getting booed off the stage. The reason? He made the mistake of praising Israel to a room full of Arabs. Whoops. Either someone on Edmonton Ted's staff fell down on doing the advance work, or Ted himself really does have the brain of an artichoke.

To be fair, these were Arab Christians, not the Arab Muslims Ted Cruz would have no problem slaughtering in bunches. The dinner was put on by a nonprofit called In Defense of Christians, a recently founded group concerned with the mass murders of its brethren being regularly committed by ISIS or ISIL or whatever the hell we’re supposed to call those maniacs. Except surprise! Arab Christians aren’t particularly fond of Israel either, for reasons obvious to anyone who has even a scintilla of knowledge about the history of the Middle East.

Ted, perhaps forgetting he was speaking to Arab Christians and not some church basement full of evangelicals in North Grundle, Texas, announced to the room that “Christians have no greater ally than Israel,” and when the grumbling and boos started, he went into a full-fledged condescending lecture about how anyone who hates Jews also hates Christians, before telling the crowd, "If you will not stand with Israel and the Jews, then I will not stand with you. Good night, and God bless.” And with that, he walked off the stage.

Being of the Jewish persuasion, we do appreciate Ted’s defending our right to exist. But we’re not down with insufferable douche noodles trying to reduce a complex and difficult situation into a “You’re either with us or against us” meme. Our last president did that, and it worked out rather poorly for everyone.

We’re looking forward to the insane ferrets at Fox News trying to puzzle out how to feel about this video after they just spent months justifying unflinching support for Israeli policies by screaming that Obama was ignoring the problem of Christians being mass murdered in Syria and Iraq by bloodthirsty Muslims. Heads will be a-sploding, we’re sure.

And here's a bonus clip from The Week in Cruz on Film. Check out this bit of hilarity on the Senate floor. Some background: Senate Democrats are pushing a constitutional amendment that would roll back the campaign finance excesses in Citizens United by declaring that Congress and the states can “regulate and set reasonable limits on the raising and spending of money by candidates and others to influence elections,” thus taking away the Roberts Court’s argument that money equals free speech.

Naturally, Republicans are trying to portray this as a root-and-branch repeal of the First Amendment. Which led to Edmonton Ted, who more and more looks to us like a macaroon with hair plugs, taking to the Senate floor to argue that the measure would allow the government to outlaw “Saturday Night Live” and toss Lorne Michaels in jail. We’re not sure what part of the senator’s base would actually have a problem with this, but reading the political leanings of a crowd doesn’t seem to have been Ted’s strong suit this week.