Ted Cruz Likes It When Cheese Dip Slimes Down His Nipples 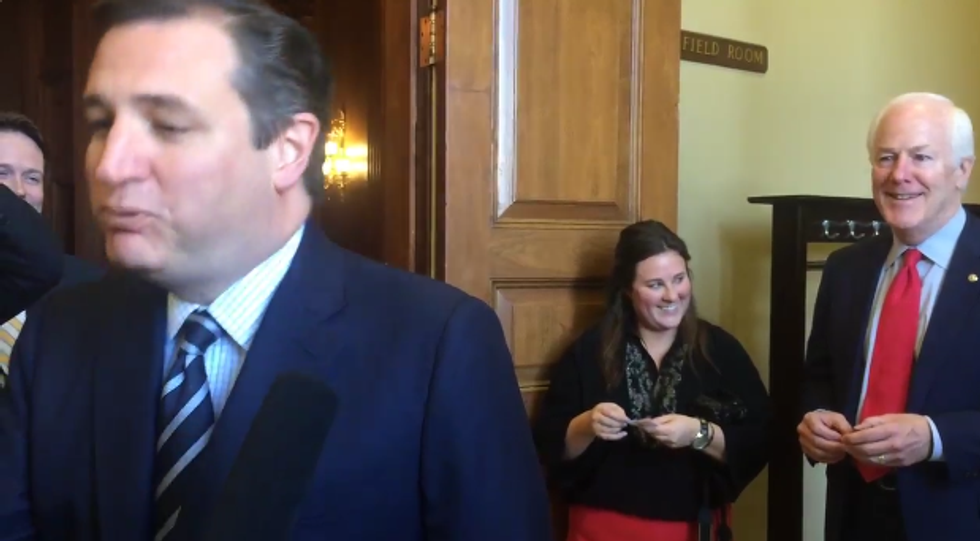 There's cheese dip in his pants too.

Ted Cruz is disgusting and creepy, and everybody hates him, and everything that comes out of his mouth sounds heinous and foul. He could read you the Preamble to the Constitution, followed by the Lord's Prayer, and you would need a shower afterward. He could read you one of Shakespeare's sexxxiest sonnets, and it would make you vomit up the poutine you had for lunch.

And so it is with this video from Dallas Morning News reporter Jordan Rudner, where Cruz is, for whatever reason, waxing poetic and slimy about how much he loves queso. It is very gross. (Ted Cruz is gross, we mean. Cheese dip is not gross. The best kind is Pancho's, which you can only get in the Memphis area, but you can order it on the internet.)

We already knew Ted Cruz had an illegal Canadian hard-on for Campbell's soup, millions and millions of cans of soup. But his love of authentic Texas queso is, shall we say, more visceral. We dare you to watch this video and then try to eat cheese dip without seeing Cruz's icky bad face in it.

Also? It comes off like a Bad Lip Reading video, because why would he even ...

Here you go, it is gross and terrible and you shouldn't watch it, because you will be scarred for life if you do:

.@tedcruz passionately defending cheese: "Queso is made to be scooped up with tortilla trips, dribbling down your chin and onto your shirt." pic.twitter.com/8j1u4ix5W0

It just tastes good! It speaks to the soul! Good queso relaxes you. Look. Cheese dip can be served on a Ritz cracker ...

... or with one of those tiny Vienna sausages.

GROSS! Now all we can see is Ted Cruz sitting in his underpants on the floor of his office with his meaty hand stuck inside a can of Vienna sausages, and also cheese dip slithering down his chin toward his nipples. Which is how he likes it:

Queso is made to be scooped up with tortilla chips, dribbling down your chin and onto your shirt.

And into his pants and onto Ted Cruz's Moral Majority, which is his name for his penis, allegedly. And now we must BRB and so must you, sorry about your lunch hahahahaha BYE.

Just kidding, he's still talking and you are still throwing up:

One is a visceral, emotional, powerful family bond, as you and your kids ...

... pour into nachos covered in queso. The other is party favors at an afternoon tea.

Either Ted Cruz had a stroke just then or we did while transcribing it, OK for real this time, POST OVER.