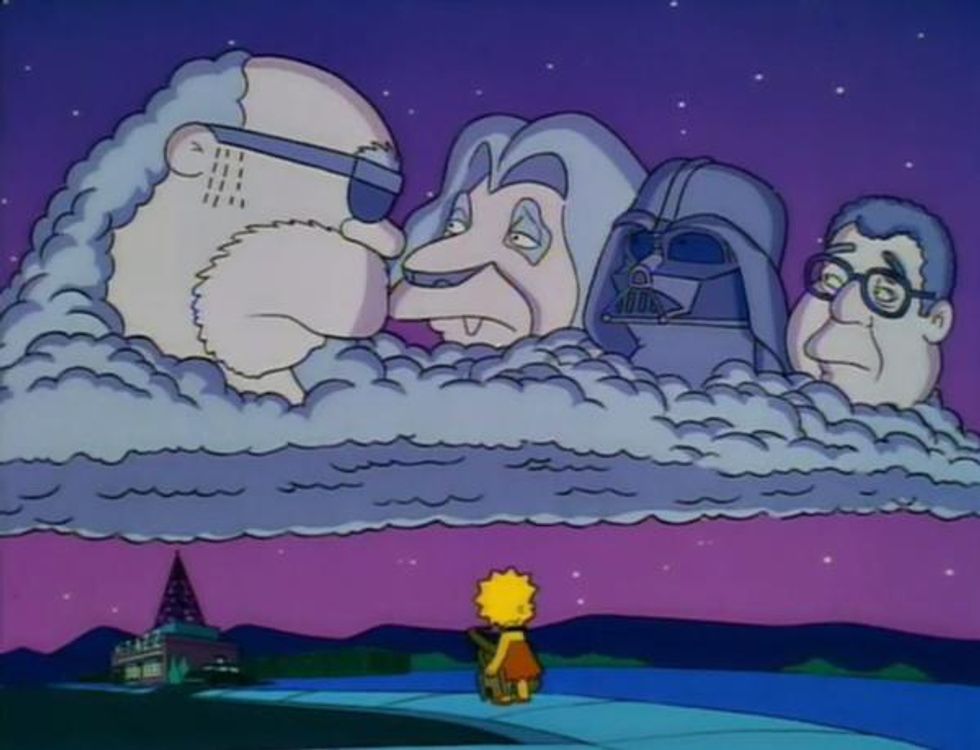 So it seems that Sen. Ted Cruz (R-Moose Jaw) fancies himself something of a Simpsons fan, as he told The Federalist's Ben Domenech in a recent podcast. He even did lines from his two favorite episodes, proving that he can relate not only to country music aficionados, but to rabid animation fans, also too!

His absolute favorite episode, he says, is "'Round Springfield," the episode where Lisa finally meets her jazz idol, saxophonist "Bleeding Gums" Murphy, but then he dies. And to prove just how much he loves the episode, Cruz does the famous bit where the spirit of Bleeding Gums appears to Lisa in the clouds, followed by Mufasa from the Lion King, Darth Vader, and James Earl Jones. We would show you the video, but no, most Simpsons clips do not stay on YouTube. And while Cruz doesn't do the absolute worst James Earl Jones voice we've ever heard, any Comic Book Guy would pedantically point out that Cruz muffs part of the line.

Sadly, the Federalist audio is also not embeddable, but Cruz calls the character "Mustafa," not Mufasa, and just has him saying "I am Mustafa," followed by Vader's "Luke. I am your Father" and Jones's "This is CNN." In the Simpsons episode, Mufasa says, "You must avenge my death, Kimba... dah, I mean Simba." It's a fairly nerdy inside-animation joke, and we suppose Cruz can be forgiven for flubbing it, but that totally proves that Ted Cruz is not one of us.

Cruz's other favorite episode is the segment in “Treehouse of Horror VII" where the drooling space aliens Kang and Kodos replace Bill Clinton and Bob Dole in the 1996 elections. Cruz happily performs his favorite line from that, too -- the speech where Bill Clinton says "we must move forward, not backward; upward, not forward; and always twirling, twirling, twirling towards freedom!" And as WaPo noticed, he once again botches it, though only slightly; Cruz says "twirling into the future" instead of "towards freedom."

Some fan YOU are, Mr. Cruz!

As the Daily Beast notes, Cruz's love of The Simpsons is also unrequited:

“To paraphrase Kang, 'Ted Cruz?' Go ahead, throw your vote away," Simpsons showrunner Al Jean told The Daily Beast, using one of the senator's favorite episodes against him.

Popular culture is hard for conservatives. So much of it is filled with liberal bias, and yet they still keep glomming on to shows like The Simpsons, which openly ridicules them, or Star Trek, in which starship crews chosen by an affirmative action office zip around a post-nationalist, post-scarcity, socialist utopia spreading science and rationalism, never going to church on Sundays, and pretty much ignoring America's Judeo-Christian heritage (the last line in TOS's "Bread and Circuses" notwithstanding). Then again, conservatives also think lifelong socialist George Orwell wrote 1984 to warn against Obamacare.

And don't even get us started on The Federalist's woefully boneheaded "analysis" of the Season 5 opener of My Little Pony: Friendship Is Magic, which columnist Brandon Morse somehow reads as a repudiation of Hollywood "leftism" and a "full-on direct strike against the so called 'equality' movement that emanates from today's academia-washed social-justice warriors[.]" The episode was a fairly simple fable about the pitfalls of conformity, but since the bad guys falsely conflate conformity with "equality," Morse decides that it's really an attack on "today's radical feminists, who preach equality while they practice dominance."

It's a pretty silly attack on a straw-pony version of liberalism -- lord knows we liberals spend our days trying to think of new ways to enforce social conformity -- and utterly ignores the explicitly feminist values that the show's creator Lauren Faust brought to the project. In Faust's view, this cartoon show about little pastel horses emphasizes that feminism is all about individualism:

There are lots of different ways to be a girl. You can be sweet and shy, or bold and physical. You can be silly and friendly, or reserved and studious. You can be strong and hard working, or artistic and beautiful. This show is wonderfully free of “token girl" syndrome, so there is no pressure to shove all the ideals of what we want our daughters to be into one package. There is a diversity of personalities, ambitions, talents, strengths and even flaws in our characters–it's not an army of cookie-cutter nice-girls or cookie-cutter beauty queens like you see in most shows for girls.

But like we said, don't even get us started on that.