Ted Cruz, Marco Rubio Now In Charge Of Murdering Science In The Senate 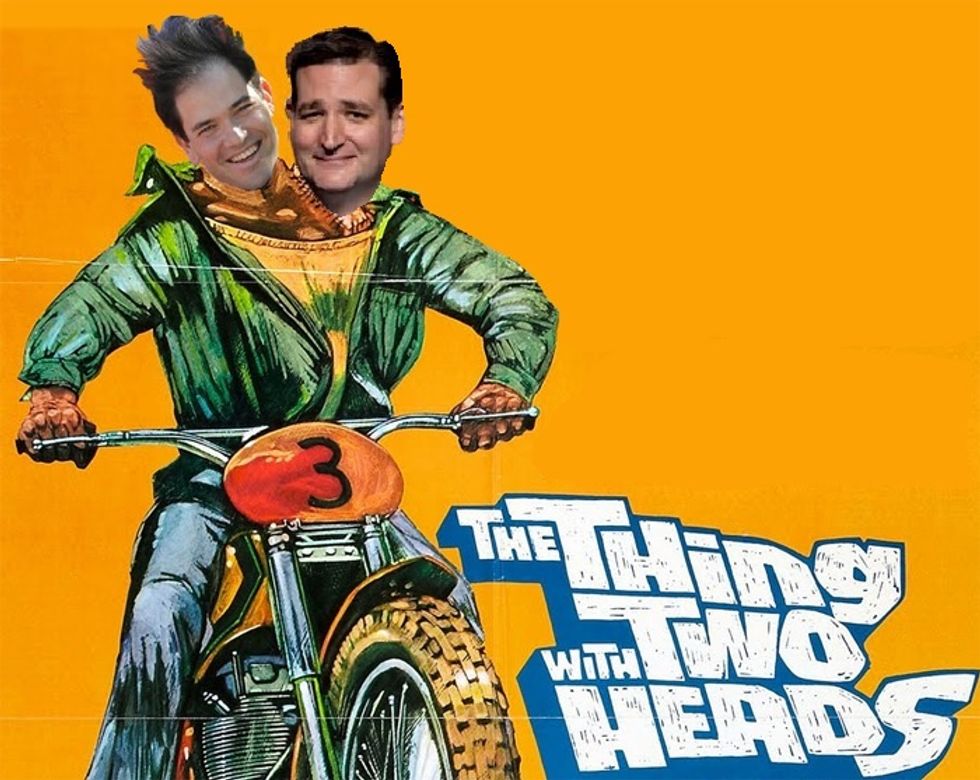 It's a great day to not believe in science, America! Sen. John Thune, chair of the Senate Commerce, Science and Transportation Committee, has picked the perfect heads for two science subcommittees: Ted Cruz, who doesn't like NASA doing science related to global warming, will head the Subcommittee on Space, Science and Competitiveness. And Marco Rubio, another climate denier and one of the first adopters of the "I'm not a scientist" meme, will chair the Subcommittee on Oceans, Atmosphere, Fisheries and Coast Guard, which of course has oversight of NOAA, the National Oceanic and Atmospheric Administration. Gentlemen, start your fox and henhouse clichés!

We have to say that the paired announcements must have meant an easy workday for HuffPo's Ashley Alman, who merely had to put together twinstories noting the appointment of an anti-science lackwit to a science committee, and then fill in the dumb stuff that each guy said about science. The real challenge had to be keeping their idiotic statements separate. Now, which one denies evolution, too? (It's Rubio.)

First, let's hit Cruz's crimes against science! He does at least talk as if he gave a millishit about NASA, although you'll notice that he only does so as a vehicle to suggest that Barack Obama is the one who's skewing science:

Stupid Obama, making NASA study something that everyone on the House Science Committee knows isn't real. Cruz also did no favors to NASA with the 2013 government shutdown, which hit NASA especially hard. Over 97 percent of its employees were furloughed, and the shutdown interrupted any number of projects. On the other hand, Cruz looked awfully brave and he stopped Obamacare, so there's that.

Cruz is pretty sure that global warming is just something that scientists made up to keep hardworking Americans from enjoying prosperity. In a CNN interview, he said he just plain doesn't believe the science and repeated the old climate denier canard that global temperature increases have halted:

The last 15 years, there has been no recorded warming. Contrary to all the theories that – that they are expounding, there should have been warming over the last 15 years. It hasn't happened.

Good one! Except of course, it's not really true. Maybe Cruz should be on the Agriculture Committee, though, since he's got a penchant for cherry-picking.

And then there's Marco Rubio, one of the pioneers of the tactic of dodging questions about science by saying "I'm not a scientist." In Rubio's case, it was a question about evolution that led him to proclaim that he was virtuously ignorant. Asked how old the Earth is, he replied:

I’m not a scientist, man. I can tell you what recorded history says, I can tell you what the Bible says, but I think that’s a dispute amongst theologians and I think it has nothing to do with the gross domestic product or economic growth of the United States. I think the age of the universe has zero to do with how our economy is going to grow. I’m not a scientist. I don’t think I’m qualified to answer a question like that. At the end of the day, I think there are multiple theories out there on how the universe was created and I think this is a country where people should have the opportunity to teach them all. I think parents should be able to teach their kids what their faith says, what science says. Whether the Earth was created in 7 days, or 7 actual eras, I’m not sure we’ll ever be able to answer that. It’s one of the great mysteries.

[contextly_sidebar id="wez8HJnt5IrR2rJabNyqxawLv8crIjZV"]Really, it's unknowable, and if it doesn't affect economic growth, does it even really matter? More recently, he bravely introduced a bill demanding travel restrictions from countries with Ebola outbreaks, even though actual scientists opposed the measure. After all, what do scientists even know, man?

And of course, his views on climate change continue to evolve, mostly toward not wanting to talk about it, but definitely toward being pretty sure it's not real. In 2011, he was quite certain that it was Unpossible:

In May 2014, Rubio repeated that he didn't really buy it:

I don’t agree with the notion that some are putting out there — including scientists — that somehow, there are actions we can take today that would actually have an impact on what’s happening in our climate. Our climate is always changing.

Including scientists! And then he followed that up with a seriously weird analogy to abortion, calling liberals hypocrites for saying there was scientific consensus on climate change, but denying that scientists also agree that life begins at conception, so put that in your Prius's tailpipe and smoke it, but you can't because it's electric, haha nerds! And now he gets to set policy for climate research.

In conclusion, the Senate is now going to be just as profoundly anti-science as the House, and while that's almost certain to be terrible for research budgets and for the environment, we can at least look forward to plenty of material for Wonkette. We'd advise folks in coastal areas to head for higher ground, though.