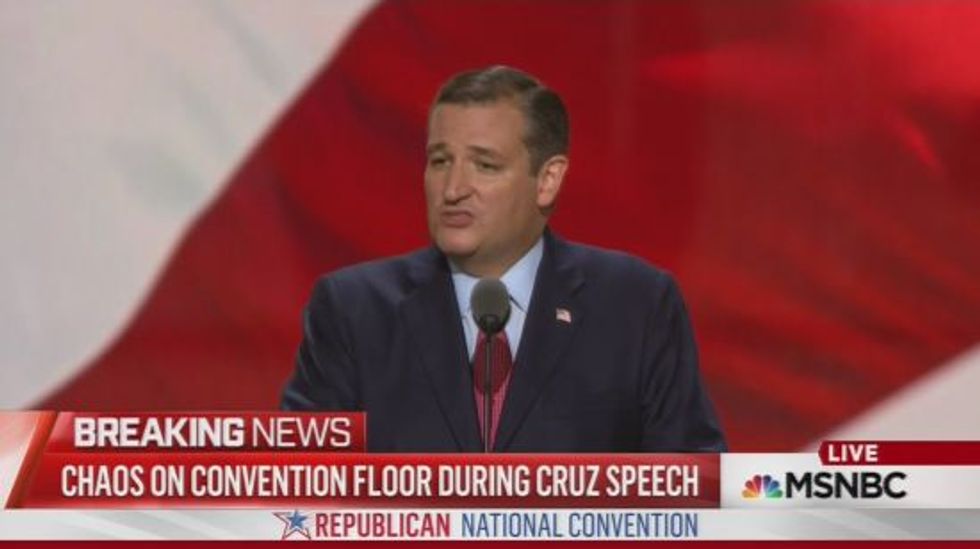 So THAT happened. Ted Cruz came out Wednesday night and gave the GOP convention a good old conservative fire-and-brimstone speech about freedom and stuff, and while it started off with a nice conciliatory gesture, congratulating Donald Trump for winning the nomination, nobody's going to be talking too much about what Cruz said in his speech. They'll be talking about what he didn't say, which was any hint of an endorsement of Trump. He was booed off the stage as he urged Republicans to "vote your conscience" -- not necessarily for the party's nominee. Way to go, Ted Cruz! And way to go, Donald Trump, for giving Ted Cruz a keynote speaking slot, never suspecting he would go up there and be Ted Cruz.

As the Atlantic notes, even Cruz's congratulations to Trump on the nomination was a barb: “I want to congratulate Donald Trump on winning the nomination last night,” pointedly calling attention to the last minute attempts to replace Trump with anyone else, except perhaps for Hillary Clinton. And the rest of the speech was full of lines that were as much jabs at Trump as they were good old Republican red meat, like "I want to see the principles our party believes prevail in November." Not necessarily the guy we ended up nominating.

As Cruz got closer to the end of his 21-minute speech (he'd initially been allotted twelve, then convention planners said he could have 20), and as it started becoming clear there was no endorsement coming, things got ugly, and nobody was shouting "Boo-urns."

"If you love our country and love your children as much as I know that you do, stand, and speak, and vote your conscience," Cruz said. "Vote for candidates up and down the ticket who you trust to defend our freedom and to be faithful to the Constitution."

At "vote your conscience," the audience instantly began to boo and shout.

"Go home! Go home to Texas!" a man shouted from the stands. "Lyin' Ted!" another yelled.

Never one to let anyone steal attention from him, that's when Donald Trump came into the Quicken Loans Arena. For balance, maybe.

As hundreds of delegates chanted “Vote for Trump!” and “Say it!” Mr. Cruz tried to dismiss the outburst as “enthusiasm of the New York delegation” — only to have Mr. Trump himself suddenly appear in the back of the convention hall. Virtually every head in the room seemed to turn from Mr. Cruz to Mr. Trump, who was stone-faced and clearly angry as he egged on delegates by pumping his fist.

And what a beautiful, patriotic, and completely Trump-free closing Cruz offered:

We must make the most of our moment – to fight for freedom, to protect our God-given rights, even of those with whom we don’t agree, so that when we are old and gray . . . and our work is done . . . and we give those we love one final kiss goodbye . . . we will be able to say, “Freedom matters, and I was part of something beautiful.”

Thank you. And may God bless the United States of America.

Would you believe it? The RNC was booing God!

The New York Times notes that as Cruz left the stage, "security personnel escorted his wife, Heidi, out of the hall." As she was being hustled out for her safety, one Trumper was kind enough to yell "Goldman Sachs!" at her, in case she'd forgotten where she works. People can be awfully nice that way.

Newt Gingrich, who came on next, tried to Luntz the hell out of Cruz's speech, and it was a pretty pathetic attempt at pretending Cruz had given Trump a big wet kiss:

Oh, and also, Mike Pence gave a speech accepting the vice-presidential nomination. Nobody seems to have noticed, because everyone's looking at the Republicans shitting on each other. In the most principled possible way. But as people are saying on the teevee, it could be that Cruz just brought the party together, in hating Ted Cruz.