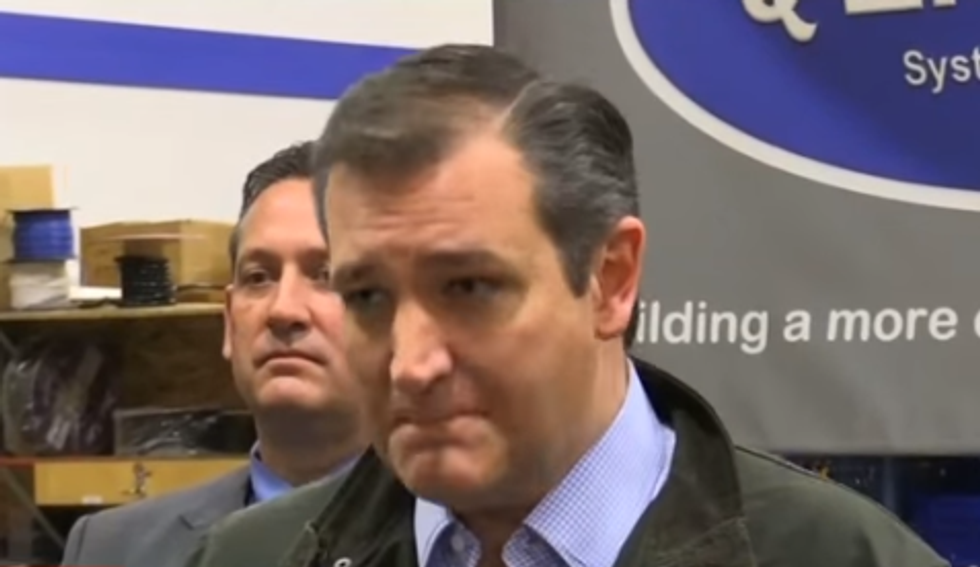 HE IS SCURRED OF MUSLIMS.

It's a day, so Ted Cruz is being a dick. Monday morning, he told a gay man at a town hall in New York how much he loves religious liberty, and how it applies to EVERYBODY, including Christians, Jews, atheists, and even Muslims. But apparently, in Cruz's mind, that liberty doesn't extend to the freedom to meet with one's senator.

What had happened was: Monday, the U.S. Council of Muslim Organizations (USCMO) hosted a to-do in Washington called the National Muslim Advocacy Day, for the second year in a row. Just like any other lobbying day, it was a thing where Muslims go to meet with their senators and their congresscritters and speak of their concerns. Totally normal! And according to the USCMO, they met with a third of the House and half the Senate.

But definitely not Ted Cruz:

Earlier today, 14 Texas Muslim delegates to the National Muslim Advocacy Day on Capitol Hill tried to meet with either Sen. Cruz or a member of his congressional staff, but were told no one would meet with them. The delegates had tried to arrange a meeting for several weeks prior to today's event.

Rude! It's probably because they were there to do Sharia law to everybody, right? That sure seems to be the belief of whackjob insane man Frank Gaffney, who as Right Wing Watch explains, is a "notorious anti-Muslim conspiracy theorist." He's also one of Teddy's foreign policy advisers. (For more on Frank Gaffney and what A Asshole he is, read Buzzfeed's excellent report on how Muslims used to love living in Tennessee, but now they don't, partialily because of people like Frank Gaffney.)

Let's read his very stupid column in The Hill about how Monday's event was ACTUALLY Muslim Brotherhood Appreciation Day:

The USCMO is the latest in a long series of front organizations associated with, and working to advance, the agenda of the Muslim Brotherhood in the United States.

Uh oh! You see, there is a memo, written by a Muslim Brotherhood dude, and it says exactly how groups like the USCMO are going to infiltrate America and turn it into the caliphate and kill America dead. This, according to Gaffney, is their plan:

[T]he memo describes in detail the Muslim Brotherhood's favored technique for accomplishing its stated goal of "destroying Western civilization" — at least until such time as they are strong enough to use violence decisively: "civilization jihad." This sort of jihad involves employing stealthy, subversive means like influence operations to penetrate and subvert our government and civil society institutions.[...]

With the launch of the U.S. Council of Muslim Organizations in March 2014, the Muslim Brotherhood has secured a new instrument for its subversion: a self-described U.S. "political party" meant to dominate and mobilize Muslim voters across the country and get them marching according to one plan. The object is to elicit support for the Muslim Brotherhood's demands from candidates and to help achieve what the Islamic supremacists would regard as favorable outcomes in the 2016 elections.

TRICKY TRICKY! And for real, if you read the USCMO's press release, you will see the thinly veiled jihad and falafel contained in their lobbying goals:

OK so you have to get rid of Islamophobia, so the Muslim Brotherhood can do its subversive "take over America" thing. The thing about credit card debt is important because even scary Muslims listen to Suze Orman. Fruits and vegetables for poor people? PFFFFT TERROR-DOERS GOTTA EAT. And they support Countering Violent Extremism because of taqiyyah, which is the Muslim thing where they're allowed to lie to infidels so they can jihad them! (N.B. That is what American wingnuts believe taqiyyah maeans. It is not what taqiyyah means.)

[wonkbar]<a href="http://wonkette.com/599898/ted-cruz-furious-with-syrian-refugee-babies-for-attacking-brussels-like-that"></a>[/wonkbar]Anyway, these are Ted Cruz's own Texan constituents who want to meet with him. You think he'd care, hahaha no you wouldn't. He and his boy Gaffney are a-scurred of the Islamics, boy howdy! All you need to see is Cruz's plan for patrolling Muslim neighborhoods and read all the gross things he has to say about Syrian refugee babies, to know that he is a fucking bigot who should never be president of his own punchable face, much less America.