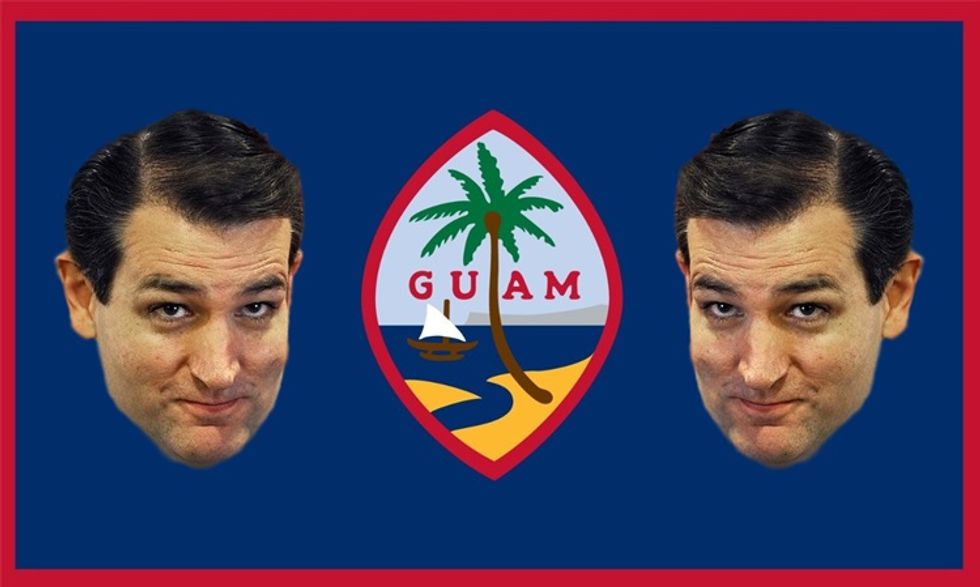 The road to the White House goes directly through Guam, said no one ever, but don't tell that to Canadian-Cuban-Dickfungus-American Ted Cruz:

The Cruz campaign has dispatched political consultant Dennis Lennox to Guam to organize in advance of that island’s GOP caucuses. The decision to send Lennox, a former county drain commissioner in his native Michigan, to Guam represents the most zealous outreach of any presidential campaign to the US island territory located nearly 8,000 miles from Washington DC.

Look, not to massively crap on our own little territory of Guam -- and, pardon us, but how is the United States owning territories even a thing still, in this, the year 2015? -- but when you are sending staff 8000 miles away to hook for the whopping nine delegates that Guam has to offer, your prospects are, to put it politely, effed. No one actually works for those Guam votes; in fact, most Republicans don't even bother to pick up a phone to call the place and be all, like, "Hey, I am LITERALLY phoning in my concern for you, vote for me maybe, if you want, not that I care much?"

David Sablan, a Republican National Committee member from Guam, said last week that Cruz had dispatched an operative to the island and said his was one of only three presidential campaigns that had reached out to Guam Republicans. The other two campaigns were those of former Florida governor Jeb Bush and Wisconsin governor Scott Walker. [...]

However, the Cruz campaign, which did not respond to a request for comment, was the only one to actually have a presence on the ground in Guam.

See? The Cruz campaign is probably feeling too dirty and ashamed of its desperation to even talk about it. How sad. And laughable. And laughably sad. Not that it is entirely Cruz's fault that he's so scared about his crappy poll numbers to actually buy someone a plane ticket to Guam, to pander to the Guamese. Guamarians? Guamanites? Whatever the fuck, those guys.

In 2012, the Republican National Committee made up some new rule about how Guam is a "state" for purposes of delegate-counting. And delegate-counting only. We wouldn't want to treat Guam like it is an actual part of these United States, with all the perks and benefits of statehood, and have to take care of all the military veterans we have stashed there. (Dead frickin' last in medical funding, per capita, by the Department of Veterans Affairs. Tie a yellow ribbon around that.)

Polling shows Cruz ain't doing too hot right now, though, so really, Cruz doesn't have much to lose by sending a staffer to the middle of the Pacific Ocean to say words about Jesus and Common Core and repealing Obamacare, all of which will no doubt resonate deeply with the American-ish people of Guam. Who knows? Maybe it'll even work, and he'll win the hearts and minds of all 165,000 or so residents of the territory, and then watch out, Donald Trump, Cruz will be heading right for ya.