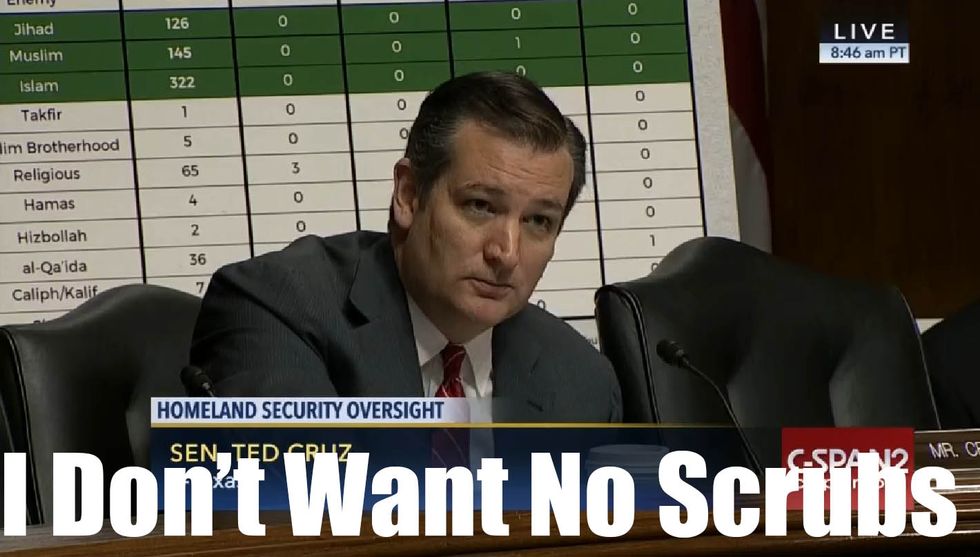 Get it? Ted Cruz doesn't like it when the DHS "scrubs" Muslim references out of documents! It's a joke about a TLC song!

Just when you think Ted Cruz has slithered off to whatever hole he fell into after Donald Trump ruined his lifelong dream of starting a fundamentalist presidential bigot movement, he creeps back and immediately tries to set your house on fire, like a crazy, spurned lover.

[wonkbar]<a href="http://wonkette.com/602958/obama-says-radical-islam-three-times-in-terrorism-speech-are-all-the-terrorists-dead-yet"></a>[/wonkbar]This week, the Senate Judiciary oversight committee interviewed retired Customs and Border Protection officer Phillip Haney, who testified that the Department Of Homeland Security had erased records containing Magic Words like "radical Islamic terrorism," "jihad," and "Muslim Brotherhood." Thursday, during a separate meeting of the Senate Judiciary oversight committee, Ted Cruz got all up in DHS Secretary Jeh Johnson's face about that: