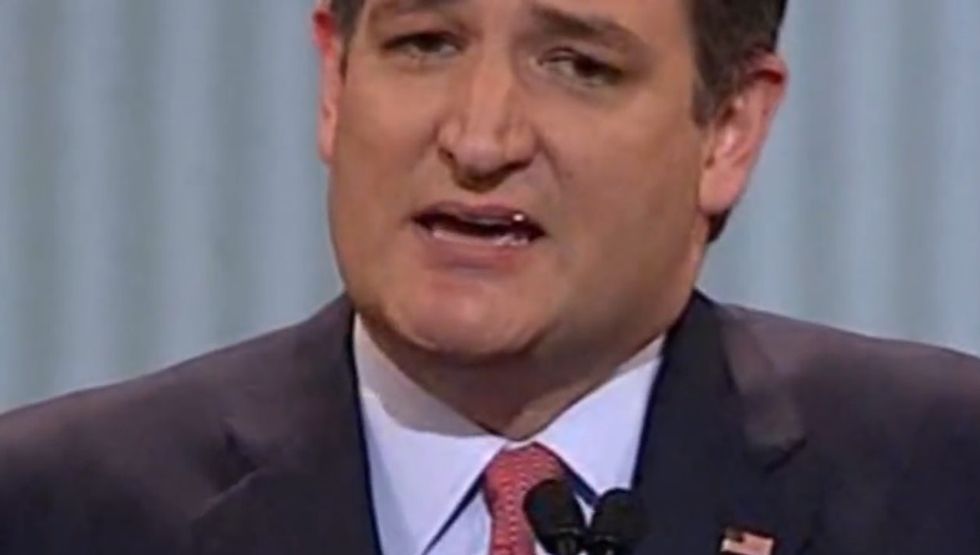 He still wants to be your lover.

[wonkbar]<a href="http://wonkette.com/588154/being-gods-chosen-presidential-candidate-giving-ted-cruz-nasty-case-of-stigmata"></a>[/wonkbar]But now he says he might be willing to unzip his suspended campaign and jump back in the ring, but IF AND ONLY IF the corn-husking Republicans of Nebraska beg him nicely, with votes. This all went down on the Glenn Beck radio program:

CO-HOST PAT GRAY: If Nebraska were to somehow ...

GRAY: ... if that happened, would you consider getting back in the race?

FOREIGN-BORN ASSWIPE WITH PUNCHABLE FACE: I am not holding my breath. My assumption is that that will not happen. But listen, let's be very clear, if there is a path to victory, we launched this campaign intending to win; the reason we suspended the race last week is with Indiana's loss, I didn't see a viable path to victory. If that changes, we will certainly respond accordingly.

NEBRASKA WINGNUTS, YOU SIT THE FUCK BACK DOWN AND EAT YOUR REUBEN SANDWICHES, which you eat for every meal, because Nebraska is where Reuben sandwiches started!

Of course, Glenn Beck and his idiot pals were all "YAY, Nebraska, go vote for Cruz!" But it wouldn't even matter. Cruz is mathematically eliminated from contention for the Republican nomination, and Nebraska, where 95% of the voters are cows (this statistic may or may not be true) is not going to change that. Ted Cruz ain't gonna come back and save you now, GOP babydolls. You are the party of Trump, and you have to live with that.

And look, we know, with all these dickhead politicians "suspending" their campaigns these days, but never actually ENDING them (so they can keep raising $$$), there's always a teeny chance for somebody to come back all deus ex machina-style and change the course of an entire campaign.

But that is not going to happen here. Ted Cruz didn't "suspend" his campaign for "noble reasons" like that dumbfuck John McCain in 2008, promising to return as soon as he was done fixing America. Cruz fucking quit, because he is a loser.

Besides, didn't that rat bastard just say Monday night he has no intention of challenging Donald Trump's ascension to the great Republican wingnut throne? Yes, he did.

[wonkbar]<a href="http://wonkette.com/600658/we-are-starting-to-for-real-worry-about-ted-cruzs-wifes-well-being"></a>[/wonkbar]Cruz's soup-returning wife Heidi told the campaign's National Prayer Team on a conference call Tuesday that Jesus has much bigger plans for them than this piddly-ass 2016 election, and sometimes it takes longer than you'd expect for God to make Ted Cruz president. Remember how long it took God to abolish slavery? NO FOR REAL SHE MADE THAT COMPARISON, and we are even more worried for her mental health than we were before:

“I don’t want you to feel like any of this was in vain," Heidi Cruz said. "I believe in the power of prayer. This doesn’t always happen on the timing of man, and God does not work in four-year segments."

"Be full of faith and so full of joy that this team was chosen to fight a long battle," she continued. "Think that slavery — it took 25 years to defeat slavery. That is a lot longer than four years."

Girl! GIRL. GIRL! Listen to yr Wonkette, Heidi. We care about you. It is time for you to go to the beach and kick your feet up and drink about a thousand gallons of bloody marys and read yourself some Eat, Pray, Love or 50 Shades Of Butt Stuff or whatever the ladies are reading this summer, and forget about him!

[wonkbar]<a href="http://wonkette.com/600012/is-ted-cruz-adulterous-foreign-born-whore-maybe"></a>[/wonkbar]OK fine, you don't have to divorce him if you don't want to (UNLESS HE REALLY DID BONE ALL THOSE LADIES, IN WHICH CASE GET OUT), but you two bag o' dicks ain't never gonna live in the White House, because God didn't choose him for SHIT.

Give it up, Heidi. For your own sanity, and for America, even if that isn't your husband's native homeland.

[Right Wing Watch / The Texas Tribune via The Hill]