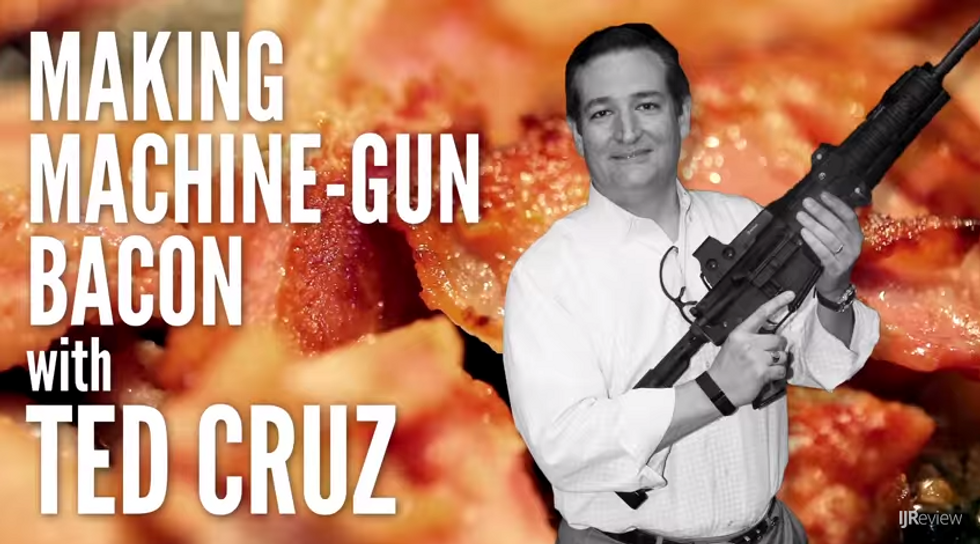 "In Texas," says Canadian-born Cuban Ted Cruz, "we cook bacon a little differently than most folks." How's that, you're not even wondering, but he's gonna show you anyway. See, while other Americans might cook bacon the lazy way -- on the stovetop or in the oven or maybe even the microwave -- Texas-Americans drive to their favorite local gun range, wrap strips of bacon around the barrel of a machine gun, POW! POW! POW! at a target until the bacon grease collects in a pool on the ground, and voila! It's both an efficient and hygienic way of enjoying the cornerstone of any healthy breakfast.

Oh, come ON, you are undoubtedly thinking to yourself. This is not really a thing, is it? But yes, it really is:

In Texas, a competitive shooter has created a video demonstrating that you can cook bacon on your M16 assault rifle by firing off 90 rounds and letting the weapon's heat do its thing. This seems to us to be both a supremely inefficient (and noisy) cooking method, not to mention a colossal waste of ammo, but on the plus side, we all now know a) that gun barrels get really hot; and b) why foreigners find the U.S. peculiar. Well done, sir.

Cruz's manly man bacon funtimes video is the latest contribution to a growing collection of Republicans doing violence to inanimate objects in an attempt to persuade voters that they are qualified to be president of the United States of Kicking Your Ass. There was Lindsey Graham, destroying his cell phone, but in a classy way, with classical music and shit. And Rand Paul destroying the U.S. tax code with a chainsaw. And Rick Perry challenging Donald Trump to a pull-ups off, which isn't violent, per se, but is still the equivalent of asking voters to admire his giant manly Republican jizz wand. There's also Chris Christie's video in which he threatens to punch teachers' unions in the face, but that's not some professionally produced attempt to go viral and show the candidate's sense of humor; that's just Christie talking the way he does, like any other day. And we all know Donald Trump is the ass-kickingest candidate of all, as he has declared on the Twitters.

We hope this trend of Republicans demonstrating their ass-kicking techniques continues. Come on, Carly Fiorina, show us how you will stomp on ISIS, backwards and in heels. How about you, Dr. Ben Carson? Take a scalpel to your enemies' nuts, maybe? No one wants to hear your boring words about policy; leave that to the wussy Democrats. You're trying to win the hearts and minds of the Republican base, after all, and prove quien es mas macho, so fuck it or kill it and wrap it in bacon. That's how they roll.