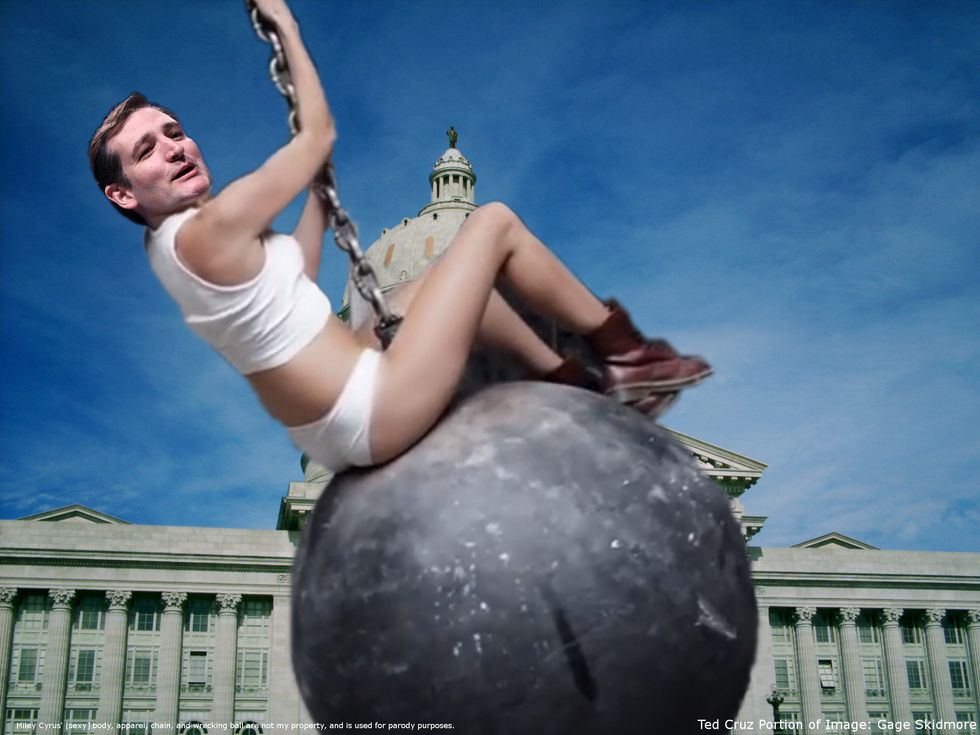 This is what Ted Cruz looks like when he begs for money.

[contextly_sidebar id="yiOWqzxWZAPOitn0INGK4PabVzEWrD21"]Uh oh, Ted Cruz is doing dirty tricks again! (No, he's not still saying Ben Carson died in an Iowa cornfield or whatever. He apologized for that at Saturday's debate.) Now the Cruz campaign is sending some yucky gross mailers to folks! (No, not like the mailers from Iowa, these are DIFFERENT.) Know that thing when it's 1995 and your grandma gets an envelope from Publishers Clearing House and she gets so excited because she thinks she won, but it turns out it's just another dumb advertisement? This is like that, only suckier:

A New Jersey resident sent The Huffington Post the latest piece of mail he received from Cruz's campaign. The envelope appears to have come from Cruz's Senate office and has his name printed the same way it often is for Senate business. In small type the mailer clarifies that it is for "personal" matters and was not sent at taxpayers' expense. It also promises a check.

[contextly_sidebar id="7JZ7yVei2csVMbyAf3L0NbcmxDqSHGzV"]How nice! And Ted Cruz's wife is a rich lady who probably still has a bunch of Goldman Sachs whore diamonds lying around, and Ted Cruz has been doing fiscal conservatism for years by NOT TITHING TO JESUS, so it's plausible that he might send you some money for no reason, right?

Here, have a picture of an envelope:

And there is a check inside! Trouble is, according to the Huffington Post, it is not a real check, and it's made out to the Cruz campaign, not your grandma.

The New Jersey voter who received the mailer and asked not to be named said the letter would be enough to "fool my mother-in-law."

Because that voter's mother-in-law is a fucking idiot, we guess. Then again, that is the target demographic for the Republican primary.

[contextly_sidebar id="QEvCJQEvVotQju75smN3xEc1frJ6ZWWL"]So what you actually find out after you look at your fake check and realize Ted Cruz is just pulling a "made you look, asshole!" sort of move is that if you give some dollars to the Cruz campaign, some whore fat cats (maybe those gay New Yorkers who love him so much) are going to match your donation and blah blah blah, we're sure it's a real interesting mailer, if you have no life.

The mailers are going to people in a whole bunch of the U.S. American states, and the Cruz campaign says they are totally normal:

Catherine Frazier, a spokeswoman for the Cruz campaign, said the mailer "clearly indicates that the contribution is going to the Cruz for President campaign" and noted that "match-type fundraising mailers are common to both campaign and non-profit solicitations."

Why yes, they are, idiot Ted Cruz spokes-troll. It's just that the matchy-matchy fundraising mailers WE get (which are all about killing babies with gay marriage and socialism) actually just say, "Hey, if you give us this many dollars, somebody will match your dollars, which will mean we can do TWICE AS MANY gay liberal sins as usual." They don't entice us by saying, "OOH FREE MONEY INSIDE!"

But then again, we are liberals, as opposed to GOP primary voters, so the people hitting us up for cash tend to assume our IQs have three digits in them. Guess it's a whole different ballgame when you're an immigrant running to be Republican president of America.