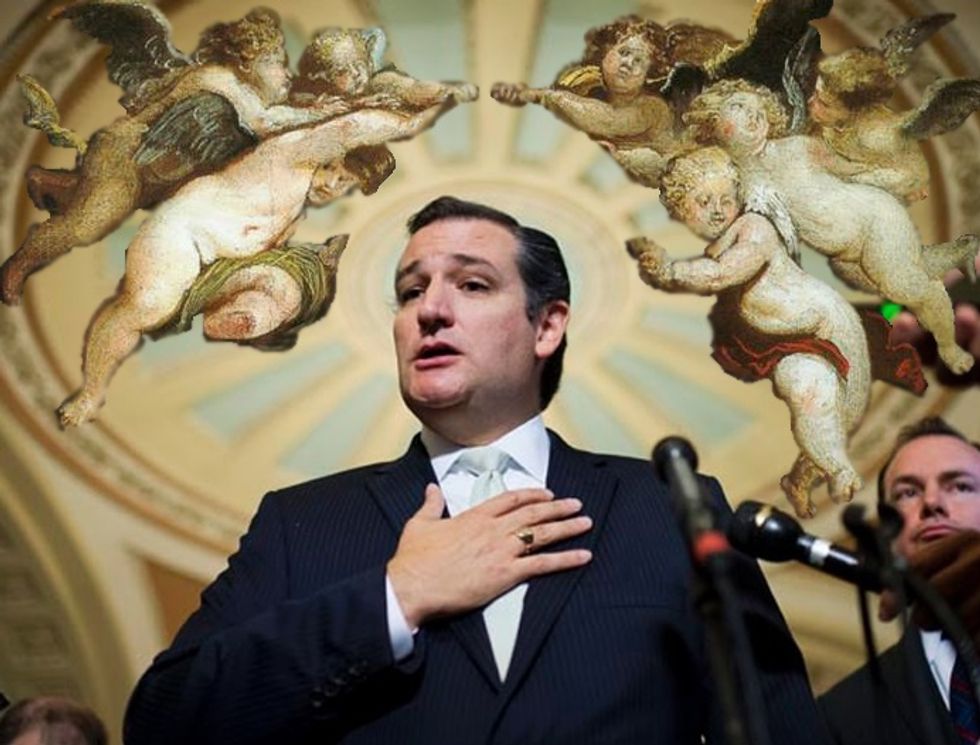 Thy rod and thy staff, they comfort Heidi.

[contextly_sidebar id="ic1AsXDdBZPzCS7CKYId7LhHBrYHPPNl"]Ted Cruz has one of the creepiest faces of any human ever to anchor baby hisself into America. It's that special combination of how he doesn't know how to genuinely smile -- he constantly sports the expression of a person who KNOWS he's smarter than everybody else, but obviously is an idiot -- and also he is just a total dick with a punchable face, and everybody hates him.

But to Heidi Cruz, who apparently had never laid eyes on a human man before seeing her husband, Ted Cruz is a heavenly cock-stallion, who bears the face of God Almighty Himself, and probably the penis of at least several Cuban-Canadian angels. She knows that when God said in Genesis 1:27 that He created man in His own image, He was talking quite literally about HER MAN.

Seriously, she told all this to some wingnut radio host called Vince Coakley:

If I were not married to Ted, this would be a campaign I would be trying to get on ...

YEAH WE BET YOU'D BE TRYNA "GET ON IT," HEIDI. Just kidding, we are being gross, here is more of what she said:

When I thought about doing it for our country, it became very clear to me that our family must be in this race. And it also became clear to me that we are at a cultural crossroads in our country and if we can be in this race to show this country the face of the God that we serve — this Christian God that we serve is the foundation of our country, our country was built on Judeo-Christian values, we are a nation of freedom of religion, but the God of Christianity is the God of freedom, of individual liberty, of choice and of consequence.

No offense, Heidi-ho, but if your husband's face resembles God, then God needs to put a bag up top His head before He meets anybody at the pearly gates, nah mean?

My beloved is radiant and ruddy, distinguished among ten thousand. (Song of Solomon 5:10)

His head is the finest gold; his locks are wavy, black as a raven. (Song of Solomon 5:11)

His eyes are like doves beside streams of water, bathed in milk, sitting beside a full pool. (Song of Solomon 5:12)

His cheeks are like beds of spices, mounds of sweet-smelling herbs. His lips are lilies, dripping liquid myrrh. (Song of Solomon 5:13)

His arms are rods of gold, set with jewels. His body is polished ivory, bedecked with sapphires. His legs are alabaster columns, set on bases of gold. His appearance is like Lebanon, choice as the cedars. (Song of Solomon 5:14-15)

You all want Ted Cruz's godlike face and "D" right now, just admit how jealous you are of Heidi. Can you even TAKE more Bible verses and Ted faces?

His mouth is most sweet, and he is altogether desirable. (Song of Solomon 5:16)

Is that enough? OK one more, and it's the Bible verse Heidi (probably) uses as a holy euphemism for what happens when Ted does starbursts in her:

I went down to the nut orchard to look at the blossoms of the valley ... (Song of Solomon 6:11)

Oops sorry, we just saw the "face of God" and we have to send Wonkette off to be professionally cleaned, BYE NOW.