Ted Nugent All Racist About Ferguson, Nation Back To Normal 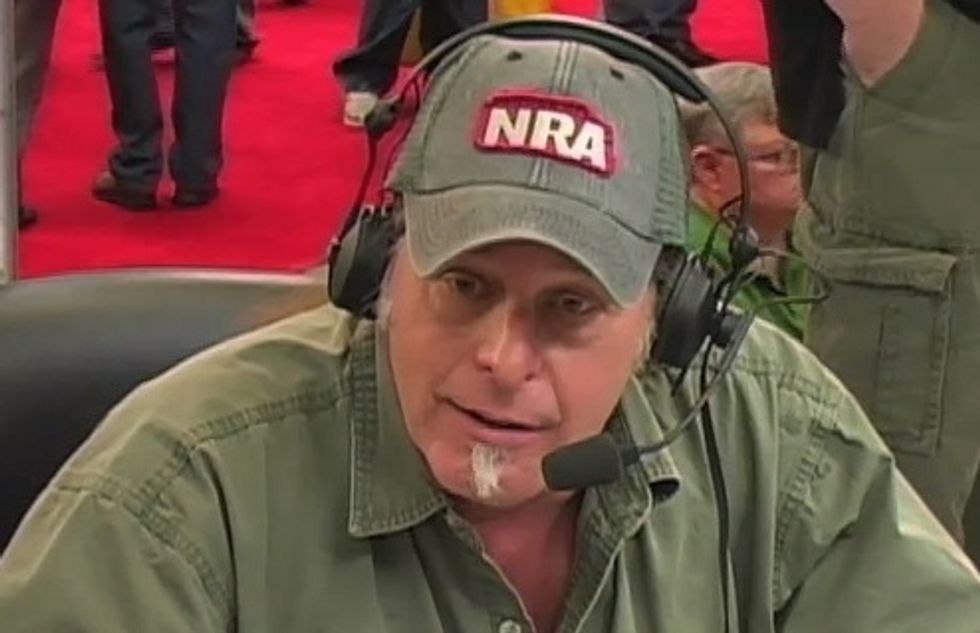 Guys, we are trying so hard not to be All Ferguson All the Time, but then, dammit, along comes Ted Nugent and posts this idiocy to his Faceplace:

Here's the lessons from Ferguson America- Don't let your kids growup to be thugs who think they can steal, assault & attack cops as a way of life & badge of black (dis)honor. Don't preach your racist bullshit "no justice no peace" as blabbered by Obama's racist Czar Al Not So Sharpton & their black klansmen.

Say, did we mention that this man is on the board of directors of the National Rifle Association, and they wouldn't dream of asking him to leave? The strongest thing the organization has ever said about the guy is "Ted is seen as Ted more than as an NRA board member." Hey, he's a rock star, he says wacky things is all.

Nugent continued with this sage advice:

When a cop tells you to get out of the middle of the street, obey him & don't attack him as brainwashed by the gangsta assholes you hang with & look up to. It's that simple unless you have no brains, no soul, no sense of decency whatsoever.

And if anyone knows about having a sense of decency, it's Ted Nugent! We suppose it would be a biased, ad hominem slur to note that this avatar of decency really, really likes underage girls. That just doesn't have any bearing on his advice to young men about how they should stay out of trouble, and we recognize that it's completely unfair to mention. Apples and oranges, really. Sweet, young, nubile apples. But the point is, because Michael Brown was a bad guy who walked in the middle of the street, sassed back, and assaulted a cop with his mutant bullet-dodging powers, there is no police brutality, so shut up.

Nugent is ready for his big finish, where he uses math to expose the hypocrisy of All The Blacks:

And dont claim that "black lives matter" when you ignore the millions you abort & slaughter each & every day by other blacks. Those of us with a soul do indeed believe black lives matter, as all lives matter. So quit killin each other you fuckin idiots. Drive safely.

Millions a day! Sure, just a single million a day would actually depopulate black America in about a month and a half, but the point is, until You People stop having abortions and make crime go away, really, you should just shut up. Oh, sure, white people also have abortions and kill each other, but that's different. It just is. And remember, Ted loves and cherishes all people.