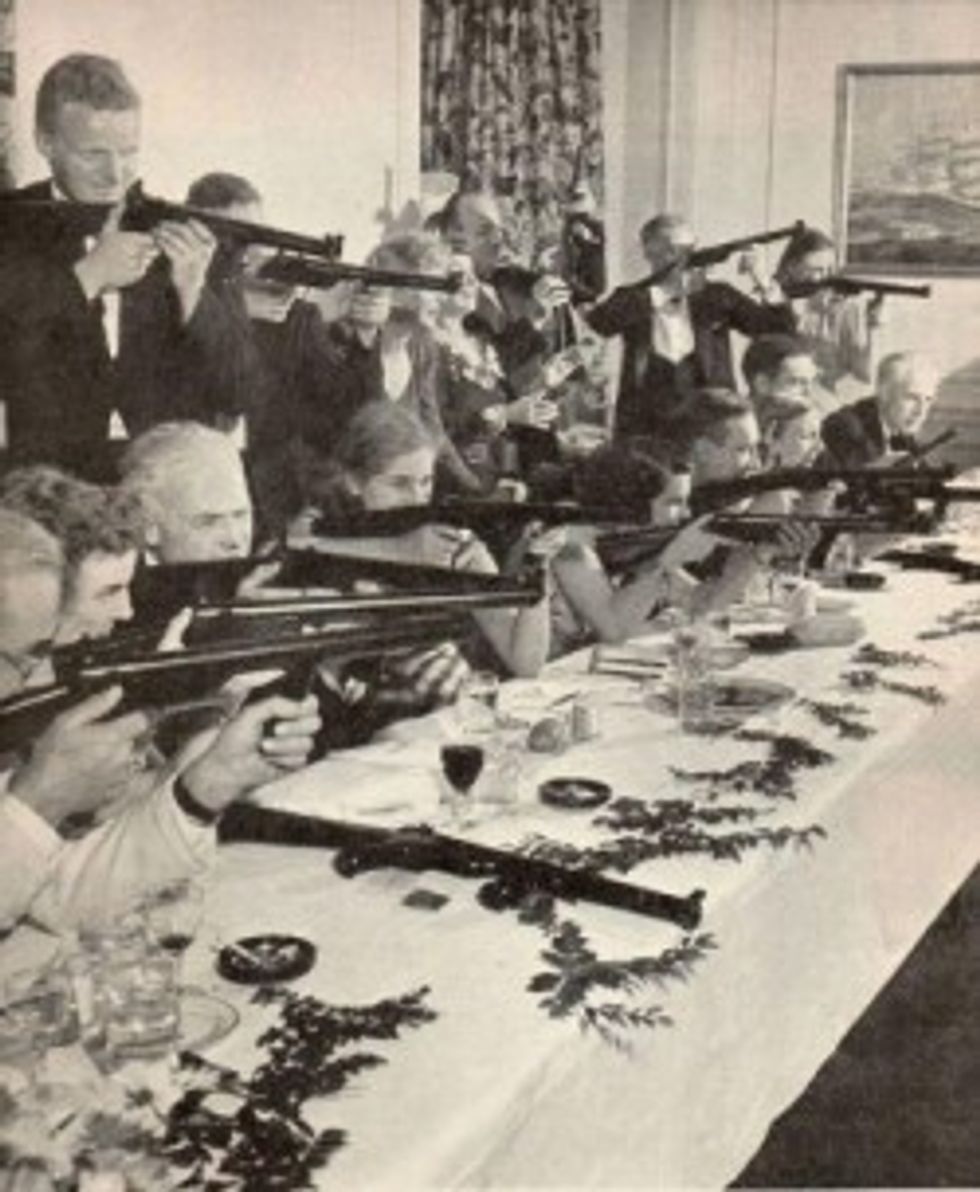 Oh man,nice time was fun while it lasted, but all good things must come to an end. In this case, every nice thing in the world comes to a screeching halt because Ted Fucking Nugent would like to share some of his feelings about guns and American History with you:

Speaking to fans during an NBC-sponsored gun show, Nugent said that Obama “is attempting to re-implement the tyranny of King George that we escaped from in 1776,” adding: “If you want another Concord bridge, I’ve got some buddies.”

The comment was a reference to the Battle of Concord, in which a British soldier broke a standoff and fired upon assembled American militiamen, in what later became known as “the shot heard around the world” that helped launch the Revolutionary War.

He added that Obama “hires, appoints and associates with communists,” and that he’s “an evil, dangerous man who hates America and hates freedom. And we need to fix this as soon as possible.”

Oh for fuck's sake shut up Ted Nugent. If Bamz hired communists, yr Wonkette would know it because we would like Obummer way better if he had commies on his payroll!

We wish, pretty fervently, that Ted had made these remarks at one of the Gun Appreciation Day gun shows where people showed off their appreciation for weapons by getting shot:

In Raleigh, a shotgun went off when the owner was taking it out of its case at a security checkpoint, injuring three people. In Indianapolis, a 54-year-old man appears to have accidentally shot himself in the hand as he was leaving a gun show. And in Ohio, a dealer was checking out a purchase when he pulled the trigger by accident and injured his friend. Although he had removed the magazine from the weapon, a round remained in the chamber.

Perhaps the Nuge would like to send a gift basket to the dude that managed to take out three people at once while having to go through a communist socialist security checkpoint that was probably ordered by Obama.

We know, we know. This sort of thing is the Nuge's bread and butter, because there's no way anyone is actually paying him to make music any longer. Media Matters has a helpful rundown of recent idiocy from ol' Ted, including telling people he'd be dead or in jail if Obama was elected again (TED PLEASE DO EITHER OF THESE SOON!) and requesting that many people, mostly ladies, suck on his machine gun. Ted, honey, no one wants to suck on anything you have, literally or metaphorically.

OH HEY GUESS WHAT? Once again, in the time it took us to write yet another stupid post about Ted Nugent, there was yet another shooting at a school! But hey, at least this was a college!

Officials believe two students were wounded in crossfire as two people shot at each other at a Texas community college Tuesday, a school spokesman said. One of the shooters was also injured and is in custody at the North Harris Campus of Lone Star College, spokesman Jed Young said. The other shooter fled the campus, he said.

If only everyone at campus had been armed! Then there could have been EVEN MOAR CROSSFIRE, which would have solved everything.

Seriously, can we just send these types of gun enthusiasts to an island somewhere? Ted Nugent can be their new god, and we'll be able to stop writing about them. Everybody wins.