Ted Nugent: Guns Don't Kill THAT Many Kids, But What About Swimming Pools, Huh? 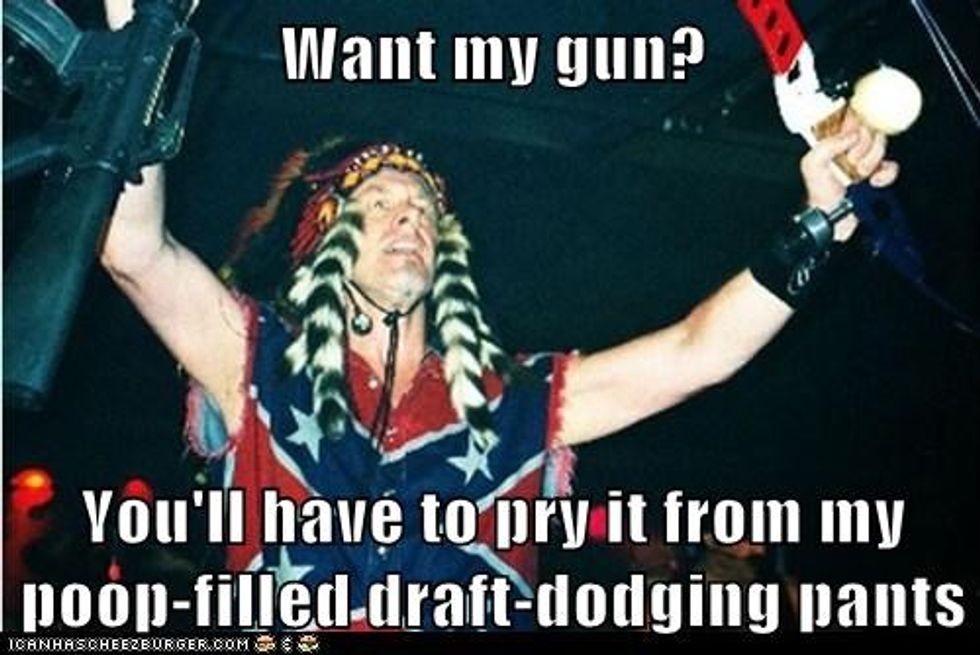 Ted Nugent has hit on a strategy that's sure to end all calls for improving gun safety forever: Just say that the number of kids killed in accidental/irresponsible shootings is negligible, then point to something else that kills more people, and then, VOILA! No more liberals bitching about his precious guns!

In the most recent WND column with his name on it, Nugent or his ghostwriter points out that children killed by guns are nothing to talk about, at least not compared to the number of kids who die by drowning, so Barack Obama is a hypocrite.

After noting that drowning kills roughly 3500 Americans a year, and that the Centers for Disease Control identifies drowning as the "second-leading cause of unintentional deaths for kids 1-14 years old," Nugent points out that compared to the deadly swimming pools in our backyards, guns just ain't a thing at all:

The Big Lie about guns is that innocent kids are being gunned down or are accidentally shooting each other. Compared to drowning, gun-related deaths don’t even register.

Now, Nugent is ad least willing to admit that the number of children killed in shootings is somewhere above zero, but he doesn't want to talk about what that number might be, for some reason. He also doesn't want to mention just how high firearm deaths rate in the CDC's data. Besides, only bad kids get shot:

Indeed, some kids do die in gun-related deaths, mostly in the president’s old stomping grounds of Chicago. However, very few kids under the age of 10 die or are injured as a result of gun-related accidents.

The vast majority of teenagers who die as a result of guns are involved in gangs. They are punks, thugs and street rats who have dropped out of school and let out of their cages over and over again by a so-called “justice system” gone bad.

And with a convenient handwave, all shooting deaths of kids are converted into an unfortunate side effect of all those criminal blacks running riot.

As for children under 10, they don't signify, since "very few" die in shooting accidents. Say, Ted, how few is "very few"? Oh, he doesn't say. But here are a few numbers: In the year following the Newtown Massacre, Mother Jones tallied 194 kids under 12 shot to death; 84 in accidents 103 in homicides, and 7 due to other causes. The overwhelming majority, 127 of them, died in their own homes. A report by Everytown for Gun Safety also found that at least 100 children died in unintentional shootings between December 2012 and December 2013 -- and also suggested that federal statistics badly undercount accidental shootings. A New York Times investigation found similar problems with gathering accurate statistics on gunshot deaths, again finding that "accidental shootings occurred roughly twice as often" as federal statistics reflect. And Everytown for Gun Safety reports 88 kids have been shot to death in the first months of 2015 (this list compiles accidental shootings, but does include children over the age of ten, so maybe it's not evidence at all).

We must acknowledge, however, that none of these sources separated out "innocent children" from the punks, thugs, and street rats, who apparently had it coming. Still, it's reassuring to know that these deaths really don't matter, because other things kill kids too, and all we need to do is trust parents to be responsible, according to Nugent.

Oh, and he was just joshing when he said President Obama needs to do something about swimming pool safety, too:

Hyperbole aside, I don’t advocate banning, restricting or imposing other nonsense rules and requirements on those who own backyard swimming pools [...]

The even uglier truth is that if liberals and their lapdog media pawns ever set their sights on backyard pools, backyard pools will go the way of lawn darts.

Funny you should mention that, Ted -- as you well know, cities and states have a whole lot of rules about swimming pool safety, like requiring fences, lockable gates, drain covers, and the like. It's pretty safe to say that swimming pools are more tightly regulated than guns, and by gosh, no one freaks out that Big Government is about to impose tyranny when a zoning law requires safety measures for pools. (Yes, yes, we know, the right to have a pool isn't enshrined in the Constitution, either). Weird you should mention the lapdog media, though: Tighter safety rules for swimming pools have indeed gone into place after horrible drowning accidents, and yet swimming pools are still common. Then there's this inconsequential functional distinction: When a swimming pool is used as designed, people swim and splash around in it. When a gun is used as designed, it puts holes in people.

It's almost as if Ted didn't think through that analogy very well.

But sure, have it your way, Ted: "Guns don't kill kids, and neither does water." We're sure that will be of great comfort to the parents of the 88 kids listed, by incident, right here. It appears to be a running tally, so that number is likely to keep growing.