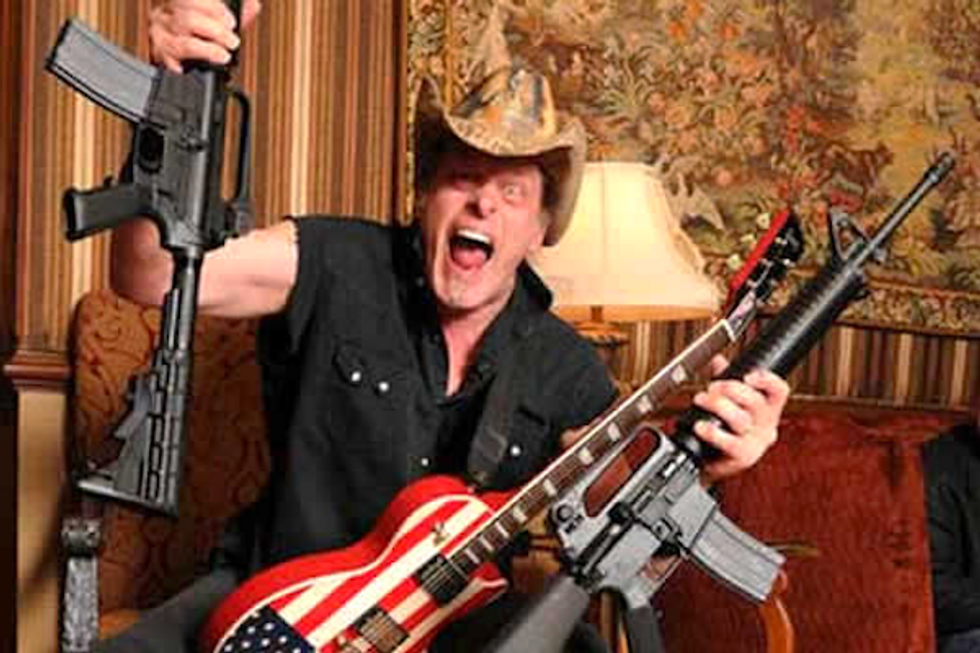 As we all know, the National Rifle Association exists to protect the rights of "responsible gun owners" in our nation.

Regularly, it rails against those of us who believe in things like "background checks," chastising us for being so cruel as to not trust that the people we want to inflict such cruelties upon are merely looking to purchase guns for the purpose of self defense and hunting. It is so MEAN, they say, to ever for a second think that a man armed to the teeth with AK-47s in the middle of your local Starbucks may be a threat to you or your loved ones. The organization is so trusted and beloved by Republican lawmakers that Mitch McConnell recently stated that the Senate should not confirm any Supreme Court nominees unless the NRA has given its approval.

Sitting on the board of the NRA is conservative firebrand and child rape advocate Ted Nugent. Here is a thing that Ted Nugent posted to his Facebook the other day!

It is a video of Hillary Clinton being shot.

Get it? It's funny because it's Hillary Clinton being shot! Ostensibly by a gun owner who is mad about gun control and feels it is unnecessary! What a great way to show that, huh! Gun control: It's a bad idea because then who will assassinate presidential candidates that Donald Trump supporter Ted Nugent does not like?

Of course, according to Nugent, the NRA, and most Second Amendment advocates, one of the most important reasons to never implement gun control is that it will prevent people from standing up to a tyrannical government (AKA HILLARY CLINTON), which is of course why the Constitution prohibits sending people to jail for assassinating or attempting to assassinate government officials and totally allows for government coups.

Oddly, one of the reasons many people support gun control measures like background checks and waiting periods is because they (for some reason) think it should actually be more difficult for Responsible Gun Owners to murder people and assassinate politicians.

In fact, it was even why total commie Ronald Reagan supported those things back in the day:

"This nightmare might never have happened if legislation that is before Congress now — the Brady bill — had been law back in 1981.

Named for Jim Brady, this legislation would establish a national seven-day waiting period before a handgun purchaser could take delivery. It would allow local law enforcement officials to do background checks for criminal records or known histories of mental disturbances. Those with such records would be prohibited from buying the handguns."

Of course, this was selfishly motivated by the fact that Reagan and his press secretary somehow did not have a good time being shot by John Hinckley, who was merely protesting a tyrannical government that refused to force Jodie Foster to be his girlfriend.

As RightWingWatch helpfully points out, this is not the first time Ted Nugent has openly advocated for the assassination of politicians he does not care for. In a 2007 speech, he invited Barack Obama to "suck on his machine gun" and suggested Clinton "might want to ride one of these into the sunset, you worthless bitch." Good times!