Ted Nugent: Sarah Palin Is The Dream Dr. King And The Founding Fathers Died For 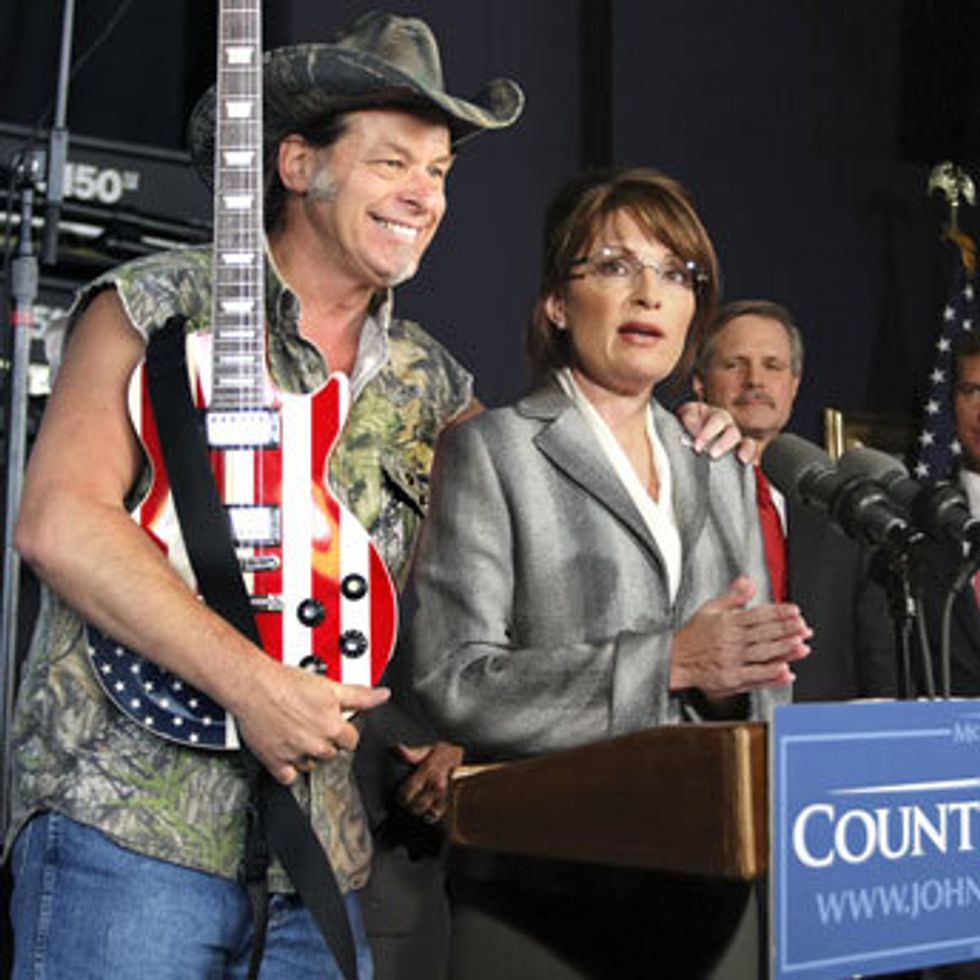 Ted Nugent said a stupid about Sarah Palin on the Lars Larson show, because it was a day, and why wouldn't Ted Nugent take any opportunity to say a stupid about Sarah Palin? She is his HERO, you guys, and even more than that, she is apparently what the Founding Fathers were prophesying all along back when they wrote the Bible. Ted explained to Lars that Palin "is the perfect example of what our Founding Fathers envisioned for an experiment in self-government.”

Note that he didn't say that it was a GOOD experiment, or the kind of experiment that would actually go well, just an experiment, the kind that the Founding Fathers liked. Apparently they were into that whole "let's see if we can make things explode" type thing, because you know, Benjamin Franklin and his science-y ways.

And also, of course, when experiments are going poorly, you can always stop in the middle and go back to the drawing board, and that is ALSO why Sarah Palin is Ted's hero. When it just got too tough to go and do governor stuff every day, Sarah Palin had the bravery and presidential spirit to just cold QUIT, praise her!

“She quit because the left hate machine was so overwhelming her with frivolous litigation that she did the most courageous thing in the world and she handed her governor duties to the lieutenant governor while she was taking on this hate onslaught of the left so that Alaska would be properly served by someone who could pay attention to the responsibilities of the office of government while she was fighting off the leftist mongrels. She’s my hero.”

You see, it wasn't because she just couldn't handle being governor anymore, it was because the Left Hate Machine was mean to her, which made it too hard for her to handle being governor anymore, so she did the Right Thing and quit, and now when Ted Nugent thinks of Sarah Palin, that Mariah Carey "Hero" song comes into his head and a single bald eagle-shaped tear forms in the corner of one of his eyes, because Ted's eyes are far more patriotic than yours are. Why can't the rest of you commies cry eagle tears like Ted Nugent?

Also, she quit because she could make more money doing reality teevee and word salading Fox News a few times a week, but those were secondary reasons, of course.

But apparently we missed out on a big opportunity when we chose that black guy over Sarah Palin (the fact that she wasn't running for president is not relevant, all Americans should have written her in), because we did not understand that "Martin Luther King died so that we would someday judge by content of character instead of color of skin, and there's never a right time for a COLOR of anything!" You see, if we weren't so racist against white Alaskan snow grifters, we would have been able to look past the color of Sarah Palin's skin and made her president for life, instead of giving it to that black guy with the funny name. Silly liberals, there's never a Right Time for blacks! Does King's death mean NOTHING to you?

Toward the end of the interview, Ted Nugent hocks Sarah's book and her reality teevee show and her new line of moose seasoning, and we are finally completely convinced that yes, Sarah Palin is our hero too, and god, how could we have ever been so stupid? We are sorry, Sarah Palin for president every time from now on.