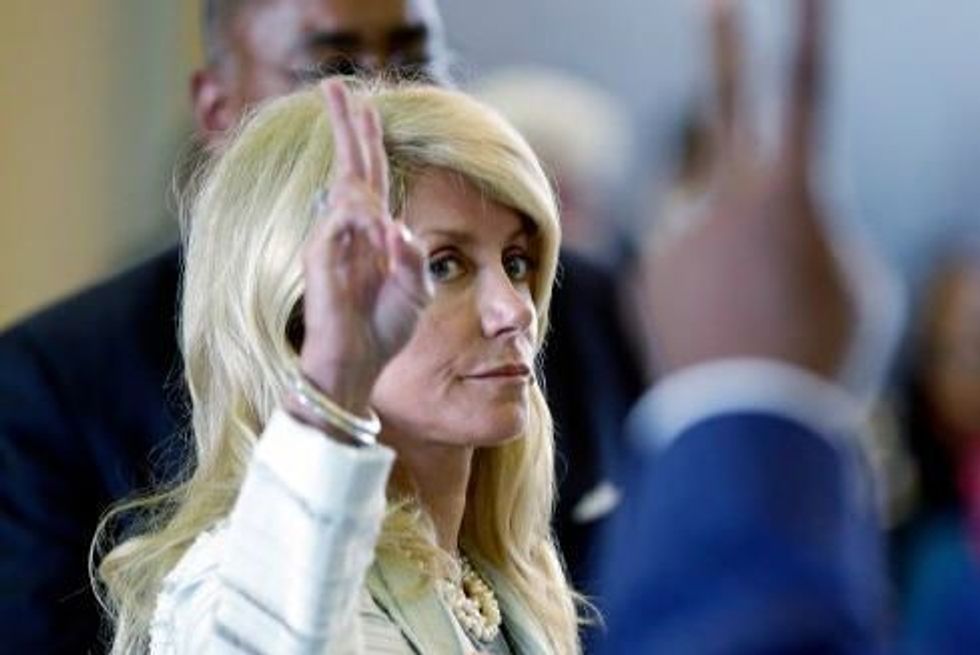 We don’t know much about Texas politics, and we don’t want to. But it strikes us as maybe a bit desperate of Republican gubernatorial candidate Greg Abbott to becampaigning with Ted Nugent, the terminally conservative guitar man of "Obama is a sub-human mongrel" fame, and Hillary Clinton "should ride my machine gun" fame, and "I will either be dead or in jail" if Obama wins re-election fame, and "I will poop in my pants to avoid fighting in Vietnam" (paraphrased) fame, and other fames. He is quite famous, for being simply awful, and also playing guitar pretty good.

This race hasn't been polled in a while, but RCP had Abbott up by about 10% in November, and that was before Wendy Davis was a terrible liar because she was only a dirt poor single mother for a while before she wasn't anymore, on account of getting married, like conservatives say poor ladies should do, then getting divorced, which conservatives do all the time, just like everyone else. We can't find trouble for Abbott in the polls, except for this one: The Wonkette Poll Of Is There Any Reason To Campaign With Ted Nugent In A Statewide Race Unless You Are In Serious Trouble? A full 100% of respondents said "Hell no, you crazy?!" (Sample size: 1.)

So is Abbott scared that sexy Wendy Davis might actually beat him? It seems so, since even Rick Perry never went as far as campaigning with Ted Nugent -- in Nugent's own words, he's "too divisive." The Nuge did play at Perry's 2007 inauguration, but that was well before he had gone all-in with the militant idiot bilge -- the "ride my machine gun" comment came later that year, and the craftsman behind such epoch-defining songs as "Wang Dang Sweet Poontang" and "Yank Me, Crank Me" hasn't looked back since.

Nugent didn't say anything too outrageous at his North Texas campaign appearances with Abbott:

on Tuesday morning, he played it safe, calling Abbott "the epitome of what our Founding Fathers wanted.

Sadly, the Wendy Davis camp failed to capitalize on this by issuing a really really boring statement:

“Greg Abbott’s embrace of Ted Nugent is an insult to every Texan — every man, woman, husband, and father. If this is Greg Abbott’s idea of values, it’s repulsive,” Davis said in a statement.

SNOOZE! Come on, Wendy, What Would Ann Richards Do? Probably say something like "Ted Nugent? I guess we can forget about the racist cretin vote," except it would be like 50x more witty and awesome. Like we said, we do not know much about Texas politics, but we doubt that these kinds of semi-outraged yet strangely sanitized and bloodless statements really resonate with people.

Finally, one time we read this book by Ted Nugent, for laughs, and had many laughs! We especially laughed when he writes about how he is so responsible and safe with his guns that he's only experienced TWO accidental discharges -- one from a rifle that he'd mistakenly put back on the gun rack while it was still loaded! What a goofball!

If you are planning to give money to Wendy Davis, please send it with a note that says "Fire whoever is writing your words for you and hire someone with a personality."