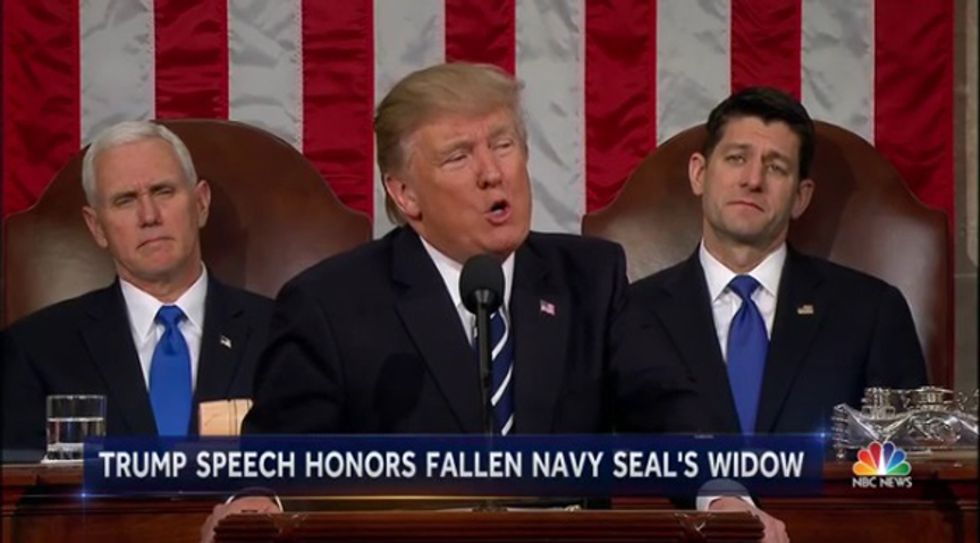 Like any good con man, Donald Trump sure is good at emotional manipulation, evading responsibility, and lying through his never-smiling teeth. All of those skills were on display Tuesday, when he tried to blame Barack Obama for any problems with the January 29 special operations raid in Yemen that resulted in the death of Navy SEAL William "Ryan" Owens as well as multiple injuries to U.S. special operators, the deaths of an unknown number of civilians (including an 8-year-old American girl), and the loss of a $70 million MV-22 Osprey aircraft. But in his speech Tuesday night, Trump turned around and insisted the raid was a huge success, according to "our Great General Mattis," which is not a real military rank. Trump followed that up with the speech's emotional peak, a supremely cynical focus on Owens's widow, Carryn, who became the tearful symbol of Owens's sacrifice. Surely the raid had to be a success -- just look at the grieving widow!

Definitely sick of all the winning.

Somebody needs to get Jason Chaffetz investigating this right away.

Except, despite Owens's heroism and sacrifice, evidence continues to emerge that the raid itself was badly planned and executed, and according to "ten current U.S. officials across the government who have been briefed on the details," the raid didn't actually gather any significant intelligence. Not that we should ever admit such a thing, since under the new rules of Trumpism, questioning the value of the mission is equivalent to denying Owens was a hero, and why do you hate America and The Troops?

An unidentified "senior U.S. official" told the Associated press the Pentagon had compiled a three-page list of information gathered in the attack on an Al Qaeda in the Arabian Peninsula (AQAP) compound, including data on their targeting priorities and training methods. But according to some U.S. officials who spoke to NBC News, the information on that list wasn't especially useful; they characterized it as "neither actionable nor vital."

One senior Pentagon official described the information gathered as "de minimis," and as material the U.S. already knew about.

However, another U.S. official said the information contained hundreds of contact details from a variety of communications apps, suggesting possible links to the Europe and the U.S.

So it's looking like the best that can be said of the raid's intelligence value is that it's a mixed bag; as for the AQAP fighters killed in the raid, the most senior was a guy named Sheikh Abdel-Raouf al-Dhahab, who the officials who spoke to NBC News said wasn't a very high-value target, but "they hoped intelligence at the site could lead them to other targets."

There also appears to be some careful backtracking on the part of Pentagon officials; Sen. John McCain said he understood the raid had been designed to capture or kill high ranking AQAP militants, but after the raid, the Pentagon described it as a "site exploitation mission" aimed at gathering intelligence. After McCain said it was about going after specific terrorists, defense officials

did not dispute McCain's characterization, saying they were hoping to kill or capture certain militants, though they declined to name them.

Because we are big old cynics, that sure sounds like maybe McCain was right about the raid's primary goal, and then when no top AQAP guys turned up dead in the rubble, the mission was then all about the laptops and hard drives recovered. We're happy to acknowledge that's pure speculation on our part.

As for the ultimate value of the intelligence material recovered in the raid, that ranges from the unnamed sources telling NBC it wasn't of much value, to the glib bullshit of White House press secretary Sean Spicer's response Monday to Owens's father, who criticized the raid and blamed an over-hasty decision by Trump for his son's death. Spicer insisted,

"I can tell him that on behalf of the president, his son died a hero and the information that he was able to help obtain through that raid, as I said before, is going to save American lives," he said. "The mission was successful in helping prevent a future attack or attacks on this nation."

In a few years, when someone writes the definitive book on what now looks like an unproductive clusterfuck that killed too many people, we'll be sure to let you know which take on the raid was more accurate. We're not inclined to accept any spin from Spicer, who's so adept at grasping at straws that he explained how a line from My Little Pony disproved accusations that Melania Trump's RNC speech was plagiarized from Michelle Obama. He was lying then, and we see little reason to believe him now.

In the meantime, we'll look forward to the endless congressional hearings into the Yemen raid. Surely a series of investigations must be on the way. You know for a fact that if Hillary Clinton had authorized it, we'd never hear the end of outrage about how she'd casually sacrificed a brave Navy SEAL for nothing.

Yr Wonkette is ad-free now! Help keep it that way with a generous donation if we float your boat. Disclaimer: If any floating boats are accidentally strafed, Donald Trump will blame Obama.)