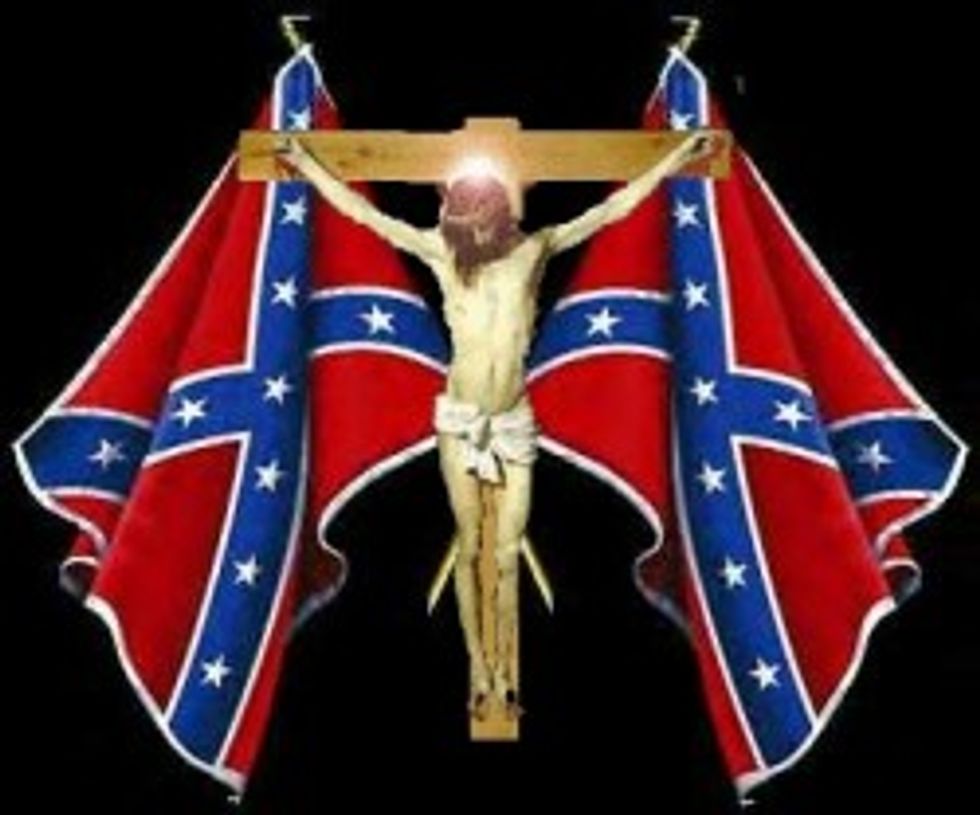 In the NBA right now it is hard to justify giving anybody other than Lebron James the Most Valuable Player award. No one else has displayed such individual dominance in the game, and it is virtually impossible to imagine anyone else catching up with the forward. Likewise, we here at Wonkette are simply in awe of Tennessee state Senator and fully realized moral scold stereotype Stacy Campfield and his amazing record of performance art-worthy work in the first three months of this year. This is what a Legislative Shitmuffin of the Year champion looks like people!

So how could Campfield top his latest attempt to facilitate the parental abuse of gay kids, his bistro counter sit in on behalf of homophobes, or his genius way to monazite the blogging industry? Well how about shutting down any semblance of voluntary sex education for consenting adult students inside of his state for no damn reason? CAMPFIELD FOR THE WIN!

Campfield can at least be credited for getting upset about an event that is happening outside of his warped fantasy life (unlike, say, the time he tried to address the imaginary issue of prisoners buying lottery tickets). Sadly, however, he is interjecting his rod of correction right into everyone else’s fantasy life by attempting to abort UT Knoxville’s “Sex Week” before it comes to term. It seems the use of state money for a conference that includes a lesbian bondage expert and an oral sex workshop gives the vapors to an organization that only likes to fund wholesome activities like watching uncompensated twenty somethings bash each other into lifetime of CTE for their entertainment.

We believe in a comprehensive, sex-positive understanding of sexuality that promotes sexual health, pleasure, and empowerment. The dialogue we hope to cultivate will be LGBTQ-friendly, relevant to a wide array of audiences, medically accurate, held in a safe-space, and enlightening. The event does not presume everyone is having sex, so Sex Week will include programming for people who are not sexually active. SEAT will address issues of gender, sex, sexuality, and all the aspects of our lives that are affected by these issues, including culture, politics, religion, and even the economy. SEAT will be sensitive to sexual discourse within larger issues. Sex has historically been a site of oppression; therefore, discussion about sex and sexuality are important because they involve ideas not only about our personal physical and emotional lives but also the sociocultural context in which we're immersed.

ZZZZZZ Where is the vibrating butt plug demonstration UTK? Why are you leaving out the proud Knoxville piss drinkers from the conference? WE THOUGHT THIS WAS AMERICA. WHERE IS THE GODDAMMED FUCKSAW?

Stacey Campfield might want to live in a district where everyone remains a terrible, horrible, no good, very bad lay. But you have give it up for the nice people associated with this demure attempt by UTK to enter into the 19th century by acknowledging that even people in the bible belt fuck for pleasure (if not just to piss off their inevitably hypocritical elected officials). Here is one of the adorable perverts associated with this Smutstock:

When I came of age in the 1960s, life seemed simpler. Ready access to contraception had led to a relaxed attitude about sex. Since then, however, things have become much more complex so the proposed Sex Week that will offer both accurate information and an open discussion about all aspects of sexuality is an important event for UTK. College is a time for learning and exploration, not just in the classroom, library, and research laboratory, but also in one's personal life, including sexuality...

That comes from “Faculty Supporter” and stone cold silver fox Dr. Jeffrey Kovac, who despite being a renowned chemist and historian of science still feels the need to insist that college exist as some sort of comprehensive and multi-dimensional experience in a young persons life. Fucking hippie. Clearly this dumb professor has no idea how to prepare his students for a wonderful life as an angry single man stuck in the legislature of one of America’s laughingstock states (Tennesee: proudly reminding people that you’re not from Mississippi since 1796), reduced to writing bills designed to inflict medieval levels of punishment on children while intermittently engaging in some cross-ethnic public cosplay. That is what a fulfilling sex life is supposed to look like folks!

But don’t feel sorry for Campfield just because he has yet to find a decent post-Thursday night mass restaurant in Knoxville that will dare to serve his nasty hatin’ ass. Unlike his previous notable attempts at gaining national prominence through being a shamelessly spitting gila monster of putridity, this time his little campaign of reactionary assholery succeeded and UTK halved the available monies for the program. And as an extra non-consensual kick in the balls, the UT chancellor also announced that his office is "studying and evaluating the funding and planning of student activities at all UT campuses and institutes.” YAY NOBODY IS GETTING LAID!