Tennessee On Slavery: Sorry Not Sorry 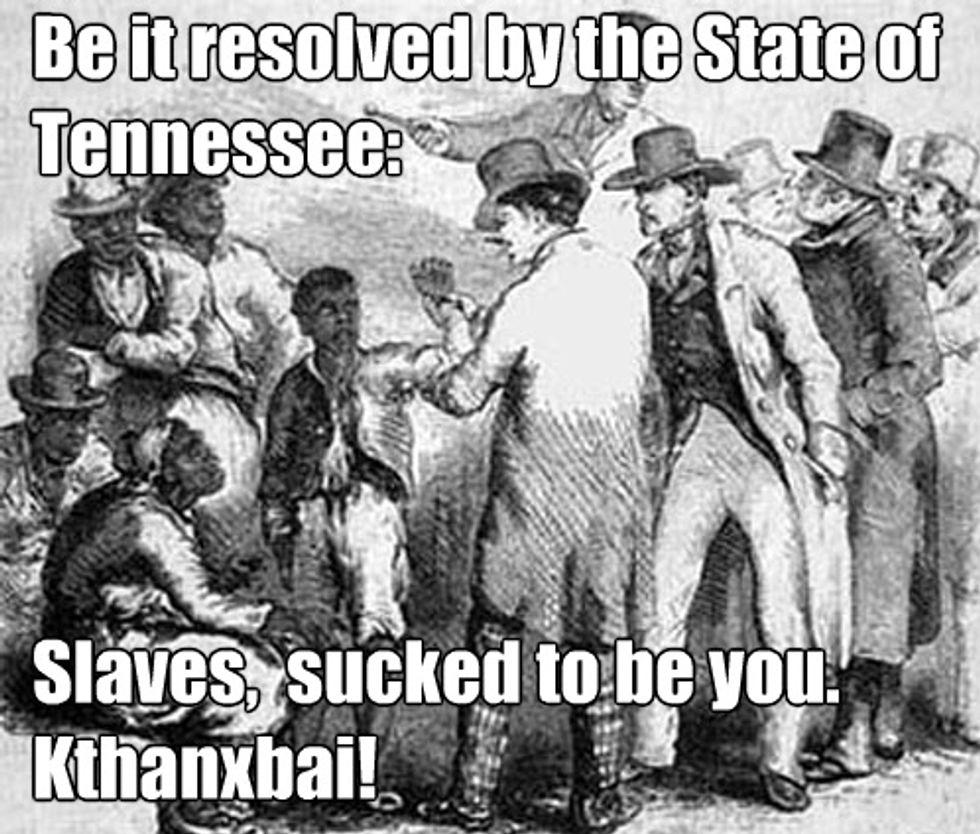 Let's have a half-round of applause for the brave souls in the Tennessee House of Representatives, who boldly voted Wednesday toexpress "profound regret" for both slavery and for segregation, although the chamber couldn't quite bring itself to actually apologize for either. Baby steps, right? After all, just like the Florida Congresscritter who's unsure whether the Civil Rights Act is Constitutional, you wouldn't want to rush things on a sensitive matter like "are we sorry for enslaving people?"

The resolution, sponsored by state Rep. Mike Turner (D-Nashville), condemns the "fundamental injustice, brutality, and inhumanity of slavery and the discrimination that was slavery's legacy." The original draft's language offering "profound apologies" for slavery was removed by Republicans; we haven't actually been able to find any stories citing any legislators explaining why they thought that was necessary, but we'll just take a wild guess and say that it's probably out of respect for the past, since after all today's Tennessee House didn't cause slavery, so they probably just would feel mighty presumptuous to apologize for something they had nothing to do with.

Or maybe it had a little more to do with the position taken by Mississippi Senate candidate Chris McDaniel a few years ago -- audio has surfaced of that fine neo-Confederate gentleman vowing on his radio talk show, in 2006 or 2007, that if his state or Congress ever voted to pay blacks reparations for slavery, he would refuse to pay his taxes ever again, because that would just be wrong. You have to be principled about these things, after all, and an apology might just stir up trouble. Far better to just say it sure was awful that all those things happened back then, and to emphatically point out it was a very long time ago, and my grandparents came here from Ireland in 1905 stop blaming me for slavery why don't you tell the young bucks to stop shooting each other Heritage not Hate STAND YOUR GROUND!!!!

This has been another episode of Today In the National Conversation on Race. Thank you, and tune in again tomorrow, and forever.

Follow Doktor Zoom on Twitter. He was raised Catholic, and has no difficulty profoundly apologizing for just about everything.