Tennessee Republican Too Busy Sexting To Resign Over Sexting Scandal 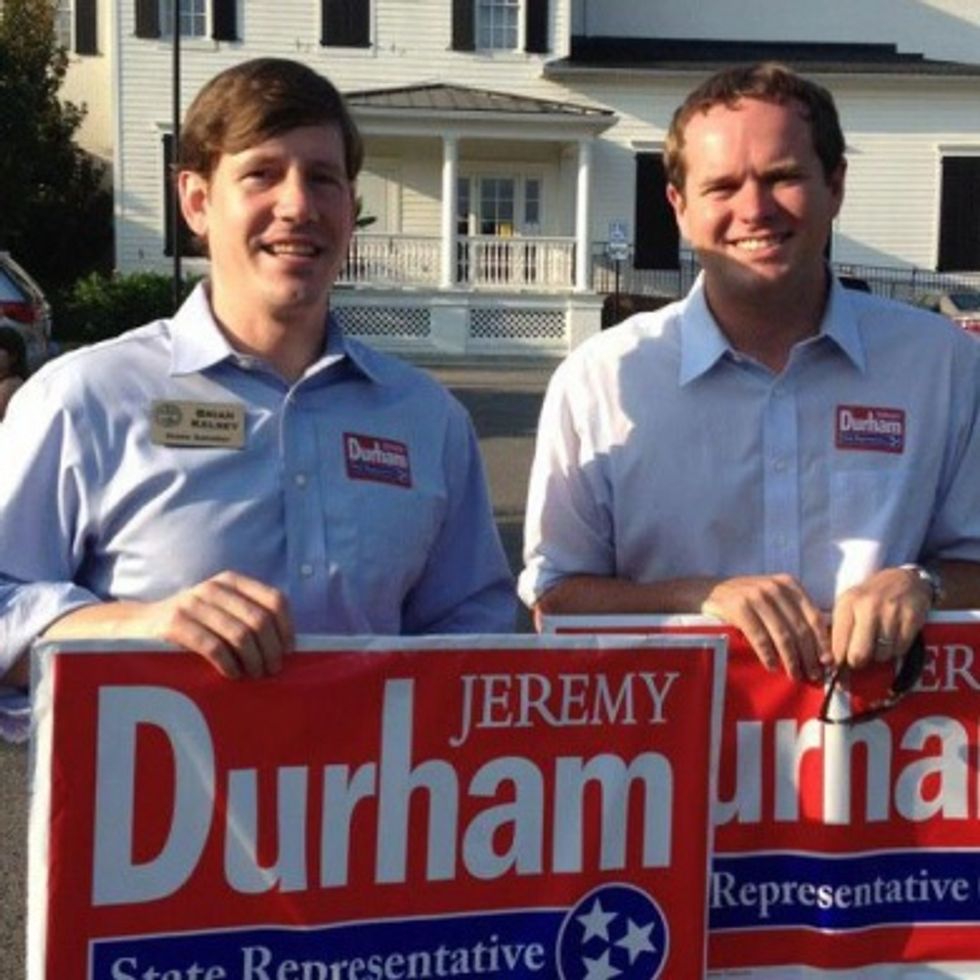 On the right, the sexter Rep. Jeremy Durham. He probably has a boner right now. On the left, TN State Sen. Brian Kelsey. We don't know anything about him. (OR DO WE?)

It is a day in America, which means somewhere an elected Republican official has his freedom stick in his hand, and he's threatening to use it in some gross way. The boner at the center of today's story is attached to the man crotch of Rep. Jeremy Durham, from the Tennessee state legislature. And what does his boner do? It gets excited about sexting ladies what are not his wife, of course. Three ladies, to be specific:

One woman in her mid-20s, who worked in various capacities at the statehouse, said during the 2013 legislative session, Durham repeatedly sent text messages and Facebook messages, sometimes late into the night.

The other ladies describe similar things, and of course Durham says he can't even remember and bitches probably be lying. Did we mention this little man is only 32? We think that might help you to contextualize this, especially since The Tennessean quotes "a former GOP lawmaker" who says the Tennessee lege, for many, is basically a nonstop party.

We are guessing it's the usual story: Manchild state representative with more testosterone than sense meets sexxxy ladies at work, uses his power as a big politicking guy to convince them to "call me maybe," and then drunkenly bugs the shit out of them all hours of the night because he can't understand why anyone in the world wouldn't want to drop everything and fuck him at any moment.

Then he forgets texting "I have a penis and I am a v. important person" to every lady he's ever met at 3:30 AM, because if you don't read your own drunk texts the next morning, that means they didn't happen.

Durham resigned from his position as House Majority Whip, but doesn't want to resign his seat, because he doesn't wanna OK? However, fellow Republicans in the lege are asking him to please resign so they can go back to work now without thinking about his dick:

“In light of these recent revelations, I do think it is important that Representative Durham step down from his position as a member of this body so that the legislators can continue to focus on the important work that Tennesseans expect us to focus on," [Tennessee Republican Party chair Ryan] Haynes said.

[contextly_sidebar id="x8YUVJpSPdf2f4ASbVG3KpBqfnCJSlet"]The Tennessee lege does IMPORTANT WORK, y'all. Stop laughing. Durham's esteemed Republican colleagues have been very busy coming up with stupid ideas to ban the Supreme Court's ruling on gay marriage, and losing; working to make sure you can carry all your guns in public parks, because hey, they allow bicycles in parks, which are also dangerous; coming up with ideas for really cool new racial organizations like a National Association For The Advancement of White People; and ... you get the idea.

Also when he was in college at the University of Tennessee at Knoxville, he was arrested for "vandalism, theft, and aggravated burglary," so all together now, class, HE SEEMS NICE.