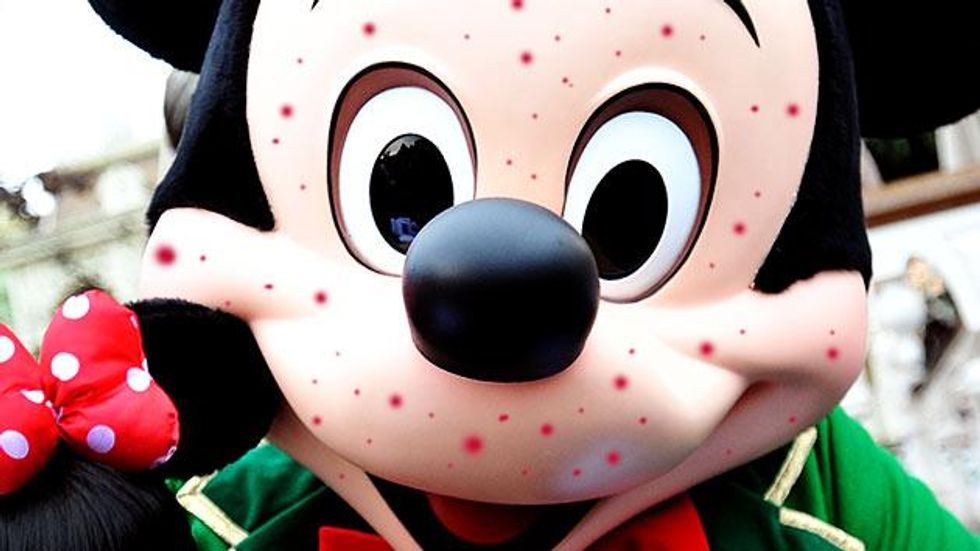 Disneyland: it's the Most Magical Place on Earth. So magical that among recent attendees, at least19 have been diagnosed with measles, a disease much of the planet had essentially eradicated.

Despite last week's nice time about public schools' ability to require vaccinations because we still dabble in established science, this remains the Land of the Free and you, Jack and Janie Liberty, still get to choose if you want your child to endanger public health. That's why we lag behind 100+ countries, including Cambodia and Burundi, when it comes to vaccinating our children. Exceptional!

"Well that won't be my kid," say most mommies and daddies. "Little Evan got all of the shots. See, I even scrapbooked the bandaids from the visits. I'm an amazing parent." Well, maybe. But that's not how this works. In other words, It's a Small World.

Officials in California said that of the 16 cases in the state they have only verified that two were fully vaccinated against the disease. Some were partially vaccinated and at least two were too young to be vaccinated.

First, I can't ignore the cynical silver lining. When my lil babby grows older and inevitably begs me to wait in line for hours so she can take selfies with animatrons (*shudder*), a highly infectious disease is a pretty solid counter-argument.

“We can’t go, you might die,” will shut down the conversation a lot better than, “No we can’t go because daddy would rather drink bleach and tour with Todd Starnes' poorly choreographed Christmas Spectacular.”

But alas this is sad, despite the involvement of a soulless media company like Disney. So why is it possible to blow thousands of dollars and return home with not only a picture of your vaccinated child standing next to a defeated actor in a duck costume, but also a case of the measles?

According to KOMONews.com, Jamie Smith, a foster mother of seven, is unwilling to expose herself or the children in her care to flu vaccine, which she says contains mercury and could cause brain damage.

“I’ve done a lot of research on it and I don’t like some of the side effects that it has,” said Smith to KOMO.

Currently under Smith’s care is a two-week-old boy who could be removed from the home if Smith follows through with her refusal to take the vaccine or get the older children in her home vaccinated. “He was born on Christmas. He’s our little Christmas baby,” Smith said.

Guys, she has done a lot of research. Just not on flu vaccines or Thimerosal. But was The Other Christmas Baby vaccinated? How did He turn out? Just light some frankincense and *bam* pretty soon your boy is hanging with lepers but still totally healthy. No big deal. And what about the flu vaccine's actual exotic side effects? Welp, if "sore arm" and "headaches" are the worst outcomes, that actually sounds like a decent day for a foster mother of seven.

But maybe that's just what the nefarious hucksters at the American Academy of Pediatrics and Big Salk want you to think. Does the increase in cases of infectious diseases like whooping cough, measles and mumps really correlate to a decrease in vaccination percentage? Or are those just peer-reviewed studies?

And if the unvaccinated are really to blame for the recent scourge of diseases endangering the infants, children, and immunodeficient of Southern California, who's the primary cause? It has to be the dirty riffraff and the ill-eagles, right?

Whether it’s measles or pertussis, the local children statistically at the greatest risk for infection aren’t, as one might imagine, the least privileged — far from it. An examination by The Hollywood Reporter of immunization records submitted to the state by educational facilities suggests that wealthy Westside kids — particularly those attending exclusive, entertainment-industry-favored child care centers, preschools and kindergartens — are far more likely to get sick (and potentially infect their siblings and playmates) than other kids in L.A. The reason is at once painfully simple and utterly complex: More parents in this demographic are choosing not to vaccinate their children as medical experts advise. They express their noncompliance by submitting a form known as a personal belief exemption (PBE) instead of paperwork documenting a completed shot schedule.

The weird part about anti-vaxxers is that while they dismiss settled science as to the effectiveness and relative safety of vaccines, they're totally cool with trying to leach off the Herd Immunity aspects of virology. Make no mistake, anti-vaxxers believe vaccines are dangerous and those who partake are risking scary (and unproven) connections to diseases like cancer, autism, cankles and forehead mange. But that doesn't mean you shouldn't vaccinate your kids for the benefit of their spawn. And plus, what does a slight decrease in whooping cough/measles vaccinations for California kindergarteners from 95% to 92% since 2002 really mean?

The CDC indicates that herd immunity begins to be seriously compromised for whooping cough and measles when 6 percent or more of the population isn’t properly immunized.

Hmm. This isn't an Advanced Math Blog, but sources close to yr Wonkette can confirm an 8% unvaccinated class of kindergarteners is a bunch of dangerous bullshit.

It's easy to scoff at insane anti-vaxxers and laugh haha at Infowars and the like, but make no mistake, their insanity is dangerous. Per Alex Jones, when we all get put in the FEMA camps, they're not going to separate the vaccinated from the unvaccinated (though I do believe this should be a central part of B.H. Obama's 3rd Term Agenda). While Infowars seemingly makes stuff up out of thin air, that's not always the case. It's not just fringe quack doctors, fringe bloggers, and fringe celebrities with undue influence on the stupid. It's establishment quack doctors as well.

Last week, Mayer Eisentein passed away. Eisenstein is a long-time Chicago-area pediatrician who discouraged vaccinations and who *shocker* was named as defendant in a ton of lawsuits.

[H]is suburban Chicago practice, currently known as Homefirst, garnered an alarming record: It was on the losing side of one of the largest U.S. jury verdicts — $30 million — ever awarded to the family of a newborn in a wrongful-death suit.

In court records dating back three decades, the families of dead and brain-damaged children repeatedly alleged that doctors who work for Eisenstein made harmful mistakes — sometimes the same error more than once. His practice also has been dogged by accusations in court records that its offshore malpractice policy was phony.

Eisenstein is beloved and often cited among anti-vaxxers for his bogus-but-nice-sounding claims of preventing autism with an insane amount of Vitamin D supplements (that he sold. how awesome when it works out like that!). Infowars posted an In Memoriamvideo tribute to Eisenstein that I watched so you don't have to. Here's the tribute film I'm currently developing. It's a bit different.

Mayer Eisentein was a snake oil/health supplement proprietor who is responsible for the senseless death and injury of an incalculable number of children. He didn't die behind bars which is too bad. Vaccinate your damn kids.

(But who knows? This post is probably a False Flag anyway.)