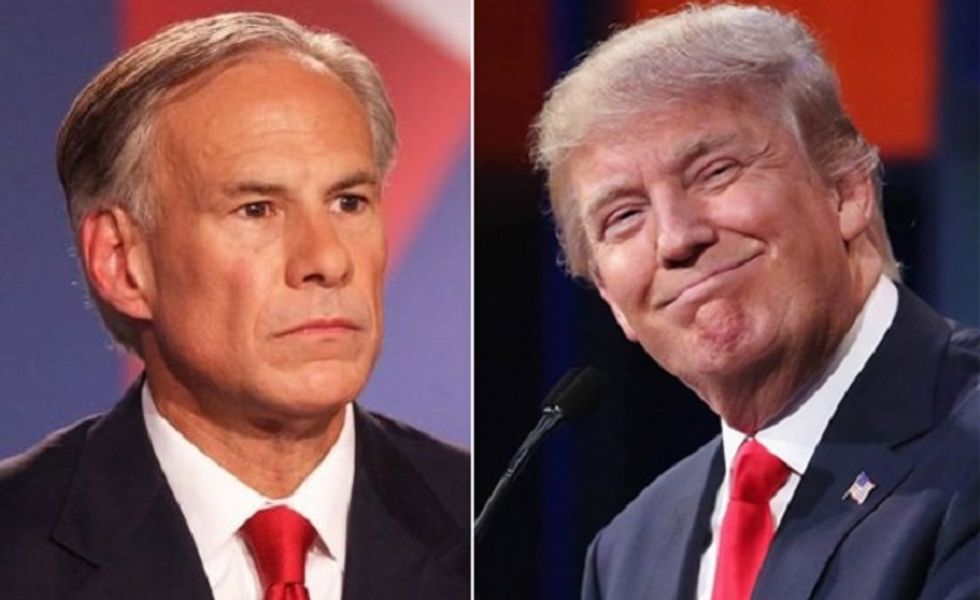 Maybe Trump just likes Abbott a whole lot is all

Now that everyone's started paying attention to Donald Trump's real-estate seminar scheme with the classy name "Trump University," we keep learning about more investigations into the scammy operation. Turns out consumer protection investigators in the Texas Attorney General's office wanted to sue Trump University in 2010 for ripping off Texas consumers for over $2.6 million, but the investigation was closed without any action, when operators of the now-defunct real estate seminars agreed to shut down operations in Texas.

By 2010, Trump U was in the process of going out of business anyway. But hey, no penalties, and more important, no compensation to the people the company bilked! And heavens no, it would be totally inappropriate -- ridiculous, in fact! -- to suggest any connection between then-A.G. Greg Abbott ending the investigation and a later donation of $35,000 from Trump to Abbott's successful 2014 campaign for governor. Shame on you for thinking that!

Oh, except that John Owens, the former head of the Consumer Protection Division when Abbott was Attorney General, now says that the decision was indeed politically motivated:

“The decision not to sue him was political,” John Owens told The Dallas Morning News. “Had [Trump] not been involved in politics to the extent he was at the time, we would have gotten approval. Had he been just some other scam artist, we would have sued him.”

Not surprisingly, Gov. Abbott's office says such a thing is not only UNPOSSIBLE, it's outright laughable, HA-HA! Abbott's communications director, Matt Hirsch, said Thursday that Owens should stop being such a silly-billy:

The Texas Attorney General’s office investigated Trump U and its demands were met -- Trump U was forced out of Texas and consumers were protected. It’s absurd to suggest any connection between a case that has been closed and a donation to Governor Abbott four years later.

Sure, consumers were protected, if by "protected" you mean no new people got scammed. As for the ones who had already been ripped off, well, hey, sucks to be them. And maybe Trump simply happened to donate to Abbott's campaign because of his intense interest in Texas politics. Except that's a little difficult to square with one small detail ferreted out by the Houston Chronicle: Trump's donation to Abbott was "the only major donation the New York billionaire has made to a Texas politician in years." Imagine that!

Owens, who retired in 2011 after 20 years, told the Chronicle that after his investigators had prepared a detailed case against Trump University, "The case was closed and all the Texas consumers were left high and dry ... We were a little shocked[.]"

Hirsch's statement dismissed the suggestion of impropriety in closing the investigation as mere media hysteria:

The unthinkable has happened -- the media's obsession with Donald Trump is now leading them to highlight the job then-Attorney General Abbott did in protecting Texas consumers[.]

[wonkbar]<a href="http://wonkette.com/594665/congratulations-texas-abortion-laws-to-keep-women-safe-doing-opposite-of-that"></a>[/wonkbar]We're not sure how "unthinkable" it really is, given the flexibility of Abbott's definition of "protection" -- remember, this is a guy who thinks cutting funding to Planned Parenthood and making legal abortions much harder to get are ways of "protecting" women.

A copy of the request to open an investigation Owens provided to the Dallas Morning News is chock full of yummy details on the deceptive marketing for the seminars, contrasted with the disappointing actual content. First, there was the misleading pitch (we've eliminated a page break to save space here):

Investigators attended a "free" seminar in Houston and documented the high-pressure sales tactics in the two-hour presentation, noting that the "free workshop" is "merely a selling ground for the Defendant Trump U's 3-day seminars and offer little useable content." And even after students signed up for the 3-day seminar for the low, low price of $1,495, they got little in the way of practical instruction. Instead of instructors walking students through the negotiation of "up to 15" complete real estate deals during the 3-day seminars as promised, what really happened was that students made at most three cold calls to people selling homes "by owner," with no deals being completed. Oh, but at least the 3-day seminar offered attendees the chance to buy more overpriced garbage:

How do you like that! Exactly the same stuff being alleged against Trump University in two consumer lawsuits in California, and by New York Attorney General Eric Schneiderman! It's almost as if there was some kind of pattern of deception there! Wonder if Donald Trump will start insisting that John Owens is secretly a "Mexican."

In May of 2010, Owens's office proposed a possible settlement that would have sought $2.6 million in restitution for people who had attended the seminars, plus an additional $2.8 million in penalties and fees.

The investigators even scheduled a May 19, 2010, meeting to pitch the settlement to Trump University representatives, but instead, says Owen, the Consumer Protection Division received “verbal notification” that the investigation and any possible lawsuit had been dropped. Owens says the decision not to sue came from the top of the attorney general's office:

The refusal of the administration to do anything stunk ... We routinely got approval to sue people. We routinely went after bogus schools that offered false diplomas[.]

[wonkbar]<a href="http://wonkette.com/526685/donald-trumps-university-kind-of-scammy-believe-it-or-not"></a>[/wonkbar]This isn't the first time a Republican attorney general has wished an investigation of Trump University into the cornfield, either. In 2013, shortly after New York A.G. Eric Schneiderman launched his fraud lawsuit against the "school," Florida Attorney General Pam Bondi said she too would look into allegations of fraud against Trump University in the Sunshine State, but then that possible investigation quietly disappeared when Bondi decided there was nothing to investigate, no problems at all. By sheer coincidence, three days after Bondi mentioned she might investigate Trump University, a Trump-run foundation donated $25,000 to help with her re-election effort. At some point later, she discovered there was nothing to discover. And wouldn't you know it, Bondi's campaign just happened to be the only state attorney general race Trump contributed to in 2013.

[wonkbar]<a href="http://wonkette.com/602443/donald-trump-media-veterans-donations"></a>[/wonkbar]Needless to say, it's impossible to prove any quid pro quo between the investigations into Trump University being dropped in Florida and Texas, and Trump's subsequent interest in supporting the campaigns of A.G.'s who made those investigations go away. Only a very cynical person would suggest such a fantastical conspiracy theory, so just chalk it up to coincidence, OK? We already know you should never ask unkind questions about Donald Trump, because they only cause trouble. Trump only does good things, and it's a good thing nobody tried to sue Trump University in Florida or Texas.