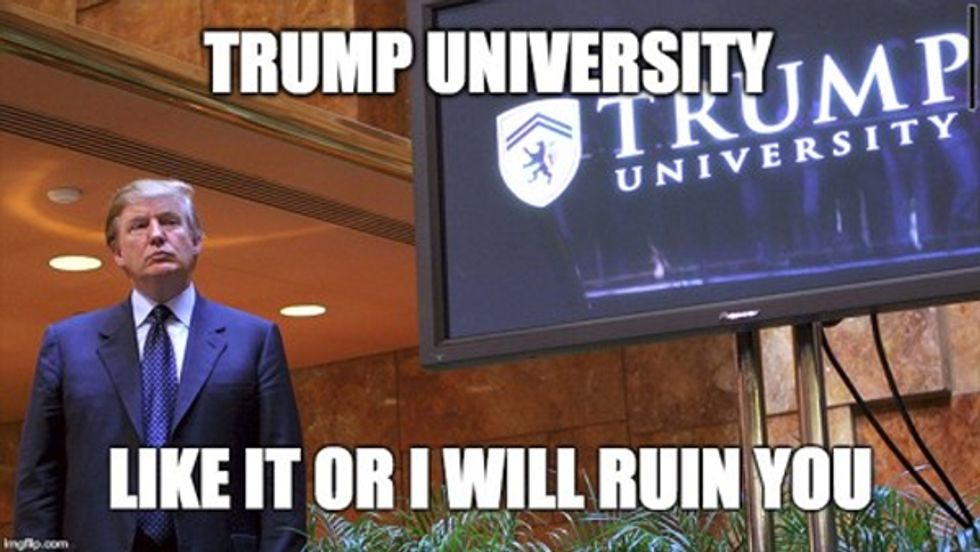 Texas government officials would like you all to know that there is absolutely nothing to see in that story from last week about how Texas was all ready to sue Trump University for being a fraudulent scammy ripoff, but then suddenly the lawsuit went away, thanks to higher-ups in the Attorney General's office. On Friday, Attorney General Ken Paxton's office sent a cease and desist letter to John Owens, the former deputy director of the state Consumer Protection Division, telling him to stop revealing details of the 2010 case, which is closed, do you hear him, CLOSED.

Owens told several media outlets last week that his office had requested permission to sue Trump University for ripping off Texas consumers to the tune of $2.6 million; the suit also sought an additional $2.8 million in penalties and fees. Owens said that in May 2010, higher-ups in the A.G.'s office, then headed by Greg Abbott, said the investigation and lawsuit was over and everything was all good, since Trump U was going out of business and wouldn't be a problem in Texas anymore. Abbott went on to become governor, Trump went on to run for president, and Trump University went on to become the prime example of why Donald Trump is a phony and a fraud (OK, one MORE prime example).

Owens alleged that the decision to quash the lawsuit against Trump was a political move that left Texas consumers “high and dry.”

Years later, Trump gave Abbott $35,000 in political contributions [to Abbott's campaign for governor], the only sizable giving the real estate mogul has done in Texas.

Owens on Friday stood by his statements but said in light of threats from the powerful attorney general’s office he would not comment further other than to defend himself. He had been scheduled to appear for an interview on MSNBC.

“Everything I said was accurate and true,” Owens said. “I’ve done nothing illegal or unethical. I think it’s just a scare tactic.”

"Current and former Assistant Attorneys General have a duty to follow all rules related to the practice of law in the state of Texas,” Mateer said in a statement. "While everyone has First Amendment rights to free speech, the law strictly prohibits attorneys from releasing confidential and privileged information."

The letter lays out a half dozen provisions Owens may have violated under state law and the Texas Disciplinary Rules of Professional Conduct. The provisions center on the possession and distribution of confidential materials related to state investigations.

Owens, for some reason, thinks the state's political establishment is coming down on him like a million-pound shithammer because this is a darned inconvenient time for people to be making waves about the cancelled lawsuit. He insisted he's done nothing wrong, adding, "I think the information I provided to the press was important and needed to be shared with the public."

Texas dropped a 2010 investigation into possible fraudulent business practices at Trump University. Surely it's a coincidence that Trump later took an unusual interest in donating to Greg Abbott's campaign for governor.

We suppose it's worth mentioning that A.G. Ken Paxton also is facing his very own federal securities fraud investigation, so maybe he's empathetic to the pain felt by a businessman who's been unjustly accused of frauding.

Also on Friday, former Texas Deputy Attorney General David Morales, who headed the Consumer Protection Division at the time, issued a statement saying that he was the one who had killed the lawsuit, and then-A.G. Abbott had nothing to do with it, didn't even know about the decision at all, no way, man:

“My decision to approve the request to investigate and to devote state resources to that investigation was made without regard to the fact that the company was associated with Donald Trump,” David Morales, who managed nearly a dozen civil litigation divisions during Abbott’s tenure as attorney general, said in a statement circulated Friday.

It would be incredibly cynical for anyone to suggest that Morales, now in private practice, might be playing the role of fall guy for the decision to quash the lawsuit, because such things are simply unthinkable. The man said it was his decision, and that's all there is to it. And if Donald Trump later gave a large amount of money to Greg Abbott's campaign, then obviously that's because Trump recognized what a fine governor Abbot would become. Just like he recognized what a fine Attorney General Pam Bondi would be in Florida, and there's no way his campaign contribution to her made an investigation go away, either.

Morales's statement explained there was no need to go after Trump University to seek reimbursement for consumers who'd been bilked for phony real estate seminars, since Trump University, already busy failing, agreed to stop doing business in Texas:

“That agreement to permanently and immediately leave Texas was, in my opinion, the most important element of resolving this investigation,” the statement said. “It ensured that no further Texas citizens would be exposed to the company and it did not preclude those consumers who felt they wanted a refund to demand it from Trump University or in court.”

So that was nice of the state, to leave people on their own to seek restitution. Even assuming the official story is 100 percent true -- and why wouldn't we assume that? -- you have to be impressed by Texas's approach to consumer protection: We'll keep you safe from this business that's going belly-up anyway, and if you already lost money to them, well, sucks to be you, you could always ask for a refund or sue those guys. You should have been more careful. Now let's go deregulate some chemical factories!

For his part, Gov. Abbott tweetsplained Friday that there was nothing to the story at all, and of course this is all just a big black eye for journalists who clearly had a liberal agenda.

Maybe when President Trump loosens the libel laws, Abbott can sue everyone who says mean things about him, too.