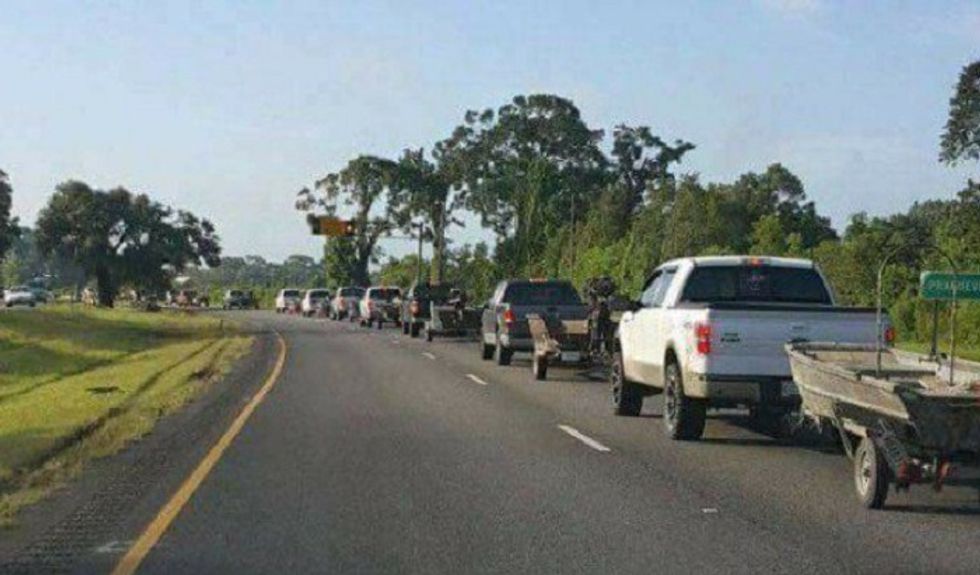 See? Helpers. They really are most of us

At a time when it seems like America is full of awful people who'd happily welcome a return to a nice state of civil war, when the president is a fatuous idiot who has no idea what he's doing, and when really pretty much everyone is terrible, let's take a moment to remember that most of us have some heroism inside us, and a lot of us can be pretty damned impressive when we're called on to help others. Let's have some appreciation for all the neighbors helping neighbors in Texas, because that's just what you do.

The "Cajun Navy," a loose-knit group of Louisiana volunteers who organized to help out after Katrina in 2005, has headed to Houston with their boats and trailers, where they're using social media to help supplement the official rescue response. On a Hurricane Harvey Facebook page, Cajun Navy member Gary Davis of Youngsville, Louisiana, said they were on the way, and asked for as much detail as possible to ensure quick help:

People began asking for help, and they got it, too:

Katie Heaslip Pechon, of Madisonville, Louisiana, told NOLA.com Sunday that she and over 100 other Cajun Navy volunteers were working in Houston:

She said volunteers from Bayou Gauche and New Orleans are "headed out" to Texas "right now" to provide aid to residents in need. She stressed that people with boats are coming "out of the woodwork" to lend a hand. The Cajun Navy is also paired up with southeastern Louisiana storm spotters, she added.

Lots of boat heroes all over the area; this rescue was photographed by LA Times photojournalist Robert Gauthier:

LA Times reporter Matt Pearce has the details, which involves rescuers rescuing some guys who went to rescue others:

At the water's edge, a Houston Police Department high-water rescue boat hauled out a trio of men in their underwear: Alex Domingues, 41, Mitchell Calderon, 19, and Emanuel Calderon, 20, all of them grinning. They had stripped down to their skivvies to swim to the rescue of an elderly man and woman, who by now were also in the boat.

"We seen the lady in her walker trying to walk on the other side of the water," Emanuel Calderon said. "We took off our clothes — less weight."

The man they helped rescue was Frank Andrews, 74, who has difficulty walking after four back operations in recent years. One of the Houston officers asked Andrews if there was anyone the authorities could call to notify that he was OK.

"I got nobody to help me, bottom line," Andrews replied, sitting in a walker that converts to a chair. "It's just the way it is. I don't have a wife or a girlfriend.”

Andrews had tried to wait out the storm in his home, but it flooded, and he had no flood insurance: "shame on me," he said. "It's a quagmire, man." While he was waiting at the side of a flooded freeway for help, the three young men swam over to help him, wrapping a sheet of plastic over his shoulders to keep him dry while waiting for a boat to come.

Then there was Daniel Gross, a 15-year-old kid who was helping his dad use a kayak to rescue neighbors who'd been flooded out. At one point, he got separated from his dad and the kayak, and waited on top of a flooded car until a police boat picked him up. Once reunited with his father, he headed right back out to keep helping people.

Or give a listen to this brief NPR story about a hero with no boat, Mashon Hunt, a 17-year-old from Rockport, Texas, who was one of several people who found the doors of a local elementary school open, and with her mom, pitched in to help provide for some 250 locals who made their way to the school:

You really can't go far on Twitter without finding more evidence that people are, as the little girl said in her diary in 1944, really good at heart:

Were there some people who took the opportunity to be A Idiot? Of course -- at least on Twitter, though not, apparently, on the ground or the water in Houston. Some entrepreneurial-success blogger from Godknowswhere dicksplained why red states are better at human decency than stinky leftists:

And A Idiot had Thoughts about how we don't need Big Government, just neighbors in boats:

Yes, there were jerks. You'll be delighted to know that while their sentiments got a few "likes," they mostly elicited replies saying, in essence, either help or shut your piehole. Yr Wonkette doesn't care who the Boat Heroes voted for -- and we know for a fact a lot of them are #MAGA TRUMPs -- we're just glad they were there to help. And that the emergency services and FEMA will be there to help with stuff volunteers can't do by themselves. It's this social contract thing that we're very big on. We really are all just a storm or an earthquake or, on a smaller scale, a car wreck or a job loss from disaster. And we help each other, even the people we yell at online sometimes. (OK, maybe we wouldn't piss on Sebastian Gorka if he were on fire, but then again, we might.)

If you're in a mood to help, we have a ton of links in our earlier Texas article. If you're in an area affected by Hurricane Harvey and you know of someone needing help, the Cajun Navy is urging people to download the Zello Walkie Talkie app (Android link / iPhone link) and type "texas search and rescue" to find the nearest helpers. They really are everywhere.

Yr Wonkette is supported by reader contributions. After you've sent money to Texas, please click the "Donate" clicky. If it's a choice, Texas needs it more today. Get back to us later.