Texas Gays Up Marriage For A Sec, EVERYBODY PANIC 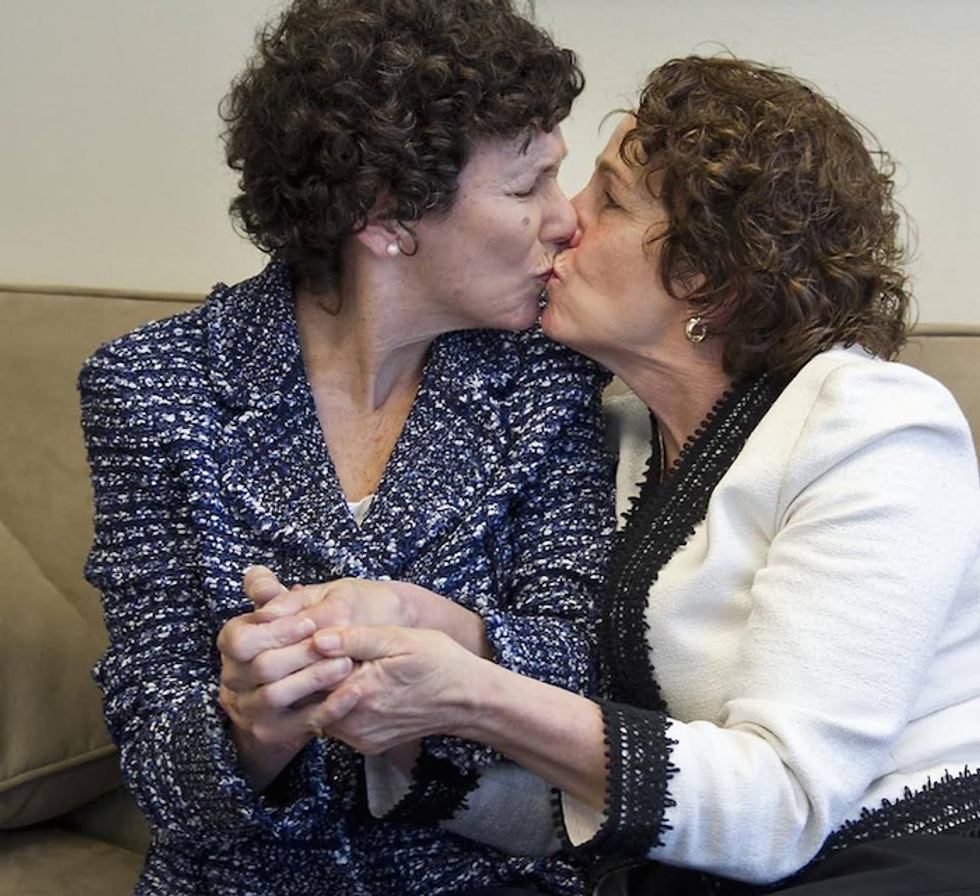 Would you like to guess which state is gaying up their marriage situation? It is Texas! Only they are not doing it neatly, in an easy-to-follow series of coherent events, they are completely donking it up. But go ahead and have some champagne anyway, because did you hear the part where some people got gay married in TEXAS?

On Thursday, in Austin (surprise!) Sarah Goodfriend and Suzanne Bryant got married in the gayest marriage ceremony Texas has seen in a long time. Why was theirs the gayest and not just one of many extremely gay marriage ceremonies that took place this week? Because right after their wedding, the Texas Supreme Court got crunk and tried to rage-quit the 21st century, and they blocked gay marriages in Texas for the immediate future. But you know what? We are pretty sure this will be okay.

Anyway, pay attention while you chug your celebratory champagne, and let us weddingsplain what the hell is going on in Texas. Since you read Wonkette very closely and you remember all of the details in all of the stories, you will recall that in February 2014, Federal District Judge Orlando Garcia ruled that Texas' gay marriage ban was unconstitutional (yay!), but he stayed his ruling because he knew the state would appeal, which it did. The Court of Appeals for the Fifth Circuit heard arguments in the case on Jan. 9, 2015, and has not issued a ruling yet. A week later, the Supreme Court decided that yeah, it's time, fools, and decided to review a Sixth Circuit decision upholding the ban. SCOTUS will hand down a decision in June. Per our hero Justice Ruth Bader Ginsburg, we think this will all turn out fine.

But maybe June isn't soon enough, seriously, why wait on a civil rights issue? Especially one like gay marriage, which is now legal for something like 70% of Americans at this point? This week, in a totally unrelated probate case, Travis County Probate Judge Guy Herman ruled that Texas' ban on gay marriage was unconstitutional. You guys, we are talking about a local probate judge in Texas, who is clearly a Total Boss. He wrote:

The Court finds that Texas Family Code 2.401, Texas Family Code 6.204(b), and Article I, 32 of the Texas Constitution are unconstitutional insofar as they restrict marriage in the State of Texas to a union of a man and woman and prohibit the creation or recognition of marriage to same-sex couples, because such restrictions and prohibitions violate the Due Process Clause and the Equal Protection Clause of the Fourteenth Amendment to the United States Constitution.

Meanwhile, we have Travis County Clerk Dana DeBeauvoir, another Total Boss, who has apparently been jonesing to hand out gay marriage licenses for years. She said of Judge Herman's ruling, "I think so many of us see this as civil rights issue and that this whole community, the whole nation has been through a conversation about this.” But Judge Herman's ruling did NOT give her the authority to issue any gay marriage licenses.  KXAN reports that DeBeauvoir said on Tuesday she "remains optimistic" the day will come when she is able to gay up all of the Travis County marriage licenses in a really gay way.

And guess what? That day came 48 hours later! Sarah Goodfriend and Suzanne Bryant wanted to get married (and quickly, because Goodfriend has ovarian cancer), so their lawyer was like, hey, DeBeauvoir's on our side, let's sue in state district court to force her to be able to issue the license. District Judge David Wahlberg basically said "hell yes, let's do this." He wrote:

IT IS THEREFORE ORDERED that Defendant Dana DeBeauvoir, County Clerk of Travis County, is hereby commanded forthwith to cease and desist relying on the unconstitutional Texas prohibitions against same-sex marriage as a basis for not issuing as marriage license to Plaintiffs Sarah Goodfriend and Suzanne Bryant.

So Goodfriend and Bryant got married, hooray! But Judge Wahlberg's decision was narrowly written to apply only to those two, so no one else could rush out and get married in Texas. And then, ugh, a few hours later Texas Attorney General Ken Paxon asked the state Supreme Court to issue an emergency order blocking other gay couples from getting married, which of course they did. And now Paxon is planning to go back to the Texas Supreme Court today, to argue that the marriage is void, saying, "[a]ctivist judges don’t change Texas law and we will continue to aggressively defend the laws of our state." He sounds nice! But KXAN reports that he might not have standing to void Goodfriend's and Bryant's marriage license, to which we say HAHAHA we hope that is true.

A few things are clear. Republicans in Texas -- including the attorney general, Gov. Greg Abbott (who rushed to reaffirm his support for the gay marriage ban), and conservatives on the Texas Supreme Court -- are obviously vying to be the last officials in America screaming NOPE as their stupid bigoted ship goes down, while practically everyone else is just standing around laughing at them. A Fifth Circuit decision overturning the ban would be awfully nice for gay couples in Texas, Louisiana, and Mississippi, so maybe that could happen soon-ish, please. And SCOTUS needs to nail this down for good in June, so that everyone can get gay married all day long forever, the end.