Texas Governor Succeeding At Being Biggest Douchebag To Syrian Refugees 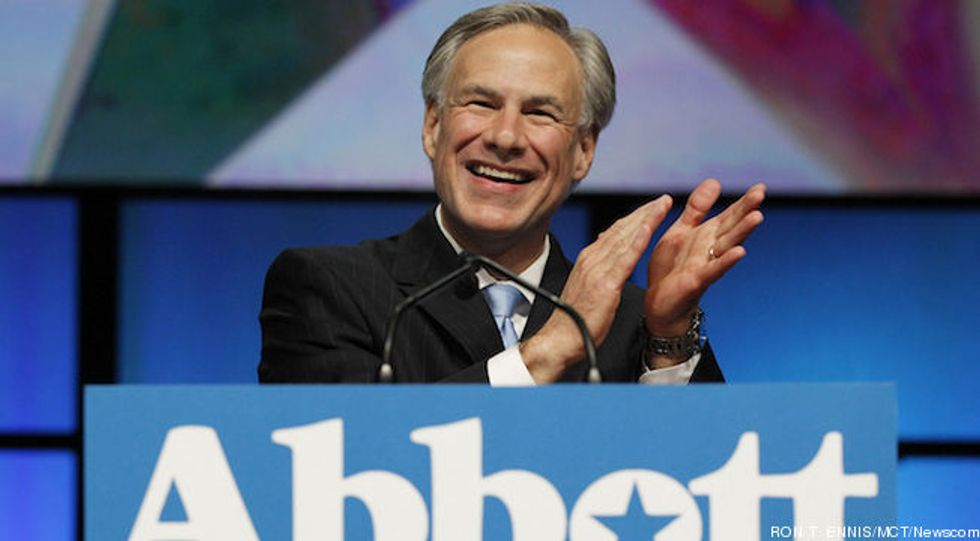 give yourself a hand because lord knows we aren't going to

Let's play a game. It's called "Which Governor In America Is The Absolute Worst?" Haha wait there is no way to win this game because in light of the Syrian refugee crisis, there are so many competing for the title. That said, way down yonder in the Lone Star State, Greg Abbott is doing his damndest to be as completely awful as possible, because everything's bigger in Texas.

What's Abbott up to? Of course he is one of the however-the-hell-many-is-it-now governors who have stood strong against letting Syrian terrorist toddlers into the United States, but Abbott being Abbott, he's really kicked it up to another level. A stupider, meaner level. He's now threatening to defund a relief agency if it has the goddamn gall to help resettle Syrians in Texas because of course he is.

Texas wanted assurances Monday from a major resettlement agency that it will not accept Syrian refugees and threatened legal action if Republican Gov. Greg Abbott's orders are defied.

The International Rescue Committee, a nonprofit that's based in New York and runs a program in Dallas, gave no indication that it will change course and relocate Syrian refugees somewhere other than Texas. In a statement, the organization said "it is important not to conflate terrorists with the Syrian refugees who are seeking sanctuary in the United States."

OK, so while this sounds awful, it sort of seems par for the course for Abbott, no? I mean, he probably threatens nonprofits just for fun in between his regularly scheduled appointments to execute people and kick puppies. Oh wait, it's not just awful because it is mean-spirited. It's awful because it is actually pretty much totally against the law. First, Bamz has dropped the hammer and reminded all these nitwits that you can't actually bar immigrants based on your ooga-booga pandering to your base fear of Muslins.

The federal government is officially warning governors in states like Texas that they do not have the power to reject Syrian refugees. [...]

the Office of Refugee Resettlement told state officials they would be breaking the law if they denied benefits or services to refugees contingent upon their country of origin or religious affiliation. States that defy the law could face suspension or termination of their refugee resettlement programs[.]

So you can't actually do what you're doing, which is to just bar the door against the terrifying Syrians. Next, you actually can't stop anyone from settling in your state once they've already been vetted through the excruciatingly long refugee resettlement process.

Unlike political asylees, who generally enter the United States without permission and then apply for legal status, refugees enter the country legally after applying for refugee status at a U.S. Embassy or consulate in a foreign country. The State Department's vetting process can take up to two years.

Once a refugee is admitted to the United States, he or she is legally present here. States and governors have no more power to bar them from entering than they could bar entry to a U.S. citizen.

Honestly, our dead grandma understands more about the legal issues surrounding immigration than Greg Abbott does.

Texas keeps trotting out that it shouldn't have to take any more scary furriners because it already took so goddamn many, the state is bursting at the seams with resettled muslins, but do you know how many Syrian refugees Texas has allowed within its borders since 2011? 180. One-hundred-and-goddamn-eighty. We've had college lecture courses with more people.

It is important to take a moment to remind you that while our position on the Syrian civil war is ????? we actually have a much more robust and nuanced position on whether or not the United States should accept Syrian refugees. We unveiled this a few weeks ago and are going to drop it in, giant bolded block quote style, into every piece we have to write about the fact that a rather large-ish chunk of the American political landscape is now dominated by ahistorical jackholes.

We're already getting really fucking sick of having to remind people of this policy.