Texas Judge Was On Mission FROM GOD! 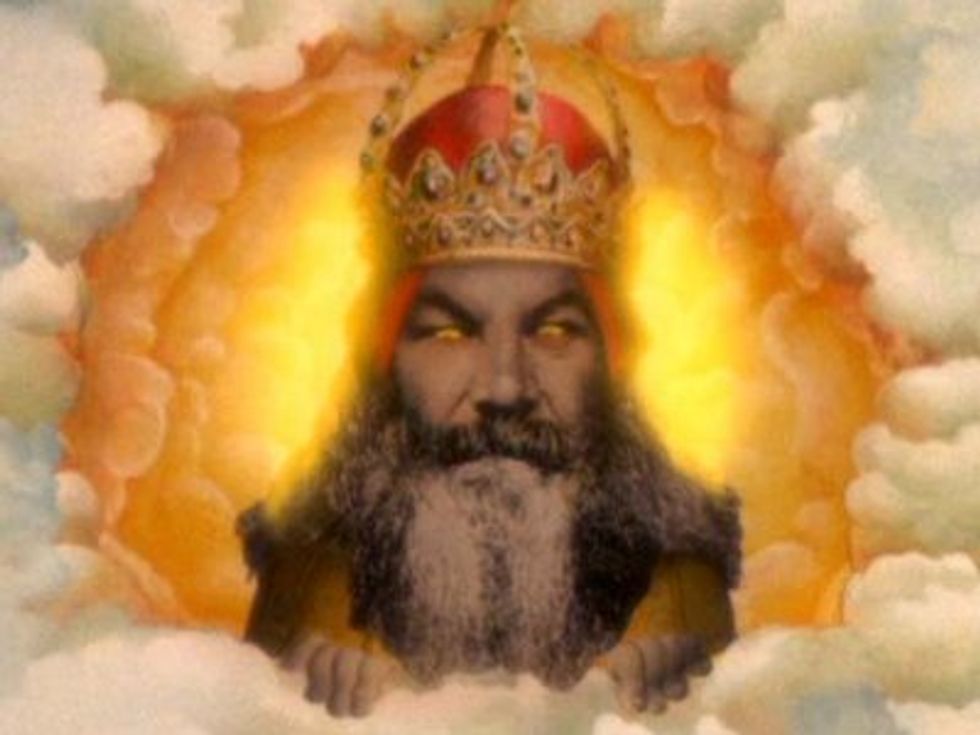 Now to tell some Republicans I want them to run for office...

In what may be either a sign of complete unfitness for office or a bid for a reality-TV gig (why not both?), a state district court judge in Texas earlier this month interrupted a jury's deliberations to tell the jurors God had told him the defendant was not guilty. The jury had already agreed on a verdict -- guilty on one charge and not guilty on another -- and given a bailiff a completed verdict form, so the interruption didn't affect the trial's outcome. But several jurors said they intend to file formal complaints against Judge Jack Robison for his conduct.

The case involved a Comal County woman, Gloria Romero Perez, who was accused of smuggling a 15-year-old female relative from Honduras; an older man allegedly "bought" the girl from Perez and then impregnated her. No connections to pizza parlors or Hillary Clinton were alleged in the case. After the trial and deliberations, when the jury signaled that it had reached a verdict, the San Antonio Express-News reports, Judge Robison came into the jury room to share his special message from the Almighty:

"He said he had thought it over and prayed on it and that God told him that he had to say this," said Mark A. House, jury foreman in the weeklong trial [...] that concluded Jan. 12. "He was obviously troubled, very serious about it. It completely took everyone by surprise. We didn't say anything."

The jury had already decided on a guilty verdict on the main charge, "continuous trafficking of persons," and not guilty on a second charge, "sale or purchase of a child." House said that although some jurors had "anguished" over the sentence of up to 25 years in prison, and some felt Perez should be allowed to be released with time served, they nonetheless stood by their verdict after Robison delivered the actual direct word of God to them, which seems mighty cheeky of them

"We rang the bell again and the judge came back again and reiterated that he didn't think she was guilty," House said Saturday. "Then he left."

Following the jury's decision not to listen to God, Robison recused himself from the sentencing phase of the trial. Perez's attorney, Sylvia A. Cavazos, said it was "probably the most unusual thing I've experienced in 20 years as an attorney," which sounds likely, even in Texas. She added that Robison

apologized in open court to the jury, saying something to the effect that "I apologize but, if God tells me to do something, I have to do it."

The remainder of the trial was given to state District Judge Gary Steel. Ms. Cavasos moved for a mistrial, but Steel ruled that the verdict would stand, apparently convinced by the district attorney's argument that the jury stood by its original verdict despite the intrusion by Robison (and the Most High).

The jury foreman, House, has filed a formal complaint over Robison's behavior, and said several other jurors intend to do so as well. Another juror, Pam Millard, told the Express-News she thinks Robison should resign, saying, "It was crazy. I just couldn't believe it was happening. It was so unethical." We never thought we'd be quite so impressed by the wisdom of a bunch of jurors in Texas.

Ms. Cavasos said that as soon as she got a text saying a verdict had been reached, she headed for the courtroom, but instead, she and the prosecuting attorneys were taken to Judge Robison's chambers:

"I just wanted to let you know what I did," she paraphrased the judge as saying. "I'm sorry if I messed anything up. Y'all can request a mistrial. I felt strongly that she should not be convicted on these facts, so I went to the jury room and I told them what I felt, and I'm sorry. I just felt that I did the right thing."

Goody for him! It's unclear whether Robison is familiar with any of the jurisprudence around the role of religion in the justice system, which is that there should be none. Also, it would appear that Robison heard from the Creator of the Universe at some point after the prosecution presented its case, which is a lucky thing, since if he had, his peculiar habit of ex parte communication might never have come to light. Cavasos said that she had submitted a motion to request a not guilty verdict after the prosecution finished its case, a fairly routine move, but that at the time, he denied that motion:

"If he'd granted my motion, she would have been acquitted, case over and there would not have been any judicial misconduct," she said. "Once it was in the hands of the jury, he can't intervene while they're deliberating."

Oddly enough, notes the Austin Statesman, the official Texas code of ethical guidelines for judges doesn't specifically address a judge interrupting a jury's deliberations (whether with otherworldly messages or just in general), possibly because the code assumes judges aren't complete morons who know nothing about how courts work. It does, however, state judges shall "comply with the law and should act at all times in a manner that promotes public confidence in the integrity and impartiality of the judiciary," which you'd assume would preclude bursting in and saying "I'm on a mission from God, y'all."

It's possible -- ONE WOULD HOPE, WOULDN'T ONE? -- Robison's little divinely inspired visit to the jury will result in an investigation by the State Commission on Judicial Conduct. Robison received a "private reprimand"-- the commission's harshest rebuke -- in 2011 after he'd jailed a man who called him a fool in a child custody case. In that reprimand, the commission said Robison had exceeded his authority by jailing the man for contempt of court without a hearing.

No word yet on whether Fox News has contacted Robison to host a weekend "God's Justice" show. Give it time.