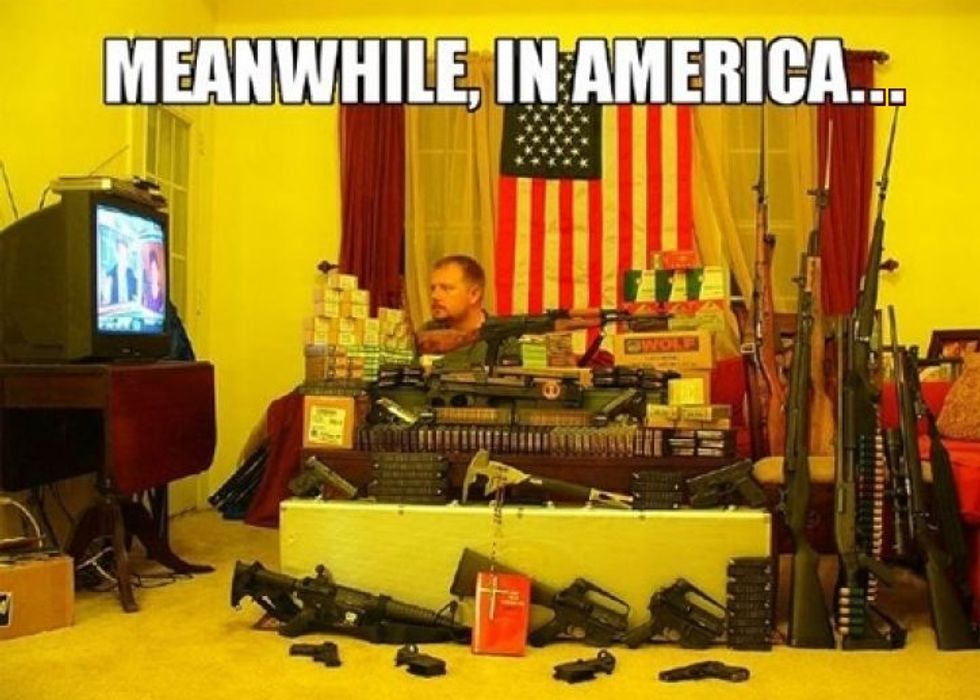 As you probably heard, the National Rifle Association held its annual firearms-stroking meeting over the weekend in Houston. And where a lot of state legislatures would just pass a resolution declaring "Suck My Machine Gun Week" or some such, the Texas House instead celebrated the Holy Armed Presence by passing a dozen laws to make that state even more friendly to gun owners than it already is, because nobody tops Texas when it comes to hospitality. With these bold bills, which include allowing university students to carry handguns to class, the Texas legislature (which Molly Ivins used to call the "national laboratory for bad government") has secured its nomination for Wonkette's coveted Legislative Shitmuffin of the Year Award.

Among the new ways in which you can enjoy your guns in Texas, the bills included measures

Only one of the proposals was shot down (ha-ha!) by House Democrats; a "parliamentary point of order" blocked a bill that would have "allowed the use of a concealed handgun license as valid proof of personal identification," so minority voters will still have to bring their driver's licenses and not a concealed weapon to their polling places.

The biggest fight has been over the proposal to allow students with concealed-weapon permits to carry their handguns into college classrooms, which was opposed by freedom-hating university faculty and administrators. A compromise allowing schools to opt out of the new law -- for a year at a time -- apparently made the bill more palatable, but the campus-carry law may still face strong opposition in the state senate, which has a separate bill that would allow students to keep guns in their parked cars. No word on whether armed guards will be available to help return graded research papers.

Another bill, which would nullify possible federal restrictions on assault weapons or magazine capacity, passed with overwhelming support, although everyone in the room appeared to know it was unconstitutional. Sponsor Steve Toth said in support of his proposal,

"There are 27 amendments in the Constitution but only one says 'shall not be infringed'... The Second Amendment is the amendment that keeps the people free."

The Alliance of Nitpicking American Linguists pointed out that other amendments use a whole bunch of fancy synonyms for "infringed" when talking about things the government "shall not" do, but was shouted down for wearing bowties.

Even though the Texas House may seem to have fallen all over itself to show the visiting NRA a good time, there are still a few frontiers left to be explored. For instance, how about some legislation that would help move forward this commonsense proposal from a speaker at the NRA convention: Store guns in your kid's room, because during a home invasion, you are going to want to run there and grab a gun. But don't get all paranoid! The speaker, Rob Pincus, who runs a firearms-training outfit, was careful to say that the kid's-room gun should be in a safe, jeeze.

Pincus went on to explain that, in anticipating a siege where you need to have guns stashed all over the house, it just makes good sense to keep guns everywhere, because apparently the average American home is located on the set of a Jerry Bruckheimer movie:

“There’s absolutely nothing wrong with staging the gun where you’re most likely to barricade [yourself],” Pincus said. “If you have to run across the house to check on the kids, there’s no reason to take them out of the bathroom and move them to some other room when the bad guy might be wandering around your house.”

Never mind that scenarios like those outlined by Pincus are extremely rare, or that only about 39% of parents who own guns actually keep them locked up in a safe like Pincus recommends. We're pretty sure that no gun owner would ever leave firearms out where a little kid could get ahold of them, except maybe for the twelve million or so news stories in the last few weeks where that happened, including another one today, for fuck's sake, what is wrong with this country?