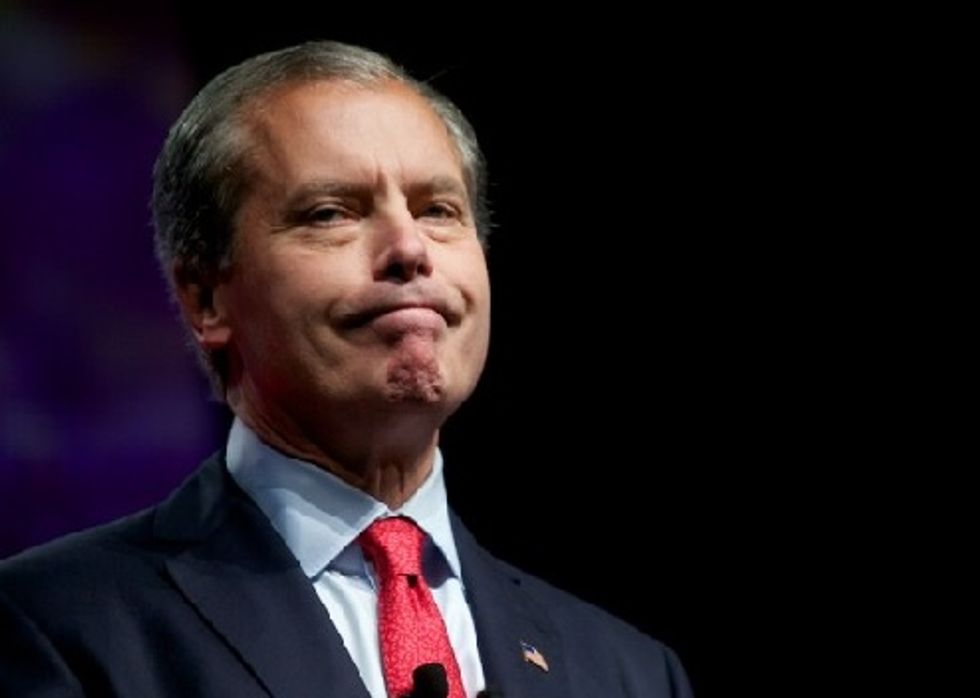 At a Tea Party meeting Monday night at a Lutheran church in Fort Worth, Texas Lt. Gov. David Dewhurst, who is running for re-election, called for theimpeachment of President Barack Obama. This is now apparently something that lieutenant governors now have a say in.

“This election is about protecting you and your freedoms, which are given to you by God, but which are being trampled on by Barack Obama right now. I don’t know about you, but Barack Obama ought to be impeached,” he declared to hearty applause. “Not only for trampling on our liberties, but what he did in Benghazi is just a crime.”

After Dewhurst and other candidates spoke, the crowd was treated to a talk on how scary Muslims have infiltrated the U.S. Government, and then they rounded out the evening by threatening to beat up the only reporter in attendance, because lamestream media.

Dewhurst later elaborated on his case against Obama, outlining for the Texas Observer some very specific charges of freedom-trampling:

“I think this president, Barack Obama, has disregarded federal law. He’s tried to do things which are not authorized under federal law, such as with immigration, such as not following our federal drug laws,” he told the Observer. “He’s created winners and losers out of Obamacare where he has no authority, such as allowing for the unions and big businesses to postpone their mandates for a year.”

Also, Benghazi, where Dewhurst is convinced that Obama watched every detail of the attack as it happened, giggled, and refused to send help. The Observer links to reports debunking that caricature, bless their hopeful hearts, as if a mere State Department investigation counted for anything.

Other candidates for Loot Goober were at the meeting to snipe at Dewhurst and each other, and one, state Sen. Dan Patrick, proved his independence or petulance (same thing for these guys) by stepping away from the group of candidates at the front of the church and standing by himself in a corner.

After the candidates were finished, Cathie Adams, the head of the Texas Eagle Forum (aka the Phyllis Schlafly fangirl fapclub), gave a lecture on the dangerous Muslims who are taking over America right now. Adams, you may recall, is the scholar who discovered that marijuana will fry your brains and make you a Marxist like Obama, and more recently warned that immigration reform will literally usher in the End Times. At Monday's meeting, she explained how adherents of Islam, founded by the “illiterate Arab, Mohammed,” have their hooks in U.S. America, and passed on her dead certainty that Grover Norquist and CIA Director John Brennan are both Sekrit Muslims. The crowd ate it up, and Texas Observer reporter Christopher Hooks noted that several in the audience "were visibly or audibly moved by the threat facing their country," including one gentleman who asked one of the candidates after the meeting, "How are we going to keep the Muslims out of Austin?"

Following the meeting, Hooks, the only reporter at the event, got a personal serving of Tea Party Free Speech:

A tall, burly, bald man, younger than most in attendance, started hovering around me. He seemed agitated. He disappeared momentarily, then emerged from the church with a similarly proportioned friend.

“You’re done,” he said. “You’re done.” He grabbed me by the shoulders and pushed me toward the parking lot where my car was parked. When I protested, the heavy, bald man urged me to “take a swing,” then called me a “whiner.” I said that it generally wasn’t a good idea to muscle out members of the press, regardless of their affiliation, and his friend yelled: “Is that a threat? Are you threatening us?”

“Nah, he’s not threatening us,” said the burly guy. “He’s just a whiner.” Then he snapped a picture of my license plate, and they watched as I drove away.

Yr Wonkette salutes the noble press watchdogs who stand on guard against the lies of the liberal media. Isn't there a song about how tomorrow belongs to them?