Texas Pool Party Cop Somehow Escapes Being Charged With Anything, What A Surprise, Huh? 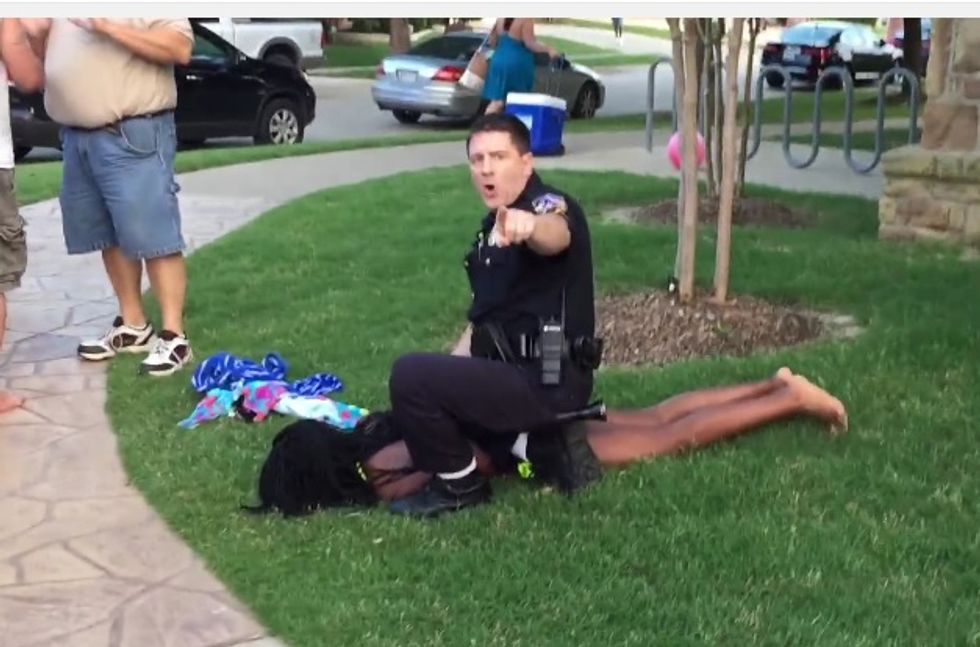 To Protect and Unnerve

In an astonishing development, a Texas grand jury decided against indicting former McKinney Police officer Eric Casebolt after last year's incident in which he was recorded tossing a 15-year-old to the ground and planting a knee in her back, then pulling his gun on two other teens who had come near the scene. Casebolt drew national attention last summer when the cellphone video of him acting like the toughest cop in the world (against a teenage girl in a swimsuit) went viral following a disturbance at a June 5, 2015 pool party. He eventually resigned his job, then issued the ritual notpology to "all who were offended" by his actions, but added that he'd had a bad day. In a further disappointing development, we learned that despite their impressive acrobatic performance at the start of the encounter, no McKinney cops would be chosen for the US Olympics team.

Casebolt's attorney, Tom Mills, was delighted that justice had been done, saying “We’re glad that the system worked in his favor in this case[.]”

The teen’s attorney, Kim Cole, said the grand jury’s decision set a “dangerous precedent” that police are above the law.

“It’s not surprising because this is certainly the tone in this country today,” Cole said at a news conference Thursday, referencing other cases involving police violence against black residents in which officers weren’t charged or convicted.

We're looking forward to experts on Fox News explaining that the fact that Becton wasn't shot dead proves there was no excessive force used in the incident.

Here's the video again, in case you'd forgotten what a fine specimen of community policing Casebolt was:

[wonkbar]<a href="http://wonkette.com/587863/wingnuts-outraged-teen-in-bikini-forced-hero-cop-to-smack-her-around-some"></a>[/wonkbar]The case turned into the usual racial Rorschach test in the media, with silly soft-on-crime liberals saying maybe it's not a good idea for cops to throw teenagers to the ground merely for not leaving quickly enough, or that they shouldn't pull a gun on anyone who isn't actually doing anything dangerous, and defenders of Law-N-Order sighing heavily and pointing out that something has to be done about these thugs who disrespected Private Property, said rude things at a pool party that wasn't authorized in the first place, and were generally rowdy and scary to white people in a gated community. Where quite a few of the black kids lived, too, but hush.

The details of the Texas Rangers' investigation into the incident have not been released. The chief of police in McKinney, Greg Conley, said last June that Casebolt's actions were "indefensible," and the department has at least been making an effort to improve relations with the public (or at least public relations). Following the grand jury's decision, the McKinney PD issued a statement inviting residents to an already scheduled forum titled "Moving Forward, Strengthening Police and Community Relationships." Which is better than a forum titled "Stop Resisting! Stop Resisting!"

Casebolt's attorney said the former cop will wait until the expected civil cases are resolved before seeking new employment. Oh, and here's a happy thought:

The attorney said he doesn’t know whether Casebolt will look for another policing job.

“It wouldn’t surprise me if he did,” Mills said.

Given the logic of so much policing in our fine nation, we won't be surprised if he finds work as a high school resource officer, since he already has "works well with teens" on his résumé.