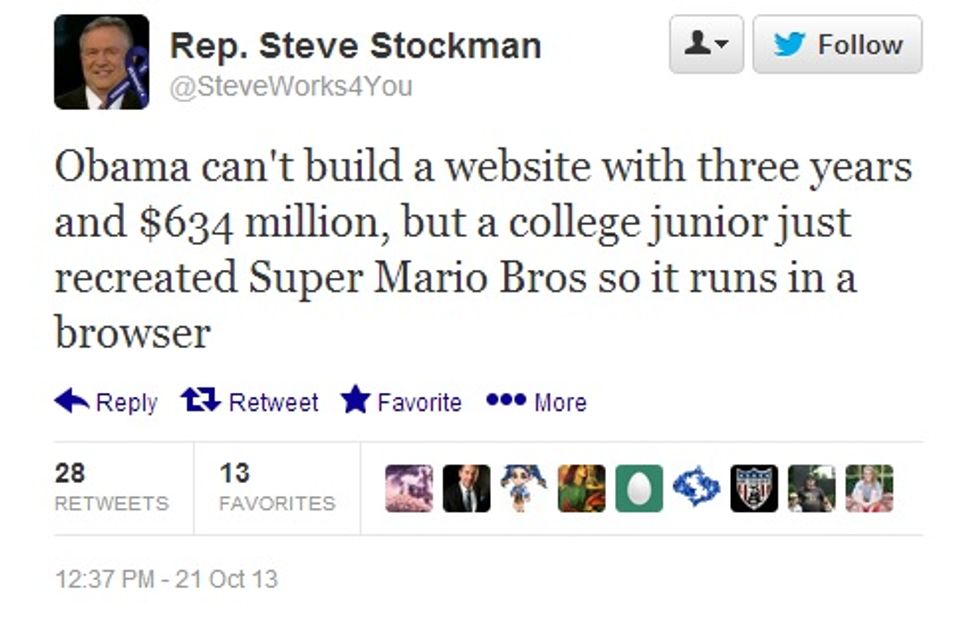 Texas Congressarmadillo Steve Stockman, veteran of such memorable stunts asinviting Ted Nugent to join him for the State of the Union Address and tongue-kissing the Obama Rodeo Clown guy (which we'd somehow forgotten...How did our republic ever weather that crisis?), had this tech-savvy insight today, which an aide probably explained to him as he tapped it out with two fingers. Because after all, rolling out a website that's supposed to handle the insurance marketplaces for consumers in 36 states isn't that much different from coding an in-browser version of an 8-bit videogame from 28 years ago, is it? (Not to take anything away from Josh Goldberg, the Rensselaer student who pulled off the game. It's pretty swell, but it's not a multi-state insurance marketplace, not even if you et all the coins.)

Now that the Great Big Government Shutdown is all over, now it's time for the problems of the Healthcare.gov website to turn into a crisis that is every bit as shocking and unbelievable as the rodeo clown, the teleprompter scandal, or perhaps IRSghazigate, with endless hearings, sober denunciations of the Kenyan Imposter's imcompetence (we happen to know that he wastes a good 20 minutes fiddling around with different fonts, and then just settles on Times New Roman every fucking time), and eventual promises of impeachment. And he can't even get a stupid little website to work.

Also, we feel compelled to note that, in what may be a bit of a setback for Rep. Stockman's analogy, Josh Goldberg's Super Mario Bros. website has been crashing from heavy traffic ever since tech bloggers started talking about how amazing it is.