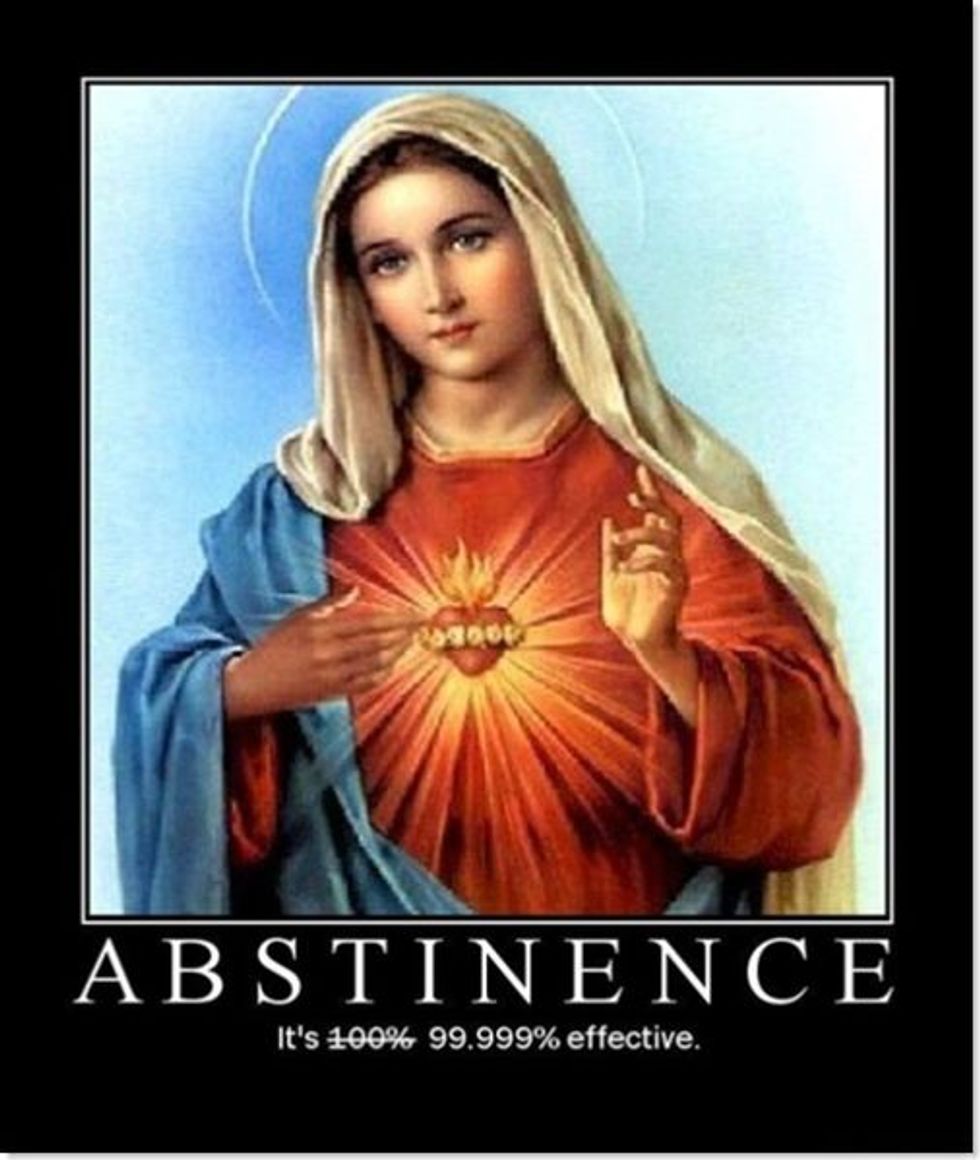 Texas Republicans have a new never-been-tried-before plan to address the state's rate of HIV infections (third highest in the country, congratulations!) and teen pregnancies: even more abstinence-only education.

Texas Republicans voted to divert funds from an HIV screening program into abstinence education Tuesday night, during an often tense and uncomfortable debate that got too personal for some lawmakers. [...]

[State Rep. Stuart] Spitzer’s amendment -- which passed largely along party lines, with support from his fellow Republicans -- to the state’s $210 billion biennial budget would increase its annual abstinence education budget from around $5 million per year for the next two years, to more than $8 million for each year. The HIV/STI prevention program from which Spitzer’s amendment removes funds had an annual budget allocation of around $191 million.

We already know, from ALL the studies -- including a comprehensive nine-year study by the American Congress of Obstetricians and Gynecologists, and also too Bristol Palin -- that "these programs have no beneficial impact on young people’s sexual behavior." Kids do sex anyway, and they get diseases and unplanned babies anyway, because they didn't learn how to have safe sexytime.

Of course the Texas Sex Rangers who control the state lege think differently. Those rebels who refuse to Just Don't Do Sex? Ah, well, no reason to spend money screening them for diseases. They shoulda just not had sex in the first place. That'll learn 'em.

Which is the point of the amendment, according to Rep. Spitzer, who is a doctor and should know better but doesn't. His goal, he said, "is for everybody to be abstinent until they're married." It worked for him, after all:

“I’ve had sex with one woman, and that’s my wife,” said Spitzer, who stated that he was a virgin at age 29 when he got married, and that his decision not to have premarital sex enabled him to become a surgeon and state representative.

And because nobody would bone HIM when he was a teen, that's a plan that should work for all of Texas. Even though he admitted, during the legislature's debate, that so far, the state's abstinence program "may not be working well." YA THINK?

But that's no reason not to throw an extra $3 million a year at it. (Actually, it is.)

The legislature considered a number of other amendments -- a total of 350 were introduced -- during its marathon 18-hour budget debate. While they agreed not to fight it out over "[d]ueling GOP and Democratic proposals to change funding for the state’s Alternatives to Abortion program" (another fantastic waste of tax dollars on crisis pregnancy centers that tell women abortions will give them cancer and make them go crazy and also make God quite irate), they did pass an amendment to ban abortion "affiliates" from distributing sex ed materials in schools, which, as Andrea Grimes at RH Reality Check points out, is just another transparent attack in the state's "ongoing effort to target Planned Parenthood." Too bad, because a recent study found that a new sex ed program developed by, that's right, Planned Parenthood, has been highly effective so far at teaching kids about how to not get diseases and also, shocker, encouraging them to not become sexually active.

But maybe if the state spends enough money telling kids to stay virgins just like Rep. Spitzer, that could work eventually too. Until then, don't mess with Texas. You might get a disease in your Down Theres.