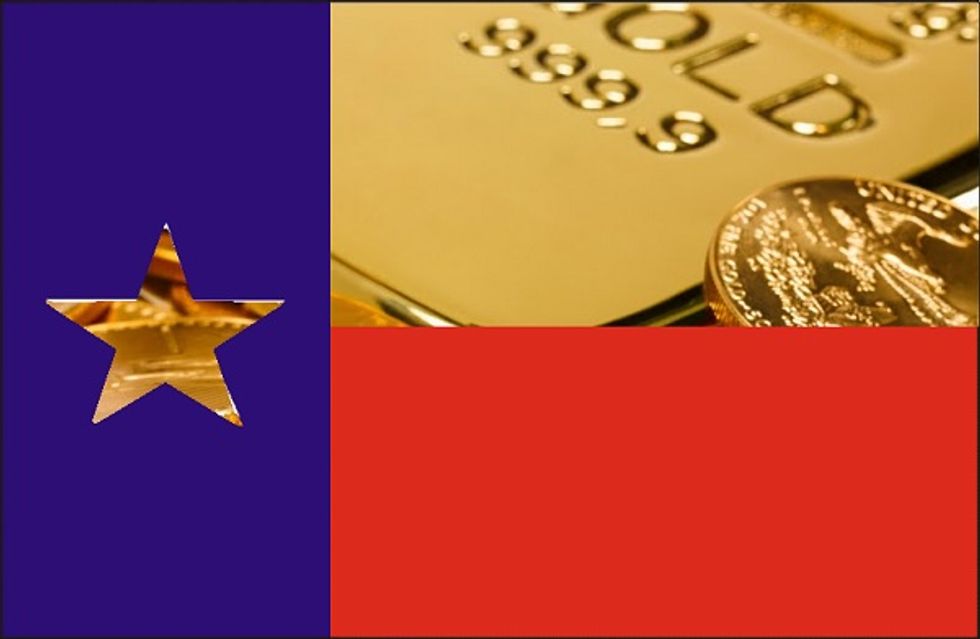 Texas is pretty busy checking off items on its rightwing-obsession bucket list. It's got open carry for handguns, voter ID to keep the Wrong People from voting, it's aggressively not regulating chemical plants, and since you never know when the impending collapse of America is coming, it wants to pump up all the oil right away. Now, to keep some segment of the Glenn Beck crowd happy, Texas is building its very own gold depository so the state will be safe when the rest of "America's" economy goes belly-up. We imagine the state is also getting ready to start hoarding canned food and building a bunker, too. OK, more bunkers.

Gov. Greg Abbott proudly signed a bill Friday that will establish the state's own version of Scrooge McDuck's giant vault, only with no swimming in cold coins allowed (except maybe for top-tier campaign donors). In a statement, Abbott announced that the legislation would "repatriate $1 billion of gold bullion from the Federal Reserve in New York to Texas" and that this would be the bestest thing ever for the financial security of the state:

With the passage of this bill, the Texas Bullion Depository will become the first state-level facility of its kind in the nation, increasing the security and stability of our gold reserves and keeping taxpayer funds from leaving Texas to pay for fees to store gold in facilities outside our state.

Texas will protect The Precious from the nassty Federal Reserves, yess, it will! And when the economy collapses and the rest of America is starving, Texas will have its gold and its oil and its gunses, yess. And when the floods come again, because of Texans' prayers, Texas will gladly spurn the tyrannical "help" of FEMA. Hahaha, who are we kidding, they'll have their hands out just like always!

Also, too, the new depository will allow citizens to deposit and write checks against their own supplies of gold, silver, platinum, palladium, and rhodium, so they won't have to rely on filthy Federal Reserve greenbacks  -- "or 'Yankee dollars' as one of the law's top supporters calls them." Also:

[I]n case the Fed or Obama wants to confiscate Texas's gold, nice try Fed and Obama! In keeping with this suspicion of the Fed and Washington, the new law also explicitly declares that no “governmental or quasi-governmental authority other than an authority of [Texas]” will be allowed to confiscate or freeze an account inside the depository.

The gold depository grew from the mighty mind of tea-party backed state Rep. Giovanni Capriglione, who knew exactly what his constituents wanted and needed: a safe place for all the gold they'd bought from Glenn Beck, and a hedge against Federal Tyranny.

[Capriglione] told the Star-Telegram that when he first announced his interest in establishing a depository in Texas in 2013, he “got so many emails and phone calls from people literally all over the world who said they want to store their gold … in a Texas depository. People have this image of Texas as big and powerful … so for a lot of people, this is exactly where they would want to go with their gold.”

Not surprisingly, a lot of Texan teabaggers think this is the greatest thing since somebody realized you could spit your chewin' tobacco juice into an empty beer can, and it's just the thing Texas needs to prepare for secession from the depraved, Constitution-ignoring Federal Government (which incidentally thinks that secession is an unconstitutional act of war, and proved its commitment to that idea a while back).

Goldbug and Ron Paul fan Geoffrey Pike wrote at Wealth Daily that the Texas gold depository is almost as good as guns!

If the Fed gets too carried away with its digital money printing, then Texas will already have some kind of system to work off of in terms of not using the dollar. I’m not saying it will come to this, but it is symbolic in retaining some liberty, similar to gun ownership in this country. It is not something that will likely be used against a tyrannical government because the symbolism itself keeps tyranny in check.

Of course, true to his small-government beliefs, Pike also warns that even Texas state government is "still a government, and a big one at that" -- and hence prone to tyranny, so let's not get too complacent here. Might not be a bad idea for Texans to strap on their guns and walk around the gold depository once it's built, just to keep the State from getting any funny ideas. Maybe they could melt their gold into bullets! Worked for the Lone Ranger with silver.

Oh, and here's the punchline: Texas doesn't actually have a billion dollars in gold bars in the evil untrustworthy Federal Reserve bank in New York City. Rather, the University of Texas endowment fund has a whole bunch of gold bars that, in a story too complex to repeat, one of its goldbug financial advisors insisted would be the best possible investment. And they're in a bank vault -- and earning a rate of return far lower than the stock market. That gold may or may not be coming back to Texas; the law actually doesn't required it to. But because most, maybe all, of the state's gold reserves will actually be stored with private companies, a whole bunch of gold brokers got behind the bill and it passed, which is awfully nice for the brokers who'll be getting a cut. In fact, there eventually may or may not actually be a single great big gold vault for the state, so at first -- and maybe forever -- it'll be outsourced, but goldbugs shouldn't worry: the firms will all be "licensed and bonded." And everyone, presumably, will have a share.